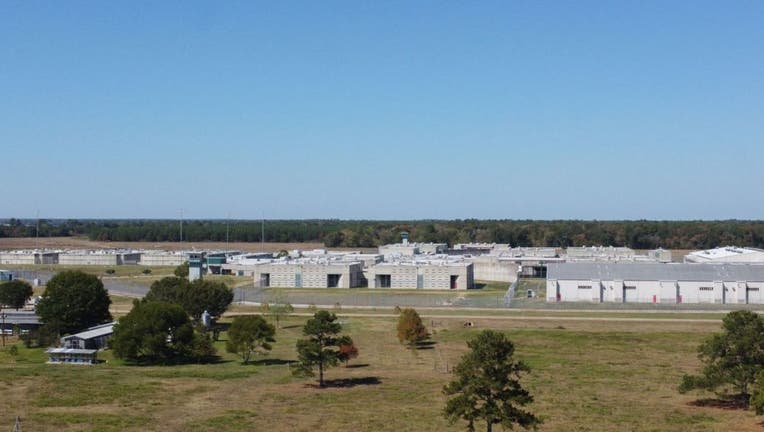 FILE PHOTO. View taken on October 20, 2022 of the Allan B. Polunsky Unit in Livingston, Texas, the Texas Department of Criminal Justice-run facility that houses the state of Texas death row for men.(Photo by FRANCOIS PICARD/AFP via Getty Images)

HOUSTON - A Texas inmate whose lawyers say has a history of mental illness is set to be executed Wednesday for killing his mother and burying her body in her backyard nearly 20 years ago.

Tracy Beatty, 61, is scheduled to receive a lethal injection Wednesday evening at the state penitentiary in Huntsville. He was sentenced to death for strangling his mother, Carolyn Click, after they argued in her East Texas home in November 2003.

Authorities say Beatty buried his 62-year-old mother’s body beside her mobile home in Whitehouse, about 115 miles (180 km) southeast of Dallas, and then spent her money on drugs and alcohol.

The U.S. Supreme Court on Wednesday morning declined an appeal from Beatty’s lawyers to halt the execution. On Monday, the Texas Board of Pardons and Paroles unanimously declined to commute Beatty’s death sentence to a lesser penalty or to grant a six-month reprieve. Beatty has had three prior execution dates.

His attorneys had argued he was being prevented from receiving a full examination to determine if he is intellectually disabled and possibly ineligible to be put to death. They had requested that state prison officials allow Beatty to be uncuffed during mental health evaluations by experts. The experts argue that having Beatty uncuffed during neurological and other tests is crucial to making an informed decision about intellectual disability and evaluating his mental health.

In their Supreme Court petition, Beatty’s lawyers said one expert who examined the inmate determined that he was "clearly psychotic and has a complex paranoid delusional belief system" and that he lives in a "complex delusional world" where he believes there is a "vast conspiracy of correctional officers who ... ‘torture’ him via a device in his ear so he can hear their menacing voices."

Citing security and liability concerns, the Texas Department of Criminal Justice put in place an informal policy last year that would require a court order to allow an inmate to be unshackled during an expert evaluation.

Federal judges in East Texas and Houston and the 5th U.S. Circuit Court of Appeals in New Orleans previously ruled against Beatty’s request for an evaluation without handcuffs. The federal appeals court called Beatty’s request a "delay tactic."

U.S. District Judge Charles Eskridge in Houston last week questioned why Beatty’s lawyers had not raised any claim relating to his mental health during years of appeals, and said requiring handcuffs during such an evaluation is "quite simply, a rational security concern."

While the U.S. Supreme Court has prohibited the death penalty for individuals who are intellectually disabled, it has not barred such punishment for those with serious mental illness, according to the Death Penalty Information Center, a Washington, D.C.-based nonprofit that provides analysis and information on capital punishment.

The Texas Legislature considered but did not pass a bill in 2019 that would have prohibited the death penalty for someone with severe mental illness.

Beatty had a "volatile and combative relationship" with his mother, according to prosecutors. One neighbor, Lieanna Wilkerson, testified that Click told her Beatty had assaulted her several times before, including once when he had "beaten her so severely that he had left her for dead." But Wilkerson said Click had still been excited to have Beatty move back in with her in October 2003 so they could mend their relationship.

Mother and son argued daily, however, and Click asked Beatty twice to move out, including just before she was killed, according to testimony from Beatty’s 2004 trial.

If Beatty is executed, he would be the fourth inmate put to death this year in Texas and the 13th in the U.S. Texas’ last execution for this year is scheduled to take place next week.