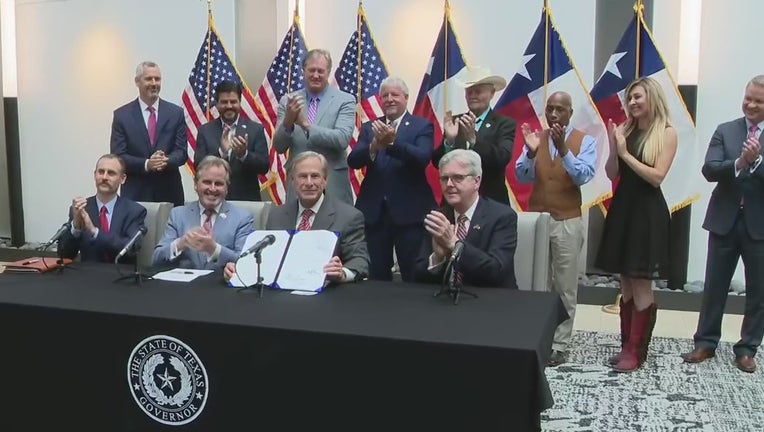 "One thing that all Texans can agree, and that is that we must have trust and confidence in our elections. The bill that I'm about to sign helps to achieve that goal," Abbott said during a press conference in Tyler, where he was joined by state leaders including Lieutenant Governor Dan Patrick, Senator Bryan Hughes and Representative Andrew Murr.

SB 1 is a rewrite of the state’s election code. It tightens voting-by-mail rules, prevents local efforts to expand voting options, increases access for partisan poll watchers, and sets new rules — and possible criminal penalties — for those who assist voters in casting their ballots.

The governor has said SB 1 will ensure "election integrity in Texas," but state Democrats fought the legislation for months. They argued the bill was tailored to make it harder for young people, racial and ethnic minorities and people with disabilities to cast ballots, just as they see these demographics shifting to favor their party.

All of that is now outlawed with Abbott’s signature, and election officials who send mail-in ballots applications to voters who don’t request one can face criminal penalties.

Republicans said the tightened rules rein in powers that local elections officials never had in the first place, while accusing critics of exaggerating the impacts. They also emphasized that polls during two weeks of early voting everywhere in Texas must now be open for at least an extra hour, and that more counties must have polls open for at least 12 hours.

The Texas legislation set off a heated summer of walkouts by Democrats, Republicans threatening them with arrest, Abbott vetoing the paychecks of thousands of rank-and-file staffers when the bill failed to reach him sooner, and accusations of racism and voter suppression.

RELATED: Texas House votes to bring back absent Democrats, under arrest if necessary

Already, the rewrite of Texas’ voting laws are the target of at least three federal lawsuits — including another filed Tuesday — and all contend the changes will have a disproportionate impact on minorities.