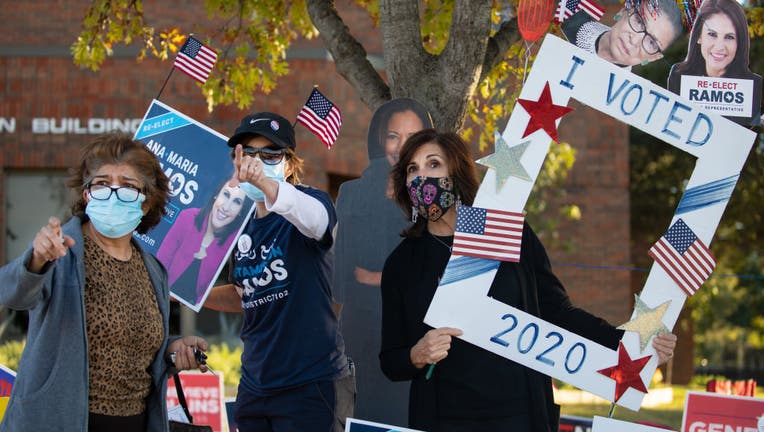 DALLAS, TX - OCTOBER 30: People wait in line to vote at Fretz Park Branch Dallas Public Library on the last day of early voting on October 29, 2020 in Dallas, Texas. Early votes in Texas have already surpassed the total cast in 2016 with Election Day

HOUSTON - Win or lose in Texas on Tuesday, Republicans will still run plenty of America’s state capitols. Maybe even most of them.

As a generation of GOP dominance in Texas wobbles heading into Election Day — the tight polls and record-shattering early turnout of 9 million voters are unlike anything seen here before — nowhere is the state’s recent shift into a battleground more on display than in the fight for control of the state House of Representatives.

For a decade the Texas Legislature has been America’s foremost factory of conservative legislation. Voting restrictions, expanded gun rights, immigration crackdowns, and limits on abortion have passed out of the state House. Other red states, Republicans like to say, have looked to the Texas Capitol as a leader.

But that machine is showing signs of strain. Democrats are just nine seats from seizing a House majority for the first time in 20 years. The GOP still has a commanding advantage in the state Senate and Republican Gov. Greg Abbott has two more years in office, which would leave Democrats little way of reversing laws they have fought in recent sessions.

But a divided Texas Legislature could still spell an end to the intense era of culture wars and bitterly divisive laws that have made the state Capitol an arena for some of the nation’s most explosive battles.

“It forces all sides to find their better angels,” said Democratic state Rep. Trey Martinez Fischer, whose first year in the House in 2001 was also the last time his party ran the chamber. “At a minimum, the tone and the tenor of the discussion will instantly change.”

Martinez Fischer has already declared his candidacy for House speaker and would become the first Latino in Texas to hold the position if he won. So did Texas’ longest-serving female lawmaker, Democratic Rep. Senfronia Thompson, who would be Texas’ first House speaker who is female or Black.

Winning the House is widely viewed as Democrats’ best chance in what has been an unusually competitive election year in Texas. On Friday, Democratic vice-presidential candidate Kamala Harris stopped in Houston, Fort Worth, and McAllen, along the border with Mexico, for an eleventh-hour campaign swing in a state where Democrat Joe Biden has spent few resources. Republican Sen. John Cornyn is also in a reelection battle with Democrat MJ Hegar.

Texas is one of a number of states where Republicans are on the defense in statehouses. They hold full control in more than half of the nation’s legislatures but are in closely contested fights in states including Florida, Georgia, Iowa, and Minnesota.

Driving urgent statehouse battles across the U.S. this cycle is the fact that legislatures next year will begin drawing new voting maps, based on the 2020 census, which can give parties a political edge for the next decade. Outside groups have poured tens of millions of dollars into Texas with that goal in mind. Underscoring the high stakes, one Democratic challenger for a GOP House seat in Dallas reported raising more than $1 million since late September alone.

Republicans are taking the threat to their Texas majority seriously, but also insist they are not as vulnerable as Democrats make it seem.

There have been no shortage of those fights in recent years. Many have centered on abortion, including Democrat Wendy Davis’ 13-hour filibuster in 2013 that temporarily blocked a sweeping anti-abortion law, which ultimately led to the closure of more than half of the state’s abortion clinics. A fistfight nearly broke out on the House floor at the end of the 2017 session that was marked by tense battles over immigration, and that same year, lawmakers were pulled into a summer special session over a “bathroom bill” that targeted transgender people.

After Democrats picked up a dozen seats in 2018, last year’s Texas Legislature was far more muted.

If Democrats win the Texas House this time, it would “send an incredibly powerful message,” said Charlie Kelly, a senior political adviser to the gun-control group Everytown for Gun Safety, which has spent more on Texas this cycle than anywhere in the country.

“It allows, us, frankly, to finally have an opportunity to really set policy at the state level of Texas,” he said. “And I think it shows people you can be competitive anywhere.”

Texas’ factory of conservative legislation may be at risk