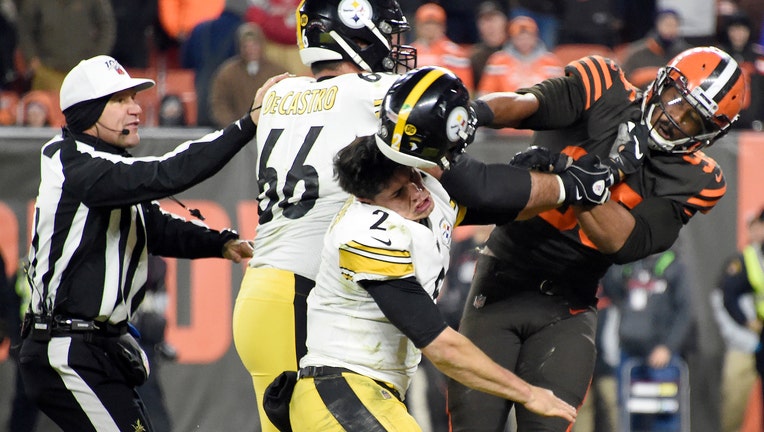 CLEVELAND, OHIO - NOVEMBER 14: Defensive end Myles Garrett #95 of the Cleveland Browns hits Quarterback Mason Rudolph #2 of the Pittsburgh Steelers over the head with his helmet during the second half in the game at FirstEnergy Stadium on November 14 ( Photo by Jason Miller/Getty Images )

HOUSTON - Cleveland Browns defensive end Myles Garrett is all the talk of the sports world after a fight with the Steelers quarterback in Thursday night’s game resulted in him being suspended indefinitely.

Some who’ve followed Garrett’s career since his days at Texas A&M—and watched him assault another player with that player’s own helmet—say it’s the opposite of the Myles they knew.

The fight occurred with seconds left in the game in which the Browns won 21-7. It’s a moment that left a lot of people stunned—especially Pittsburg quarterback Mason Rudolph—when Cleveland defensive end Myles Garrett ripped off his opponent’s helmet and slams him in the head late in Thursday night’s game.

“I was stunned,” said Brent Zwerneman who covers the Aggies for the Houston Chronicle. “I never heard one single bad word about Myles Garrett.”

Zwerneman has known and covered Myles Garrett since his high school days.

“Myles was so kind and good-hearted that he would carry bugs out of their house and set them down in the grass and wave ‘bye’ to them because he couldn’t stand to kill a bug, so when I ask him about that, he said, ‘Yeah, I’m a pacifist,’” recalls Zwerneman. “He said, ‘But when I’m on the football field, things are different. You know I’m supposed to go after the quarterback.’ So when I look back at that quote, I say, well he certainly went after the quarterback.”

In 2017 Myles Garrett made history for Texas A&M as the school’s first-ever number one overall NFL draft pick.

“I thought it was pretty intense,” said John Hillier, a senior at Texas A&M.

Hillier said it was intense, but he doesn’t believe a crime was committed.

Rudolph was not one of the three players suspended Friday, but NFL Network reports he will face a fine. Rudolph appeared to pull Garrett’s helmet partially off first, leading Garrett to pull Rudolph’s helmet off and commit the assault

“Rudolph initiated this, and everyone’s kind of overlooking that,” said NFL Players Association board member and Aggie alum Mickey Washington. “Everyone involved should take some responsibility and no one should get a pass.”