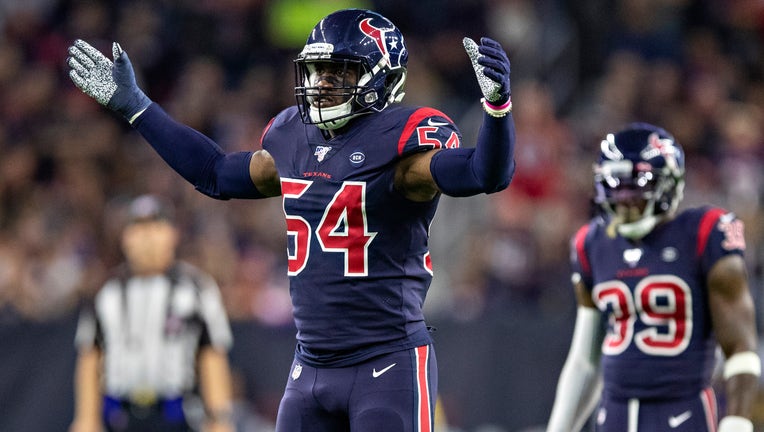 HOUSTON, TX - DECEMBER 1: Jacob Martin #54 of the Houston Texans gets the fans cheering in the first half of a game against the New England Patriots at NRG Stadium on December 1, 2019 in Houston, Texas. The Texans defeated the Patriots 28-22. (Photo

HOUSTON - Texans outside linebacker Jacob Martin was moved by coach and general manager Bill O’Brien publicly saying last month he will take a knee with his players during the national anthem this coming season to help protest racial prejudice and police brutality.

“I think that speaks volumes as a coach,” Martin said. “He doesn’t understand necessarily what some of his Black players go through, but he’s an ally for sure. Someone that is speaking out and using his platform, not only to learn for himself, but to teach those around him. I think that’s very important to have from up top.”

Martin also applauds the efforts of Texans co-founder and senior chair Janice McNair, chairman and CEO Cal McNair and his wife Hannah, Houston Texans Foundation vice president, in trying to make a difference through their ongoing series, Conversations for Change, at houstontexans.com.

“I think it’s important to understand perspective,” Martin said. “I can’t be upset at someone’s ignorance. I can try to tell them about my experiences and hope they go and learn and look for themselves. So I think it’s important that they’re keeping these conversations open and hearing from the people that they trust with Coach (Romeo) Crennel and having former players come back and talk to them about the plight of their people."

“I think that’s very important for this conversation," Martin said. "I think it’s important for people to listen, to learn, to gather as much knowledge as possible because even for myself, I’m learning new things every day from different people.”

To that end Martin and a number of his teammates have come together weekly on Zoom, discussing many of the topics related to social justice that need to be addressed.

“For the past few weeks me and some of the other guys on the team have met via Zoom and talked to leaders within the community, talked to people within government,” Martin said. “The things that we were talking about are essentially police reform, just overall systematic reform. Focusing on the pure numbers within Houston are crazy. I think we have the second-largest county jail population in the country, just behind LA. The majority of those people sitting in county jail are sitting there for a non-violent crime and the reason why they’re sitting there so long is they can’t afford to make bail."

“So bail reform is something that is huge. Often times they’ll sit for two and three years waiting for their court case and then they’ll have a court-appointed attorney that comes in there, after that two-three years they’ve been sitting in county already, and comes in and says you can either try to fight this and sit here for another year and a half or you just go ahead and take the plea, plead guilty and come out as time served. A lot of people do that, but they don’t understand that when they come out they have a felony on their record now. They can’t get a job. So it perpetuates that same cycle over and over again, in terms of the change that we want to see in our community.

One of the politicians Martin and his teammates met with on Zoom last week is Harris County Precinct One Commissioner Rodney Ellis.

Ellis has also served three terms on Houston City Council and more than 25 years in the Texas Senate.

“Just having those discussions with Rodney Ellis and picking his mind on what we can do as athletes to help push this change and be the tree shakers,” Martin said. So that’s what we’ve been focusing on.”

“We were on the call with him and a few other officials and a couple of lawyers,” Martin said. “The conversation was really more about the process in which someone is arrested and released from prison or jail and how we can use our platform. I think Rodney Ellis, he mentioned Jesse Jackson’s the tree shaker and the jelly maker quote. How we can use our platform to be the tree shakers to the jelly makers in politics. That was pretty much our conversation.”

And Jacob Martin says it is important for athletes to embrace conversations like this and make their presence felt in places like Houston City Hall.

“As athletes, we have a unique position where our name carries a lot of weight in terms of opening doors for us,” Martin said. “If I call or Mike Thomas or J (Justin) Reid or OB (Bill O’Brien) or somebody from the Texans organization calls, that carries a lot of weight in the city of Houston and the state of Texas. We’ll get a lot more answers and we can hold people accountable. We can be the voice of our community. We can be the bridge to our community from the government.”

And Martin said that includes focusing closely on the significance of police reform.

“The whole system is broken,” Martin said. “I would say we as a collective understand the system has failed us and that the system is broken. Just in Houston mind you, people of color are 16 times more likely to be arrested for drugs and put in prison. These are non-violent drug offenses...When the drug use is the same among the demographics, white, Black, brown, Asian, whatever. Why is that? Makes no sense. The disparities in terms of police stops and arrests make no sense. It really doesn’t. Murders at the hands of police, people of color, are three times more likely to die with an interaction with a police officer. There’s no way I should have to fear for my life when I’m getting a simple traffic violation. It should be a normal thing. I get my ticket and I go, but no. I have the fear in the back of my mind if I move or I make any kind of sudden movements. I shouldn’t have to drive with my wallet on my dashboard and things like that. I shouldn’t have to do that and the fact that people of color do is the reason why we need to change how we train and prepare and how we do things with the community because clearly our formula for the police isn’t working and hasn’t been working for a very long time."

Martin said his mission in life is to make a difference outside the game of football.

“For as long as I’ve been alive and as long as I continue to live, it will always be to stand up for those who are marginalized,” Martin said. “It will always be that way. No matter what I’m doing. I don’t think I will necessarily per se get into politics or government, but I will always use my voice and platform to create change for sure.”

And Martin hopes to play a role in eliminating tragedies like the one involving the late Elijah McClain last August in his hometown of Aurora, Colorado.

“That was terrible, terrible,” Martin said. “That one really hurt me because I never would have thought something like that would happen in Colorado, a place where people are loving and caring. A city that’s been through so much trauma the past 10-20 years. I never would’ve expected that to happen in terms of an unarmed black man, doing absolutely nothing, living his life, trying to go home at night. Stopped for no reason and killed, cold blood, murdered. There’s no other way you can say it. He didn’t deserve it. That’s a very surreal moment. He was doing absolutely nothing, nothing. The fact that people are still having a debate about this is absurd. It’s outrageous. I don’t know what’s to debate. There’s nothing to debate, terrible.”

On the football front, Martin said he and his teammates are trying to prepare for training camp as if its business as usual until they are told otherwise.

“I think that’s the smart thing to do,” Martin said. “We really don’t know when we’re gonna be back up and running. Guys are reading certain things on the internet, just a lot of speculation. Guys are just trying to stay ready, continue their offseason process, and try to be as healthy as possible. That’s why we’re in the situation we’re in now because people didn’t take it seriously, social distance, and be mindful of their neighbors in terms of their health.”

And Martin points out doing all of those things while trying to play in the NFL will be a challenge that is off the charts.

“For sure there’s a danger factor because there are a lot more variables when you have 75-90 guys in a facility all day,” Martin said. “What does that look like? How do you social distance in meeting rooms? You can’t social distance in football. It’s contact. There’s a lot of breathing and things that are going on within close spaces. I think that is a little bit of a fear factor because you don’t know what that’s gonna look like. It’d be a lot different if cases were going down, on a decline. This would be a completely different conversation.”