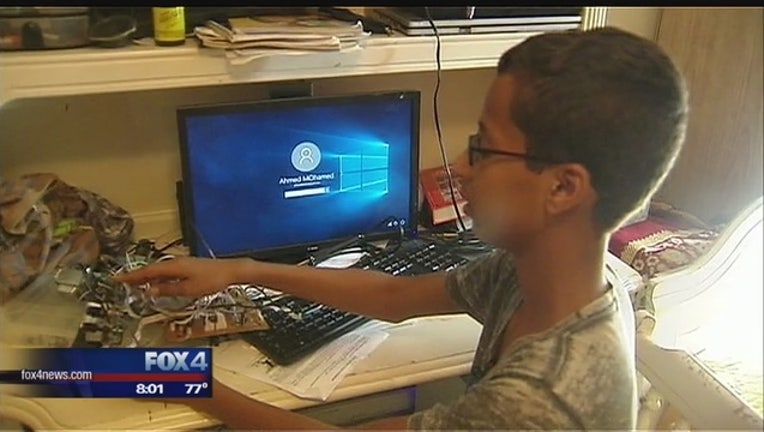 DALLAS (AP) — A 14-year-old Muslim boy who was arrested after a homemade clock he brought to school was mistaken for a possible bomb will be moving with his family to the Middle East so he can attend school there, his family said.

Ahmed Mohamed's family released a statement Tuesday saying they had accepted a foundation's offer to pay for his high school and college in Doha, Qatar. He recently visited the country as part of a whirlwind month that included a Monday stop at the White House and an appearance Tuesday at the U.S. Capitol.

"We are going to move to a place where my kids can study and learn, and all of them being accepted by that country," Ahmed's father, Mohamed Elhassan Mohamed, told The Dallas Morning News before boarding an airplane from Washington back home to Texas on Tuesday.

The statement said the family has been "overwhelmed by the many offers of support" since Ahmed's arrest on Sept. 14 at his school in Irving, a Dallas suburb. The family said it accepted an offer from the Qatar Foundation for Education, Science and Community Development to join its Young Innovators Program.

Ahmed, who along with his family will relocate to Qatar, received a full scholarship for his secondary and undergraduate education. Ahmed said he was impressed with the program and thinks he'll "learn a lot and have fun, too."

Ahmed took a homemade clock to his high school to show a teacher, but another teacher thought it could be a bomb. The school contacted police, who handcuffed the boy and took him to a detention center. The school suspended him for three days.

A police photo of the device shows a carrying case containing a circuit board and power supply wired to a digital display. Police ultimately chose not to charge Ahmed with having a hoax bomb, and the police chief has said there was no evidence the teen meant to cause alarm. His parents later withdrew him from the school.

But in recent weeks, the teenager has been traveling the world. Ahmed earlier this week told The Associated Press that he had visited Google and Facebook, along with other companies and institutions. He also visited with the president of Sudan, Omar al-Bashir, which has prompted some criticism because al-Bashir is wanted by International Criminal Court on charges of genocide and war crimes for atrocities linked to the Darfur fighting. Ahmed's father is a Sudanese immigrant to the U.S. and a former presidential candidate in Sudan who ran opposing al-Bashir.

Before attending "Astronomy Night" at the White House on Monday, where he chatted briefly with President Barack Obama, Ahmed said he was grateful. He said the lesson of his experience is: "Don't judge a person by the way they look. Always judge them by their heart."

On Tuesday at the U.S. Capitol, Ahmed stood alongside California Rep. Mike Honda as the Democrat praised the teen, saying Ahmed had used his negative experience to raise awareness about racial and ethnic profiling. Honda and more than two dozen other congressmen sent a letter to Attorney General Loretta Lynch last month calling on the Department of Justice to investigate Ahmed's detention and arrest.