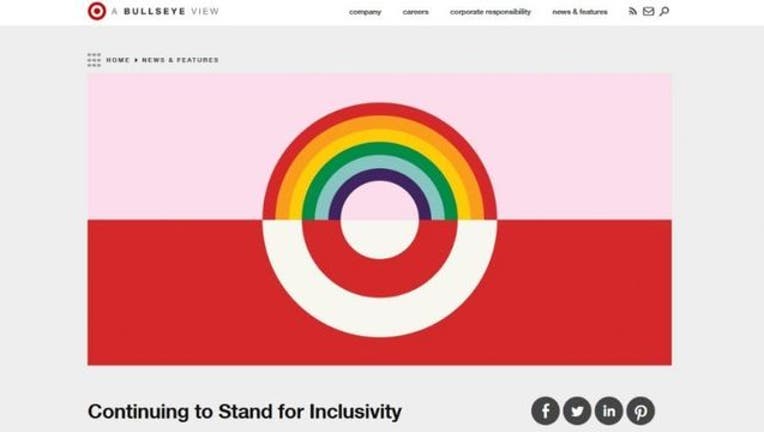 NEW YORK (AP) — Consumer backlash is growing against Target's stance on what type of bathrooms its transgender customers and employees can use.

Two weeks ago, the Minneapolis-based discounter issued a statement that said customers and employees can use the restroom or fitting room that "corresponds to their gender identity." The move made Target the first major retailer to take such a prominent position on the issue, and won praise from supporters of transgender rights. But Target's position has also sparked criticism on social media.

One online petition started by a group called The American Family Association, a conservative Christian advocacy group, calls for a boycott of Target stores. And customer surveys from two research firms separately show that Target's reputation has taken a hit.

Still, analysts say it's hard to gauge the impact —if any— the backlash has had on Target's business.

Target's spokeswoman Molly Snyder declined to comment for the story, only saying the retailer stood by its earlier statement. She also declined to say whether the backlash has affected sales.

Target's statement comes amid a national debate over whether to restrict transgender people to using public bathrooms that match the sex listed on their birth certificate. North Carolina is facing heat for its recent ban on local anti-discrimination ordinances. Still, other states are considering legislation similar to that adopted by North Carolina.

By catapulting to the front lines of a highly polarized debate, Target shows the difficulties companies face when they weigh in on issue of gender or sexuality. Increasingly, customers are using social media to air their concerns, putting pressure on corporations.

"Brands need to be sensitive to public opinion, but this is a tough one because it is a no-win situation. Either way, you are going to turn off customers to the brand," said Robert Passikoff of Brand Keys, a consumer research firm, which saw Target's reputation fall 10 points to 74 over the past two weeks. A score below 70 means that a brand is in trouble.

However, Ken Perkins, president of Retail Metrics LLC, a retail research firm, says that in the long run, Target's stance could actually help it, creating some "good will."

Wal-Mart, the nation's largest retailer, has remained silent on the restroom issue. But CEO Doug McMillon was among a group of CEOs who last year opposed the so-called religious freedom laws that allow faith-based groups to deny services or jobs based on sexual orientation. Wal-Mart's outsized influence was credited for pressing the governor of Arkansas, the home of Wal-Mart's headquarters, for signing an amended version.

Analysts believe that companies are watching closely the debate over the bathroom policy before wading in.

In a statement on its website, American Family Association said that Target's policy is "exactly how sexual predators get access to their victims." It's advocating that Target should keep separate facilities for men and women, but also have a single occupancy unisex bathroom option for the trans community and for those who like using the bathroom alone.

Bryan Kemper, youth outreach director for Staying True, the youth arm for Priests for Life, an anti-abortion group, said that last week he put up a video critiquing Target's decision on his Facebook page that has now garnered more than 250,000 views. He is boycotting the retailer. "Everyone deserves privacy," he said.

Target does have many supporters. Claire Guyer, who lives in Bowling Green, Kentucky, says she's supporting Target's position and will continue to shop there.

"People are not educated as to what this really means," she said. "It's a matter of human rights. I'm glad that some company is taking a stand."

Ted Marzilli, CEO of YouGov BrandIndex, which measures reputation at major brands daily, said recent consumer surveys showed that the percentage of consumers who would consider buying items at Target the next time they want to go shopping fell dramatically. But he believes the impact will be short-lived as the focus moves to other companies.

"This will blow over," he said.