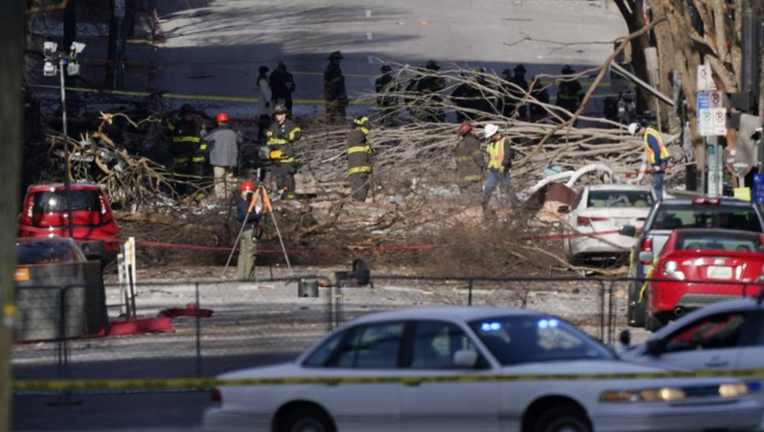 The Latest on the Christmas Day bombing in downtown Nashville:

Authorities say the man suspected off setting off a bomb in a recreational vehicle that rocked downtown Nashville on Christmas Day died in the explosion.

Investigators said they used DNA to identify the remains as Warner’s. The FBI said they also matched the RV’s vehicle identification number to a registration belonging to Warner.

Federal agents and police had searched a home in suburban Nashville associated with Warner.

Authorities did not immediately provide details about a potential motive.

Douglas Korneski, the special agent in charge of the FBI’s office in Memphis, said there was no indication anyone aside from Warner was involved in the bombing. Three people were injured and dozens of buildings were damaged.

Authorities in Tennessee have shut down a road east of Nashville after stopping a box truck that they said had been playing audio "similar to what was heard" before a recreational vehicle exploded in downtown Nashville on Christmas Day.

The Rutherford County Sheriff’s Office says on Twitter that law enforcement officials had shut down a section of highway in Wilson County, just east of Nashville, on Sunday to investigate a white box truck parked on the side of the road. Authorities had sent out a robot to investigate the vehicle as officials stood far back, monitoring the situation.

Sheriff’s officials said the truck had been playing the audio when it was parked at a convenience store around 10:30 a.m. at the Crossroads Market in Walter Hill. The driver left the parking lot and was pulled over by deputies in nearby Wilson County. Officials said the driver has been detained by law enforcement.

A Wilson County dispatcher said the road that was shut down was Murfreesboro Road between Cedar Forest Road and Richmond Shop Road.

Deputies said they had also evacuated residents in the area as they continued to investigate.

Before the RV blew up, it blared a recorded warning calling for people to evacuate, and then the 1964 song "Downtown" by Petula Clark. Sheriff’s officials did not specify what the box truck was playing.

Metro Nashville Police Department Spokesman Don Aaron confirmed Warner’s identity Sunday. Federal and state investigators are trying to determine who set off a bomb inside a recreational vehicle Friday morning, injuring three people and damaging more than 40 businesses. They are also working to identify human remains found at the scene.

Separately, a law enforcement official told The Associated Press that federal investigators have started examining Warner’s digital footprint and financial history. They are also examining a recent deed transfer of a home in suburban Nashville.

The official could not discuss the case publicly and spoke to The Associated Press on condition of anonymity.

The official said forensic analysts are reviewing evidence collected from the blast site to try to identify the components of the explosives and are also reviewing information from the U.S. Bomb Data Center for intelligence and investigative leads.

Federal agents are examining a number of potential leads and pursuing several theories, including the possibility that an AT&T building was targeted. The bomb caused damage that affected communications in several states.

AT&T says it has been rerouting service to other facilities as the company works to restore a building that sustained heavy damage after a bomb exploded in downtown Nashville on Christmas Day.

The company said in a statement Sunday morning that mobile service has been restored to many areas that were affected by the blast. The company says it is bringing in resources to help recover affected wireline voice and data services and expects to have 24 additional trailers of disaster recovery equipment at the site by the end of the day.