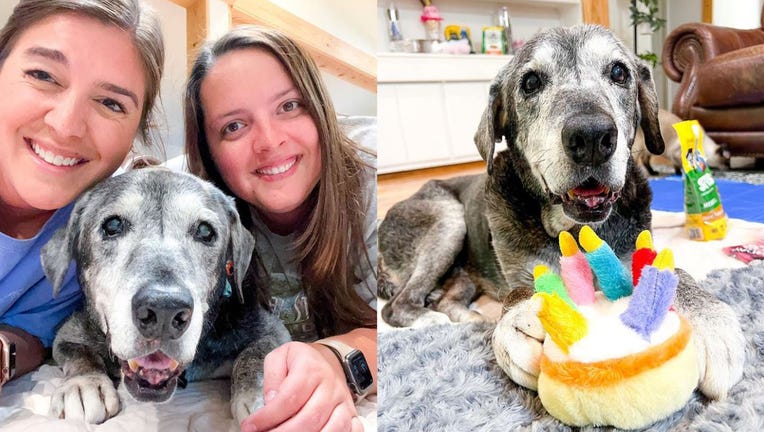 Lisa Flores (L) and Lauren Siler (R) are pictured with 19-year-old Annie, alongside an image of Annie with a birthday cake toy. (Credit: Lauren Siler)

DALLAS - When a 19-year-old dog named Annie was surrendered to an animal shelter in Dallas, Texas, veterinarians thought she only had a month to live. But four months later, the black Labrador retriever mix is living out her days with two best friends who are showering her with love and helping to cross off a bucket list of adventures.

Annie is being fostered by friends and roommates Lauren Siler and Lisa Flores. Siler first learned about Annie after seeing a post on social media that she had been surrendered to a Dallas animal shelter.

"I was coming home from a family trip in Anchorage, Alaska, and knew I had to find out how to get her," Siler told FOX Television Stations, sharing that her dog, Bear, had died earlier this year.

"I then showed her picture to my roommate and best friend Lisa who saw the picture and immediately said, ‘We have to get her,’" Siler continued.

After doing some digging, Siler learned Annie had been taken in by the nonprofit The PAWerful Rescue, based in Royse City, Texas. The nonprofit, which rescues animals in need and helps to find them loving homes, was looking for someone to foster Annie.

"I reached out to them to tell them we were interested in fostering Annie," Siler said of the PAWerful Rescue. "They were very transparent about Annie’s condition and that the vets estimated we would have a month with her. They brought her over to meet us and the rest is history."

The roommates had not fostered an elderly dog in the past. Noting the difficulty of having to put down her dog Bear, Siler said the experience taught them "to look out for signs they are ready to go and ways you can make them comfortable as their body starts to age and change."

"We had to be honest with ourselves that there would be an impending heartbreak in stepping up to foster Annie, but recognizing the heartbreak of her being alone in a shelter in her last days was greater than our fear of eventually having to let her go," Siler told FOX Television Stations.

And so, when Annie came to live with them, the friends were prepared to spoil the elderly dog with lots of love. Described as "a calm, sweet soul," Annie appears wise in her old age, "and every once in a while we see the puppy in her," Siler said.

The friends have shared Annie’s adventures on Siler’s Instagram account @DallasAnimalFoster and even set out to create a bucket list for the pup to cross off in her last days. Since June, Annie has celebrated Christmas in July, had a birthday party, enjoyed a spa "pawdicure" day, and had a picnic and a professional photoshoot.

"Every time we take the camera out she lights up and smiles for us affirming that we are doing the right thing and that she’s happy," Siler said. "You can actually see her smile in almost every picture!" 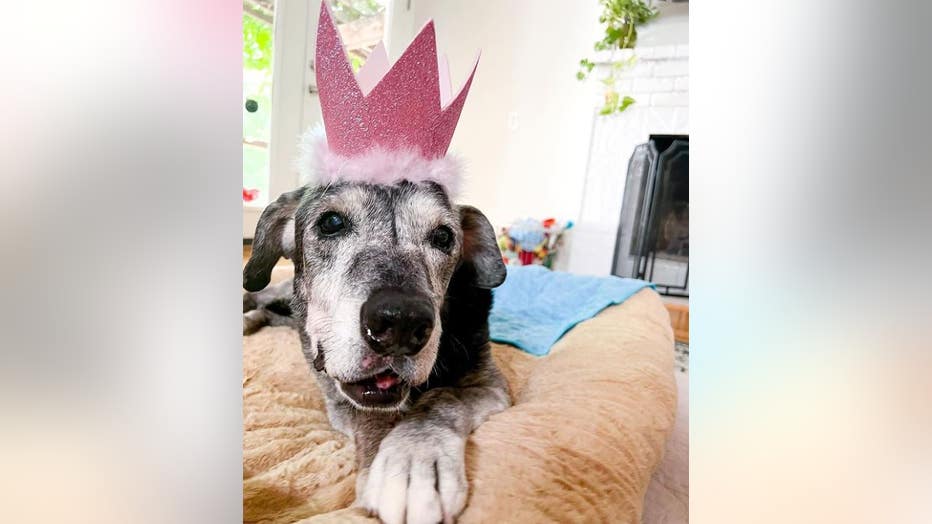 The pair even did a DNA test for Annie, which revealed she is 48% Labrador Retriever, 25% American Pit Bull Terrier, 12% Boxer, 7% Chow Chow, and 4% American Staffordshire Terrier.

Siler and Flores have also taken in another elderly, foster dog named Tippy — whose elderly owner passed away and the other moved into a senior care facility.

Tippy is pictured in a provided photo. (Credit: Lauren Siler)

"That left him with needing a soft spot to land. The Pawerful Rescue was contacted through social media and they reached out to us to ask if we would be willing to foster him alongside Annie," Siler explained. "So we decided to welcome him into the retirement home where dogs come to cross things off their bucket list."

Up next, Siler said they plan to have Annie and Tippy be "principals for a day at a local school" and be chefs for a day making homemade dog treats.

Senior dogs like Annie, Tippy end up at shelters ‘every day’

Siler said their biggest hope in sharing Annie and Tippy’s stories is that someone is inspired to foster a senior dog.

"Annie is not a unicorn. Dozens of dogs like her are at the shelter every day! Without people stepping up to foster, they will spend their last days in a kennel not surrounded by love and being spoiled rotten," she said.

Seamus the pitbull spent more than 2,000 days in a shelter in Fresno, California, before finding a forever home.

Siler noted how nonprofits like The PAWerful Rescue take in animals and have the financial responsibility to provide food, medical care, and more. Specifically, the Texas-based rescue aims to take in pets with extreme medical, behavioral, and other special needs as well as senior dogs.

The PAWerful Rescue founders recently purchased a piece of land in Texas and are currently fundraising to build an animal sanctuary with a kennel space, play areas, doggie pools, and more.

"My motto through this has been if you can’t adopt, foster. If you can’t foster, donate. If you can’t donate, volunteer," Siler added. "There is some way that anyone could be helping save other dogs like Annie."