HOUSTON - Just have fun, take a few hours to forget all about cancer, and make friends with families who understand what you're going through! That's the goal of the Sunshine Kids and their leading supporter, baseball Hall of Famer Craig Biggio.

We got to catch up with them at Minute Maid Park, during their annual family party to witness a unique game, made up of a special team of cancer fighters and their loving families.

"It's one of those days we look forward to every year, we had 100 kids come out here again," exclaims Craig Biggio.

Each family, doing their part to win the grand trophy of defeating childhood cancer.

Jamie Warfield's son, Conner, has been undergoing treatment for leukemia.

"It has been a tough battle. Initially, we were told that Conner had two months left to live, and he probably wouldn't survive the first round of chemo, but he is a fighter and he pulled through, and we're still fighting," Jamie states, as he chokes back tears.

Part of that battle is to remember the important things in life, like having fun. "There are no words to express it: this is a once-in-a-lifetime opportunity and I'm so blessed to be here," smiles Conner. "To be nominated as a Sunshine Kid, can't even begin to say what a blessing that is - they put a smile on sick kids faces and you can't put that into words," says Jamie. 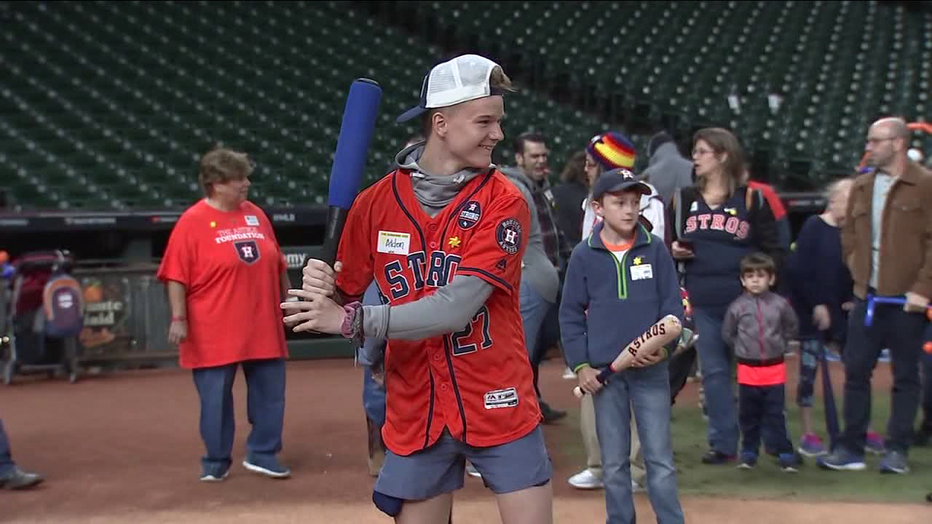 Every person here will be the first to tell you, cancer affects everyone in the family.

Little cancer fighter Colette's brother, Benjamin, is excited to be here!  "I hit it and ran as fast I could, I ran to first," says Benjamin.  His mother, Kristen House, loved witnessing that.

"Seeing him stand where his favorite player, Bregman does on 3rd base, and seeing his eyes light up and then her [sister Colette] to know that something she can be involved in with the whole family - that is huge, because kiddos that have cancer get a lot of things, as they should, but it's also the siblings and they can miss out.  The Sunshine Kids involves the whole family and that's vital and has been vital during her cancer journey," says Kristen. Colette got to bring a new pink bat for the occasion.

"I get to be on the field at the Astros' stadium," squeals a happy Colette.

Leukemia fighter Alden Duncan agrees that this event is a dream come true.

Baseball is the only thing on the mind of Leo Mosqueda, who is in remission of rare brain cancer.

"I feel so, so happy that I'm here," exclaims Leo.

"They're family - we're family. We've been doing this a long time and we've got some good stories, some tough ones, they're family and that's what it's all about," says Biggio.

He's been bringing sunshine into children's lives for more than thirty years!