A small plane crashed into Percy Priest Lake near Smyrna, Tennessee on the morning of May 29, leaving seven people dead.

"At this time, the Rutherford County Medical Examiner’s Office is working with immediate family members to help identify the victims," county officials said in a statement to FOX Television Stations Monday.

The church’s founder, Gwen Shamblin Lara, was among those aboard, as well as her husband, actor Joe Lara.

The names of others onboard include Jennifer J. Martin, David L. Martin, Jessica Walters, Jonathan Walters, and Brandon Hannah, all of Brentwood, Tenn.

A 1982 Cessna 501 that departed Smyrna Airport crashed at 10:52 Saturday morning. The flight was heading toward Palm Beach International, but it crashed into Percy Priest Lake shortly after takeoff, a spokesperson with the Rutherford County Government confirmed. 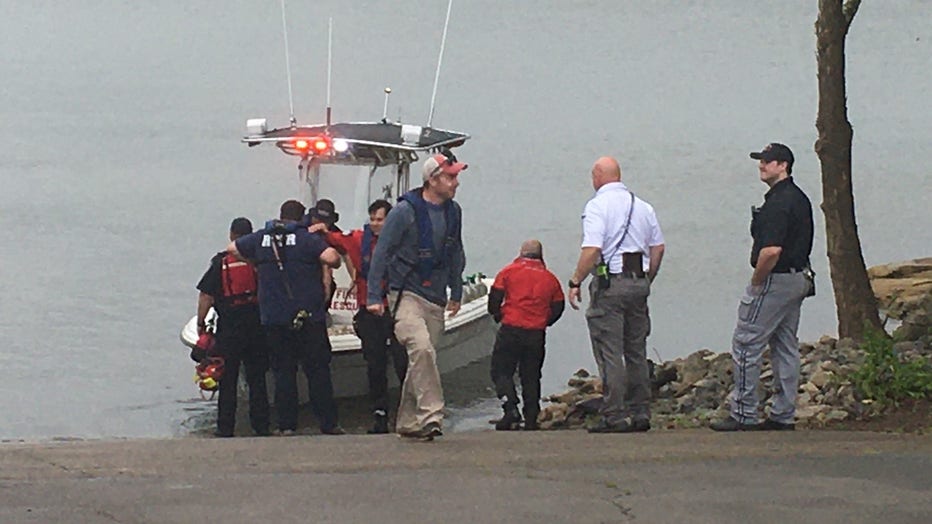 Authorities on the scene after a plane crashed into Percy Priest Lake in Smyrna, TN. (Credit: Rutherford County Government)

According to NewsChannel5, the aircraft is registered to JL&GL Productions LP, a partnership formed by the Laras. However, investigators haven’t yet confirmed the registration.

Gwen was known for founding the Weigh Down Workshop Bible studies. She combined her medical and nutritional background with her dedication to Christianity to found what eventually became the number one weight loss seminar in the world, according to her biography on Remnant Fellowship Church.

Her workshops were hosted at churches across the country and by the late 1990s were internationally known in most Protestant, Catholic, and Evangelical churches. Gwen Shamblin and The Weigh Down Workshop were featured on such shows as 20/20, Larry King Live, and The View, as well as in such magazines as Good Housekeeping and Woman's Day, according to her biography.

She later offered her principles in several published books and became a national best-selling author.

She also went on to found Remnant Fellowship Church in 1999, which now has more than 150 churches across the globe.

In 2018 she married actor Joe Lara, who is best known for playing Tarzan in the TV series "Tarzan: The Epic Adventures." He went on to act in almost 20 Tarzan films and other lead roles in films and TV shows through the early 2000s, according to his biography.

The couple, their children and grandchildren all live within a few houses of each other in Brentwood, Tenn. and describe themselves as a "close knit family" who get together practically every day, according to Gwen’s biography.

Between the two of them, they have three children and eight grandchildren.

"The Shamblins, Hannahs and Laras appreciate your concern, support and prayers. As has been reported by the media, some family members may have been involved in a plane accident this morning," Remnant Fellowship Church said Saturday in a statement to FOX Television Stations.

Officials from multiple local agencies, the National Transportation Safety Board, and the Federal Aviation Administration have worked tirelessly around the clock to continue recovery efforts at the site of a small jet crash at Percy Priest Lake that occurred Saturday morning.

Crews have pulled several components of the aircraft from the waters, along with human remains. At this time, the Rutherford County Medical Examiner’s Office is working with immediate family members to help identify the victims.

"On behalf of all agencies that have responded or contributed to this incident in any way, we extend our sincere condolences to the families and friends affected by this tragedy," said Rutherford County Fire Rescue Captain Joshua Sanders. "We are committed to working with our federal partners to do everything we can to bring closure to those impacted by this incident."

Some of the family members of the seven passengers on board and presumed to be deceased have issued statements:

"The seven Remnant Fellowship Leaders lost yesterday, including my husband and my mother, were some of the finest, most righteous and loving people I have ever known. I want the entire world to know that my mother, Gwen Shamblin Lara, was the kindest, most gentle, selfless, loving mother and best friend to me and my brother. Her actions and words changed thousands of lives for the better — and her message of "Loving GOD with ALL your heart" - will live on forever and ever - and continue to change lives for all eternity. My beloved husband, Brandon Hannah, took on this message of love for God first— and he truly was one of the most selfless and loving spouses and fathers on the planet. The whole world needs to know that for those who have lost hope - they will find hope and peace and love in the message poured out from Remnant Fellowship, and these amazing seven Leaders will go down in history as some of finest Christians anyone could ever meet."

— "Even one righteous man in this dark world is an astounding phenomenon. It impacts the world... it CHANGES the world..." — Gwen Lara’s words from her book "History of the One True God Volume 3"

"On behalf of my family and I, we want to thank all of the LAW ENFORCEMENT and FIRST RESPONDERS who helped with this horrible tragedy. My family is just asking for prayers at this time and we hope everyone who was affected, especially the children of the other passengers know that they are very loved and we hope to take special care of their needs in these coming years.

My mother was a special person and her memory will definitely remain for a very long time as she has a place in millions of peoples hearts around the world through her work with the Weigh Down Workshop.

Joe Lara was also such a wonderful husband to my mother and he will be missed.

Thanks again to all who have helped us and these families during this difficult time."

"Ashton Martin Jost and Diane McCord, on behalf of the family of David and Jennifer Martin, want to express their gratitude to the rescue personnel, police, investigators and Rutherford County authorities assisting with this tragic incident and the investigation, including hose they met with last night. They also want to thank everyone who has reached out with prayers and well wishes."