WASHINGTON - Ketanji Brown Jackson can now add "Supreme Court justice" to her title after the U.S. Senate voted to confirm the 51-year-old’s seat to the highest court in the country — making history as the first Black female.

Jackson, a 51-year-old appeals court judge with nine years of experience on the federal bench, was confirmed 53-47, mostly along party lines but with three Republican votes. Presiding was Vice President Kamala Harris, also the first Black woman to reach that high office.

Jackson will be just the third Black justice, after Thurgood Marshall and Clarence Thomas, and the sixth woman. She will join two other women, Sonia Sotomayor and Elena Kagan, on the liberal side of a 6-3 conservative court. With Justice Amy Coney Barrett sitting at the other end of the bench, four of the nine justices would be women for the first time in history.

President Joe Biden’s nominee is set to replace Justice Stephen Breyer when he retires this summer and will solidify the liberal wing of the 6-3 conservative-dominated court. Jackson joined Biden at the White House to watch the vote, embracing as it came in. 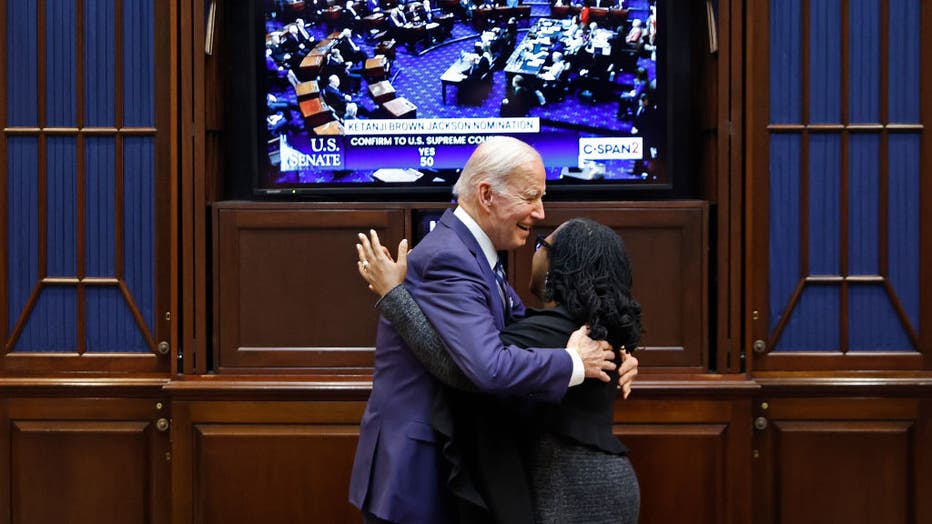 WASHINGTON, DC - APRIL 07: U.S. President Joe Biden embraces Ketanji Brown Jackson moments after the she got enough votes in the U.S. Senate to be confirmed as the first Black woman to be a justice on the Supreme Court in the Roosevelt Room at the Wh

Political insiders had expected Jackson to be confirmed despite headwinds from GOP leaders during her confirmation hearings. The Senate Judiciary Committee was deadlocked, 11-11, on whether to send the nomination to the full Senate floor.

However, three Republicans — Maine Sen. Susan Collins, Alaska Sen. Lisa Murkowski and Utah Sen. Mitt Romney — all said the same thing: they might not always agree with Jackson, but they found her to be enormously well-qualified for the job.

Romney said Jackson "more than meets the standard of excellence and integrity." Collins and Murkowski both decried the increasingly partisan confirmation process, which Collins called "broken" and Murkowski called "corrosive" and "more detached from reality by the year."

The federal judge endured hours of public scrutiny from skeptics, namely the Republican senators who erected a wall of opposition to her landmark nomination, the first in the court’s 233-year history.

From questioning Jackson’s view of books on critical race theory that drew her exasperated sigh — "They don’t come up in my work as a judge," she said — to the loaded suggestion that the sentences she imposed on child pornography defendants were too lenient, the questions from the Republicans tapped into long-standing American grievances over race, class and public safety.

Judge Ketanji Brown Jackson is telling senators she would defend the Constitution and decide cases "without fear or favor" if she is confirmed to the Supreme Court.

Senate Republican leader Mitch McConnell of Kentucky set the tone for most of his party when he said he "cannot and will not" support Jackson, citing GOP concerns raised in hearings about her sentencing record and her backing from liberal advocacy groups.

Republicans on the Judiciary panel continued their push to paint Jackson as soft on crime, defending their repeated questions about her sentencing on sex crimes.

"Questions are not attacks," said Marsha Blackburn of Tennessee, one of several GOP senators on the panel who hammered the point in the hearings two weeks ago.

Jackson pushed back on the GOP narrative, declaring that "nothing could be further from the truth" and explaining her reasoning in detail. Democrats said she was in line with other judges in her decisions. And on Monday they criticized their GOP counterparts’ questioning.

"You could try and create a straw man here, but it does not hold," said New Jersey Sen. Cory Booker.

The questioning was filled with "absurdities of disrespect," said Booker, who also is Black. He said he will "rejoice" when Jackson is confirmed.

Booker also cut through a tense day of hearings with a speech on racial progress that drew tears from the nominee and held the rapt attention of colleagues.

"You faced insults here that were shocking to me," Booker said, speaking directly to Jackson, who is nominated to become the first Black woman on the high court.

"Nobody’s taking this away from me," Booker continued, choking up as he spoke. Republicans are "gonna accuse you of this and that. But don’t worry, my sister. Don’t worry. God has got you. And how do I know that? Because you’re here, and I know what it’s taken for you to sit in that seat."

"You have earned this spot, you are worthy. You are a great American," Sen. Cory Booker said during an impassioned speech on Wednesday.

Jackson, who was sitting silently with her hands clasped, unlocked her fingers to grab a tissue and wiped tears streaming down her cheeks.

Judge Ketanji Brown Jackson was confirmed in 2021 to the D.C.-based appellate court as a U.S. Circuit Judge, a position Biden elevated her to from her previous job as a federal trial court judge. Three current justices — Thomas, Kavanaugh and John Roberts, the chief justice — previously served on the same appeals court.

Jackson was confirmed to the appeals court by a 53-44 vote in June 2021, winning the backing of three Republicans: Graham, Collins and Murkowski.

RELATED: Ketanji Brown Jackson to be nominated for Supreme Court

Jackson was born in Washington, D.C., but grew up in Miami. She has said that her parents, Johnny and Ellery Brown, chose her name to express their pride in her family’s African ancestry. They asked an aunt who was in the Peace Corps in Africa at the time to send a list of African girls’ names and they picked Ketanji Onyika, which they were told meant "lovely one."

She traces her interest in the law to when she was in preschool and her father was in law school and they would sit together at the dining room table, she with coloring books and he with law books. Her father became an attorney for the county school board and her mom was a high school principal. She has a brother who is nine years younger who served in the Army, including in Iraq, and is now a lawyer. 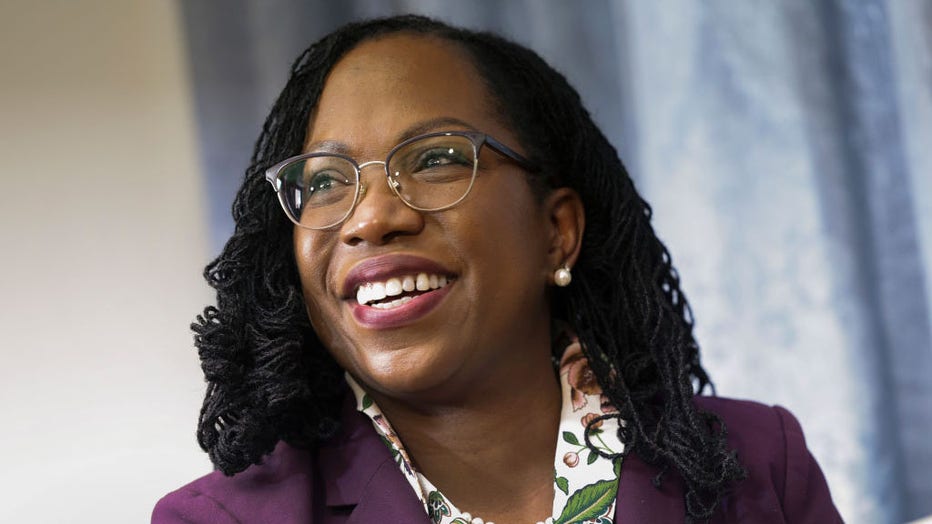 In high school, she was the president of her public high school class and a debate champion. Richard B. Rosenthal, a lawyer who has known her since junior high, said there was no question she would rise to the top of whatever field she chose, describing her as "destined for greatness." His older brother, Stephen F. Rosenthal, a classmate and friend from Miami who also went to college and law school with her, called her a "natural leader" and someone with "penetrating intelligence."

Jackson attended Harvard, where she studied government but also was involved in drama and musical theater and part of an improv group called On Thin Ice. At one point she was assigned actor Matt Damon as a drama class partner, she has said, acknowledging he probably wouldn’t remember her. He does not, Damon previously confirmed through a representative, but added: "That’s so cool!"

Also at Harvard, she met her husband, who is a surgeon at Georgetown University Hospital, and the couple has two daughters.

From 1999 to 2000, Jackson was a law clerk for Breyer on the Supreme Court. Deborah Pearlstein, a law clerk to Justice John Paul Stevens the same year Jackson worked for Breyer, recalled Jackson as funny, insightful and "incredibly good at her job."

"I don’t know anybody there at the time who didn’t get along with Ketanji," Pearlstein said.

Jackson has since worked for large law firms over the course of her career but also was a public defender. After she was nominated to serve on the U.S. Sentencing Commission, the agency that develops federal sentencing policy, she taught herself to knit to deal with the stress of the nomination and confirmation process, she has said.

As a commissioner, she was part of a unanimous vote to allow thousands of people already in federal prison for crack-related crimes get their sentences reduced as a result of a new law.

And Jackson’s work on the Sentencing Commission paved the way for her to become a federal trial court judge, where one of the things she displayed in her office was a copy of a famous, handwritten petition to the Supreme Court from a Florida prisoner, Clarence Gideon. The Supreme Court took his case and issued a landmark decision guaranteeing a lawyer for criminal defendants who are too poor to afford one.

Jackson had served as a federal trial court judge since 2013, nominated by former President Barack Obama.

Jackson is currently a member of the Judicial Conference Committee on Defender Services, as well as the Board of Overseers of Harvard University and the Council of the American Law Institute. She also currently serves on the board of Georgetown Day School and the United States Supreme Court Fellows Commission.

The Associated Press contributed. It was reported from Los Angeles and Cincinnati.