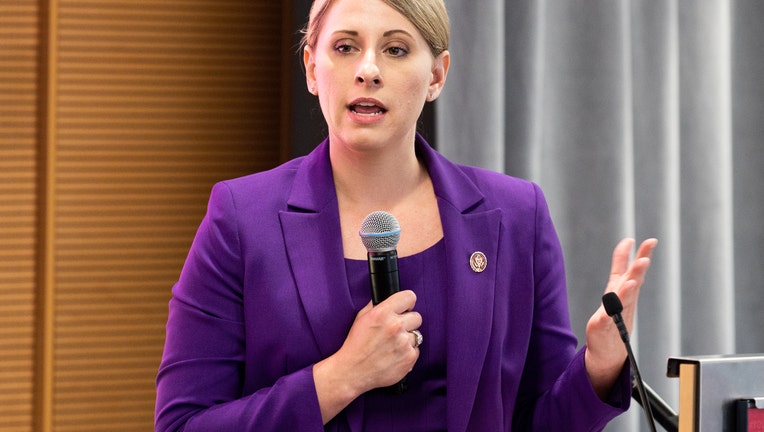 AGUA DULCE, Calif. (AP) — California U.S. Rep. Katie Hill has apologized to friends and supporters for engaging in an affair with a campaign staffer, but Susan Slates still feels let down by the 32-year-old Democrat who arrived in Congress just this year.

Slates is a beauty salon owner in Hill’s hometown of Agua Dulce, a lightly populated expanse of grassy hills and horse ranchettes north of Los Angeles. She tightens her lips when asked about Hill, who in addition to acknowledging the affair with the young female staffer now is under investigation by a congressional committee for an alleged intimate relationship with a male senior aide, which Hill denies.

“Disappointed,” Slates, a Democrat, said flatly. But she quickly jumped to Hill’s defense, saying anything she did pales in comparison to what’s she’s witnessed under President Donald Trump. “I still love her,” she added.

Just across the street at the local liquor store, the reaction was far different, highlighting the deep political divide that cuts through California’s 25th Congressional District, a long-standing Republican redoubt that has recently tilted Democratic.

Katie Hill, the US Representative-elect for California's 25th congressional district

“It’s a bad role model for the children,” said owner Danny Hawara, a registered independent who says he’s a strong gun rights supporter who leans right on politics. He has a message for members of Congress who don’t uphold the standards of conduct voters expect: “Leave office,” he said.

Compromising photos of Hill and purported text messages from her to the campaign staffer, a recent college graduate when she joined Hill’s campaign, surfaced online this week in a right-wing publication and a British tabloid. Among the photos, Hill is seen embracing and kissing the woman.

The scandal enveloping Hill comes at a time when there seem to be few hard rules about conduct and consequence for public officials. With the 2020 elections approaching, voters in her district will be asked to wrestle with basic questions about who was wronged, did it matter and whether any punishment is warranted.

Claremont McKenna College political scientist Jack Pitney said it’s “not a good situation for her, to put it mildly.” But added: “Perhaps the public will just shrug.”

The risk for her, he said, is if the ethics panel finds any improper conduct with her legislative director. House rules prohibit members of Congress from engaging in sexual relationships with staff members.

“A story like this, by itself, is not necessarily fatal,” Pitney added. “To anybody who thinks this is an automatic political death sentence, I have three words: President Donald Trump.”

Hill, a first-term House member who identifies as bisexual, has been celebrated as the face of millennial change and is close to Speaker Nancy Pelosi, a fellow California Democrat. Hill claims she is the target of a political smear campaign. She’s asked U.S. Capitol Police to investigate potential legal violations for posting and distributing the photos online without her consent.

“This coordinated effort to try to destroy me and the people close to me is despicable,” she said in a statement issued just after the scandal broke.

Hill also is contending with a contentious divorce from a husband she calls abusive and blames for circulating the photographs that appeared online. While not providing any evidence of abuse by Kenneth Heslep, Hill says she turned elsewhere for companionship because of their turbulent relationship and lamented that “the deeply personal matter of my divorce has been brought into public view.”

In court papers, Heslep sketches a different story, one in which he was rejected by an ambitious wife after agreeing to her request that he play the role of house-husband, while she pursued her career aspirations. He said she left him soon after being elected to Congress.

“Our agreement was that I would stay at home and take care of all the domestic duties and responsibilities while (Hill) worked,” Heslep said in documents filed in July in Los Angeles Superior Court. He did not allege any extramarital affairs by his wife.

In a swing district with a GOP pedigree, she highlighted her centrist beliefs and promised to end politics as usual. She’s a gun owner and her Republican father is a police officer who had never voted for a Democrat before her 2018 primary. Her mother, a Democrat, is a nurse. Her election was followed by a rapid ascent in national Democratic politics — she is vice chair of the powerful Oversight Committee that oversees the executive branch and a freshman liaison to Democratic leaders.

The March primary will test Hill’s strength against several rivals lined up to challenge her. One Republican hopeful, Mike Garcia, a former Navy fighter pilot, has called the disclosures and allegations about Hill’s personal life disturbing.

In a sign of what’s to come in the campaign, the Republican Party of Los Angeles County headlined a statement Friday, “Katie Hill is an embarrassment!!” The party asked for donations to turn LA County red and “start with Katie Hill.”

Voters, not surprisingly in a country of deep political divisions, appear split.

At the salon in Agua Dulce, retired educator Peg Spry, a Democrat and Hill volunteer in 2018, blamed right-wing political interests for engineering the story.

“We all knew she was bisexual, so what is the difference?” she asked.

But outside a library in nearby Acton, independent Larry Weier, an Agua Dulce retiree, said the scandal has confirmed his judgment on Hill.