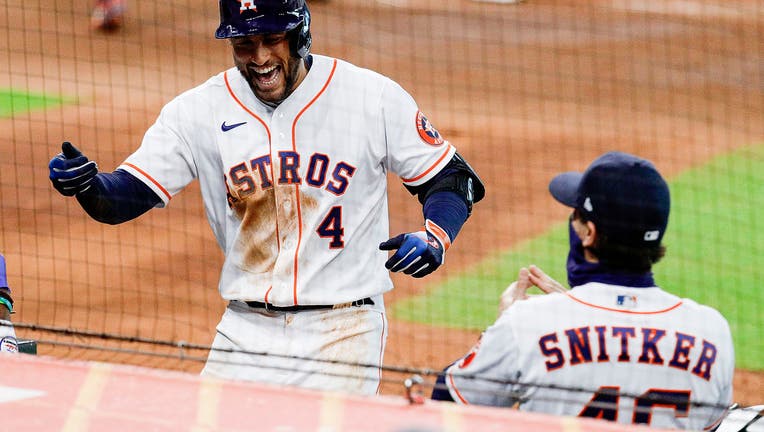 HOUSTON, TEXAS - AUGUST 29: George Springer #4 of the Houston Astros celebrates hitting a two run home run against the Oakland Athletics in the second inning during game two of a doubleheader at Minute Maid Park on August 29, 2020 in Houston, Texas.

HOUSTON - George Springer’s time with the Houston Astros has come to an end.

The MVP of the Astros’ 2017 World Series championship has reportedly agreed to a six-year, $150 million deal with the Toronto Blue Jays.

Springer, 31, has spent his entire seven-year career in Houston, where he was a three-time All-Star and won two Silver Slugger awards.

A fan favorite, Springer is tied for fourth all-time in MLB history with 19 career postseason home runs.
He clubbed five of those round-trippers in the 2017 World Series when Houston won its only world title, beating the Los Angeles Dodgers in seven games. Springer hit .379 in that Fall Classic, with 7 RBI and 8 extra-base hits.

Springer turned down the Astros’ one-year, $18.9 million qualifying offer earlier this offseason. As a result of his departure, Houston will receive a compensatory draft pick.