NASA will once again attempt to launch the Artemis moon rocket at 1:04AM ET. FOX 35 Orlando's Nestor Mato spoke live with LiveNOW from FOX's Rain Augustine about what to expect.

CAPE CANAVERAL, Fla. - When NASA’s giant new moon rocket soars into space, the roar of its rockets will be the last gasp for some pieces of space shuttle program history. The Artemis I mission’s rocket engines and boosters have direct ties to each of the shuttles and even one of the original Mercury 7 astronauts.

The Space Launch System, as it is formally called, is scheduled to blast an uncrewed Orion capsule toward the moon as soon as Wednesday. Thousands of people are expected to line Florida’s Space Coast to watch the first flight of a new moon rocket – the first since the massive Saturn V debuted on a similar test flight in 1967. 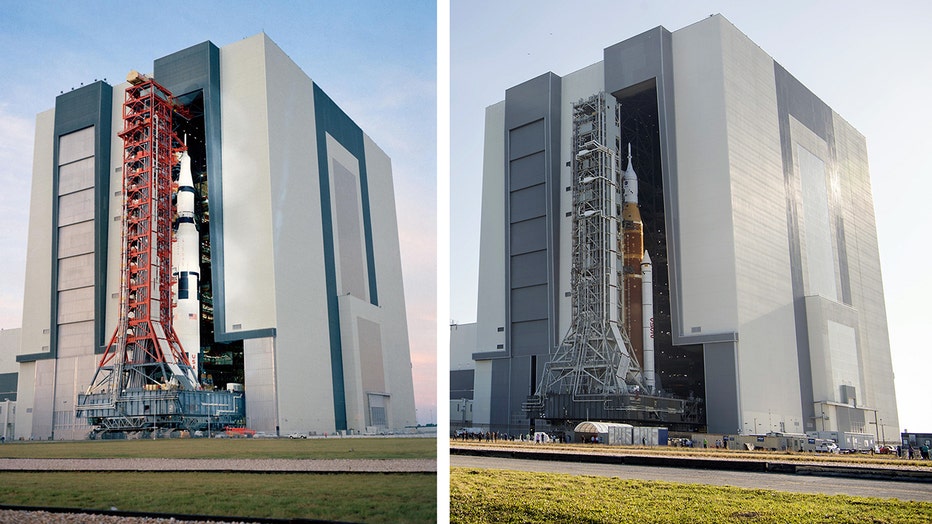 On the left, the Saturn V rocket for the Apollo 14 mission rolls out to the pad in 1970. On the right, the crawler-transporter is seen carrying the Artemis I rocket in 2022. (NASA / Aubrey Gemignani)

In sheer scale, the SLS rocket nearly lives up to the Saturn V legacy. This "Block 1" initial SLS version clocks in at 322 feet high – taller than the Statue of Liberty but not as tall as the 363-foot Saturn V. Later versions of the SLS could cap out at 365 feet, though, eclipsing the famed moon rocket.

Where the SLS does top the Saturn V is launch thrust. With the help of two upgraded solid rocket boosters, the SLS will be 15% more powerful than the Saturn V, generating 8.8 million pounds of thrust at launch. 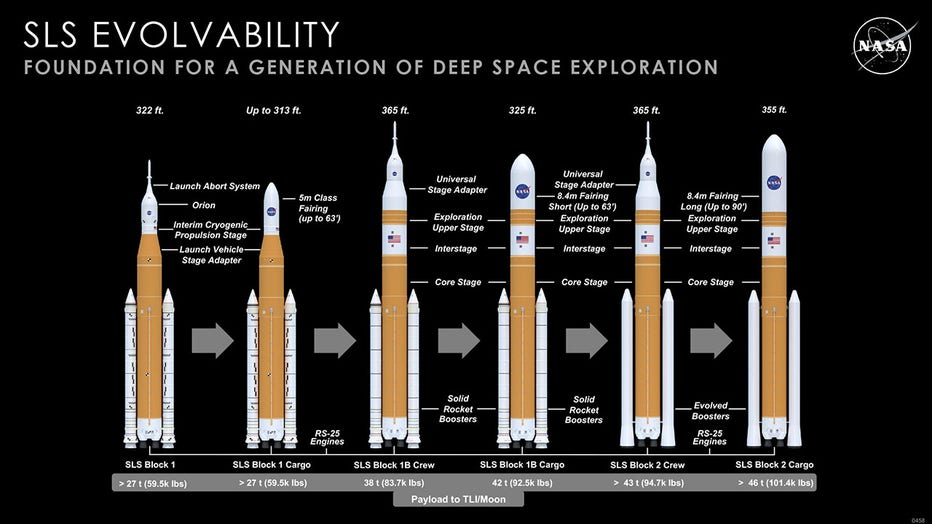 That will make it the most powerful rocket ever to successfully fly. The Soviets’ secret moon rocket, the N1, was equipped with 30 first-stage rocket engines capable of over 10-million pounds of thrust, but all four test launches failed; the longest flight did not last two minutes.

RELATED: Artemis I’s LEGO astronauts: On a mission to inspire 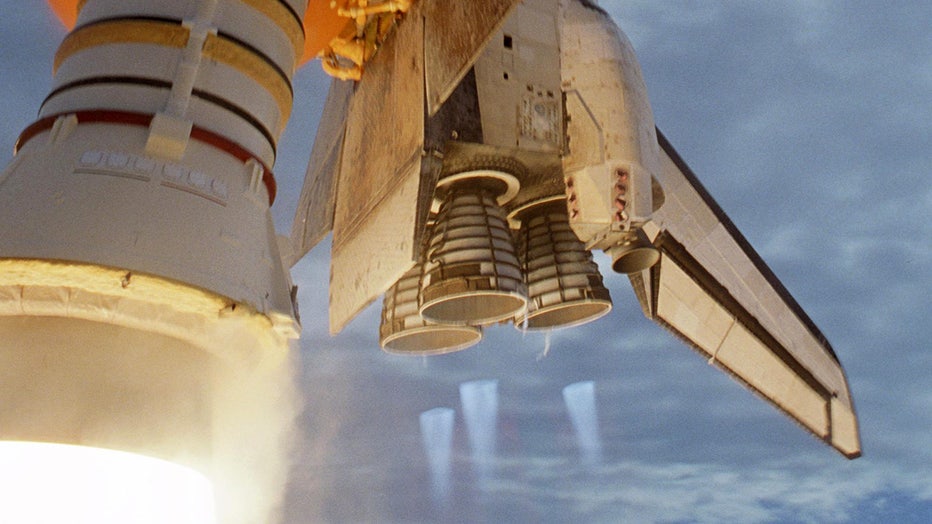 Each space shuttle was equipped with three RS-25 main engines, guzzling liquid oxygen and hydrogen from the orange external tank as they powered the reusable orbiter to space. Those engines were swapped out and refurbished after landing.

Over three decades of the shuttle program, 46 engines were produced. Of those, NASA saved 16 for use as the main engines on what became the SLS rockets; 24 more will be manufactured for future flights. 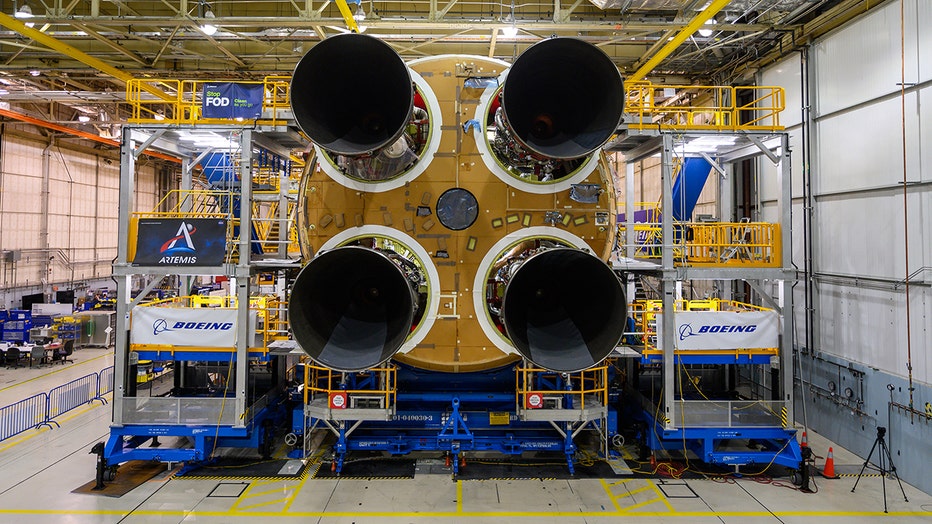 For the Artemis I mission, four veteran engines were selected, with a combined 25 flights between them, according to NASA:

Unlike the shuttle program, though, the SLS rockets won’t be reused. The core stage and its engines will instead be dropped in the Atlantic when its fuel is gone – Apollo-style – which means these four old shuttle engines will go out in a literal blaze of glory. 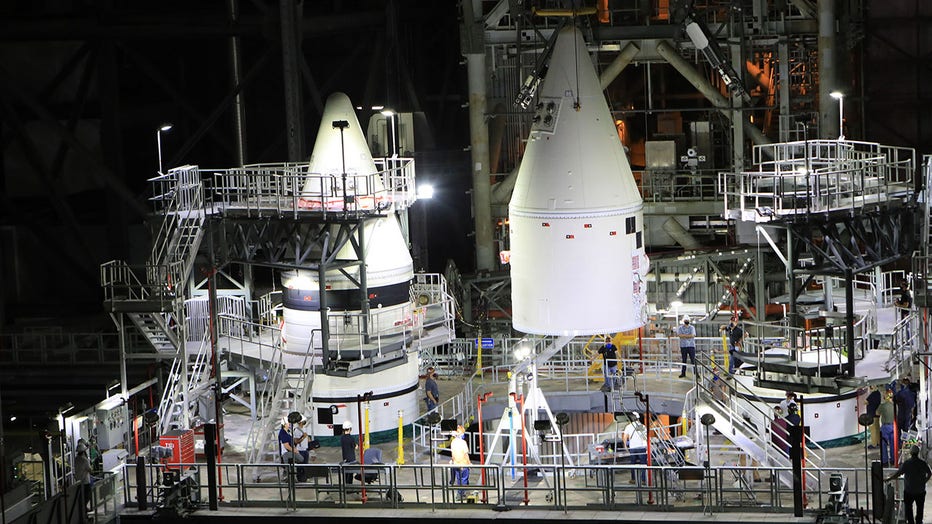 Technicians place the forward nose assemblies on top of the SLS SRBs in March of 2021. (NASA photo)

But those aren’t the only pieces of shuttle legacy aboard. Many segments of the reusable solid rocket boosters were also migrated to SLS from the space shuttle program, and some of the Artemis I booster segments date back to the mid-1980s.

In fact, NASA data shows each of the white nose cone segments atop the Artemis I boosters flew on over 10 shuttle missions as far back as STS-41G, a 1984 flight of space shuttle Challenger that carried Sally Ride and Kathryn Sullivan – the first spaceflight of two American women. 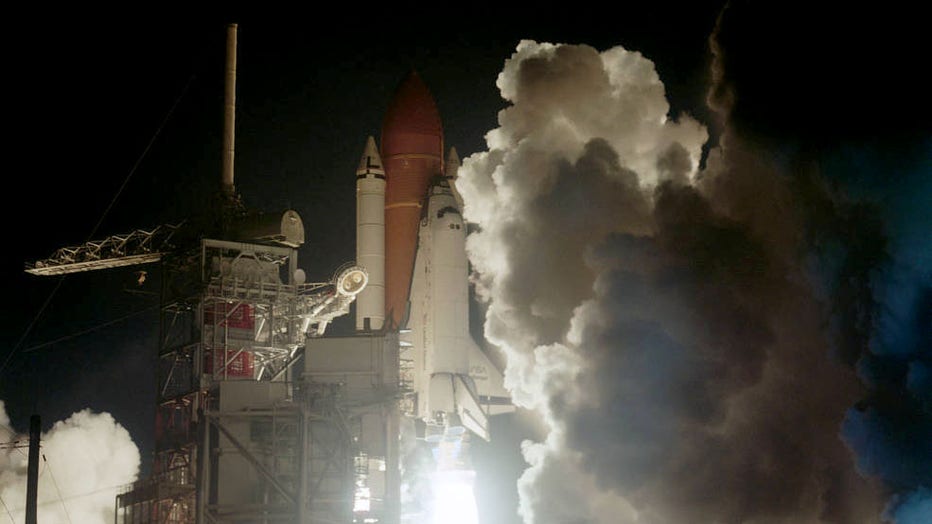 The Oct. 5, 1984 launch of space shuttle Challenger's STS-41G mission. Parts of the solid rocket boosters from that flight are among those being reused in the Artemis I boosters. (NASA photo)

The first launch window for the Artemis I mission opens just after 8:30 a.m. ET Monday. If it’s delayed for any reason, the agency plans to try again Friday and the following Monday.

The mission is scheduled to last up to 42 days, featuring an uncrewed flight around the moon by the Orion capsule, which made its debut in a successful 2014 test flight atop a Delta IV Heavy rocket.

Artemis I is designed to test not only the rocket, but the spacecraft’s ability to launch into space, enter into lunar orbit, return, and splash down safely after re-entering the atmosphere at nearly 25,000 mph. The capsule is loaded with sensors, in addition to a variety of interesting pieces of artifacts and other cargo.

RELATED: Snoopy returning to space as ‘zero-G indicator’ on Artemis I flight 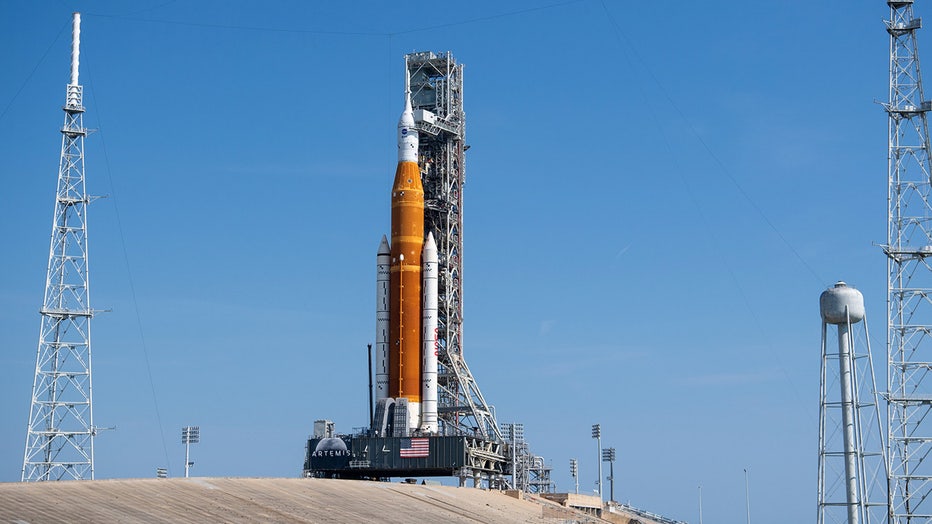 NASA’s Space Launch System (SLS) rocket with the Orion spacecraft aboard is seen atop a mobile launcher at Launch Pad 39B, Thursday, Aug. 18, 2022, after being rolled out to the launch pad at NASA’s Kennedy Space Center in Florida. (NASA/Joel Kowsky)

Assuming the Artemis I mission flies successfully, the Artemis II mission – a similar flight plan, but with four people aboard – could happen within two years.

The goal of the Artemis program is to return humans to the moon, including the first woman and first person of color. Artemis III, the first moon landing mission, will be no earlier than 2025.

RELATED: What are all those black and white dots on NASA's Artemis I SLS rocket?

Editor’s note: A previous version of this story was published in conjunction with the Artemis I rollout. This version has been updated to reflect additional background and the imminent launch attempt.