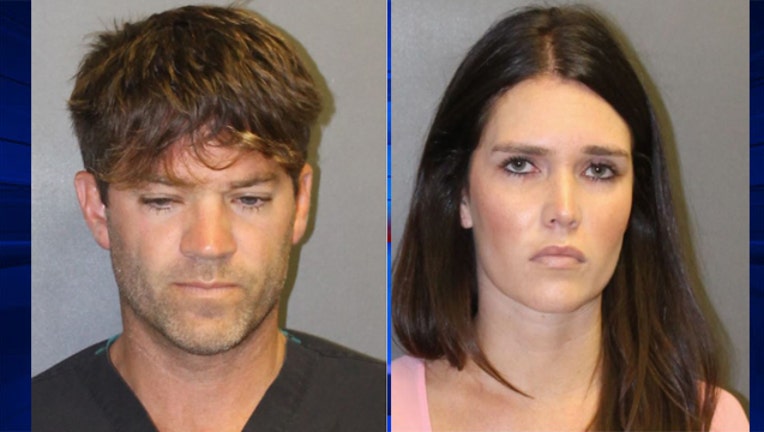 LOS ANGELES (AP) - A California physician who appeared in a reality TV dating show and an alleged female accomplice have been charged with drugging and sexually assaulting two women, and authorities said Tuesday there could be many more victims.

Orthopedic surgeon Grant W. Robicheaux, 38, of Newport Beach and Cerissa Laura Riley, 31, of Brea were arrested Sept. 12 after being charged with rape by use of drugs, oral copulation by anesthesia or controlled substance, and other crimes, Orange County District Attorney Tony Rackauckas told a news conference in Santa Ana.

Investigators were meticulously going through “thousands and thousands of videos and images on Robicheaux’s phone, many also including Riley,” Rackauckas said.

Some videos show women who “appear to be highly intoxicated beyond the ability to consent or resist, and they’re barely responsive to the defendant’s sexual advances. Based on this evidence, we believe that there might be many unidentified victims out there,” he said.

The district attorney showed reporters video of Robicheaux from a now-canceled Bravo TV show called “Online Dating Rituals of the American Male” in an episode titled “Three’s A Crowd.”

“We believe the defendants used their good looks and charm to lower the inhibitions of their potential prey,” Rackauckas said, releasing an array of information about many locations and events associated with Robicheaux and Riley.

The defendants, who were released on $100,000 bail, could not be immediately reached for comment.

The two women who were allegedly assaulted met the pair during social encounters.

“Women who have encountered these two might have felt a false sense of security due to the fact that both defendants are clean cut, good-looking,” Rackauckas said.

“We tend to trust doctors who take an oath to do no harm. The second defendant, being a female, is key. A woman purporting to be his girlfriend clearly played a significant role in disarming the victims, making them feel comfortable and safe,” he said.

According to prosecutors, Robicheaux and Riley met a 32-year-old woman at a Newport Beach restaurant on April 10, 2016, invited her to a party and then escorted her to Robicheaux’s apartment when she was intoxicated.

The pair allegedly gave the victim multiple drugs and then sexually assaulted her while she was incapable of resisting. The woman called police the next day, and a forensic exam found multiple controlled substances.

On Oct. 2, 2016, the defendants allegedly drank alcohol with another woman at a Newport Beach bar until she was unconscious, brought her to Robicheaux’s apartment and sexually assaulted her. The district attorney’s office said the victim awakened and screamed for help until a neighbor called police, who began an investigation.

Other charges against the two allege large amounts of illegal drugs were found in Robicheaux’s residence in January 2018. Robicheaux is also accused of possessing two illegal, unregistered assault rifles, four other firearms and several large-capacity magazines.

The district attorney said events and places the pair may have traveled to since 2015 include the Burning Man festival in Nevada, the Dirtybird Campout festival in Silverado, California, the Splash House festival in Palm Springs, and landmarks near Page, Arizona.

Robicheaux was an undergraduate at Louisiana State University and then graduated from its medical school in 2007, Rackauckas said. He then did postgraduate work at New York University Hospital for Joint Diseases in New York City and did an orthopedic surgery residency at University of California Irvine Medical Center in Orange, California. He was licensed to practice medicine in California on May 30, 2009.

A message left at Robicheaux’s office wasn’t immediately returned Tuesday, and a home number listed for him did not have a voicemail. Riley’s number was unlisted, and she was otherwise unable to be reached.

The Bravo reality show aired for one season, is no longer in production and there are no plans to bring it back, a spokeswoman for NBC Universal said in an email.