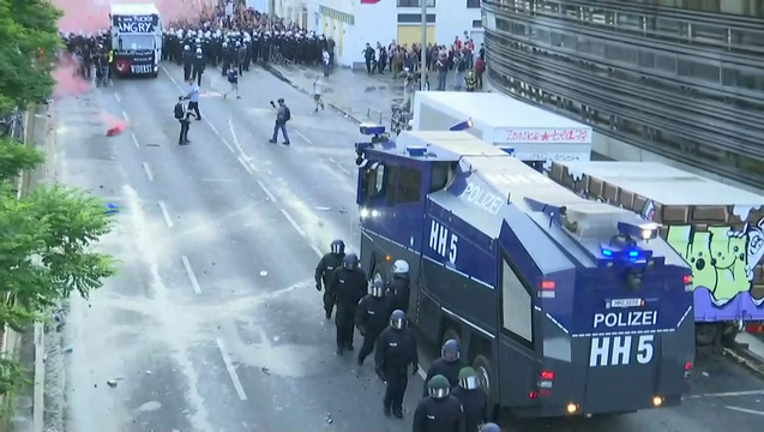 HAMBURG, Germany (AP) -- German police clashed with violent protesters Thursday in Hamburg a day ahead of the Group of 20 summit, using water cannons, pepper spray and batons to disperse marchers after some attacked them with bottles and other objects.

The skirmishes came hours before the two-day gathering of the world's top economic powers gets under way Friday morning in Germany's second-biggest city.

Its host, German Chancellor Angela Merkel, said she hoped the leaders would be able to find "compromises and answers" on a wide range of issues -- although the prospects of finding common ground on climate change and trade were uncertain.

Thursday evening's protest as the G-20 leaders arrived in Hamburg was titled "G-20: Welcome to Hell," and a standoff between hardcore anti-capitalist protesters and police developed before the march itself really got going.

Police said they repeatedly asked some demonstrators to remove their masks, to no avail. They then decided to separate the group from the rest of the march, which they estimated at 12,000 people in total.

Black-hooded protesters attacked a police vehicle with bottles and bricks, breaking its window.

Organizers quickly called an end to the march after the violence broke out, police said. Skirmishes continued, with police advancing down the street with two water cannons while being pelted with bottles by a group of black-clad people.

A nearby building was plastered with the slogan "Borderless solidarity instead of nationalism: attack the G-20." A small group on the roof set off fireworks. Police said windows at a furniture store and a bank were damaged. There was no immediate word on a number of arrests or injuries.

Many other groups are calling for peaceful protests and are pushing the G-20 leaders for action to fight climate change and address economic disparities in the world. Some are even calling for the dissolution of the G-20 itself so the United Nations becomes the platform for such discussions.

In all, more than 100,000 protesters are expected in Hamburg for the summit, with some 8,000 considered part of Europe's violent left-wing scene, according to police.

The northern port city has boosted its police with reinforcements from around the country and has 20,000 officers on hand to patrol Hamburg's streets, skies and waterways.

Merkel is also hoping to keep things under control inside the city congress center where the summit is being held. With guests including U.S. President Donald Trump, Russian President Vladimir Putin and Turkish President Recep Tayyip Erdogan, the search for compromises is expected to be challenging.

Merkel said leaders would address regulating financial markets, fighting terrorism and pandemics and combatting climate change, among other issues. She said "free, rule-based and fair trade" will be an important issue.

"You can imagine that there will be discussions that will not be easy," she said. "Globalization can be a win-win situation. It must not always be that there are winners and losers."

In the wake of Trump's recent decision to pull out of the Paris deal fighting climate change, the battle against global warming promises to feature prominently in discussions at the summit.

Merkel has rejected calls from some to push for a strong "G-19" statement -- without the U.S. -- on climate change. That is something that Zhu Guangyao, a Chinese deputy finance minister, told reporters Thursday that Beijing also did not support.

"The policies produced by the G-20 should be by the consensus of all member states," he said. "No one should be excluded."