HOUSTON - Police are searching for two suspects they say robbed a man as he arrived at a Houston home after leaving a jewelry store.

Police say the man had ordered a rideshare vehicle from the jewelry store on Richmond Avenue to the home on Cohn.

He told police that as he exited the vehicle he noticed a black Dodge Charger pull up near the driveway and saw the front two occupants putting masks over their heads.

He reported that he then tried to run into the house but was stopped by the suspects. One was reportedly armed with an assault rifle and the other was armed with a handgun.

Police say the suspect with the assault rifle struck the man in the head multiple times, causing him to fall to the ground in the garage.

The suspects then took a bag that the man was holding, along with the jewelry that he was wearing, according to police.

The suspects ran back to the Dodge Charger and fled the scene.

Police shared videos of the suspects which were captured on doorbell camera and a witness’s cell phone.

One suspect is described as a black male, around 5'8" to 6’ tall, and 170 to 200 pounds.  Police say he wore a white, blue, and red jacket (possibly Tommy Hilfiger), a mask, light blue skinny jeans, basketball type shoes, a rose/gold colored watch on his left hand, gloves, and used a black AR-15 rifle. 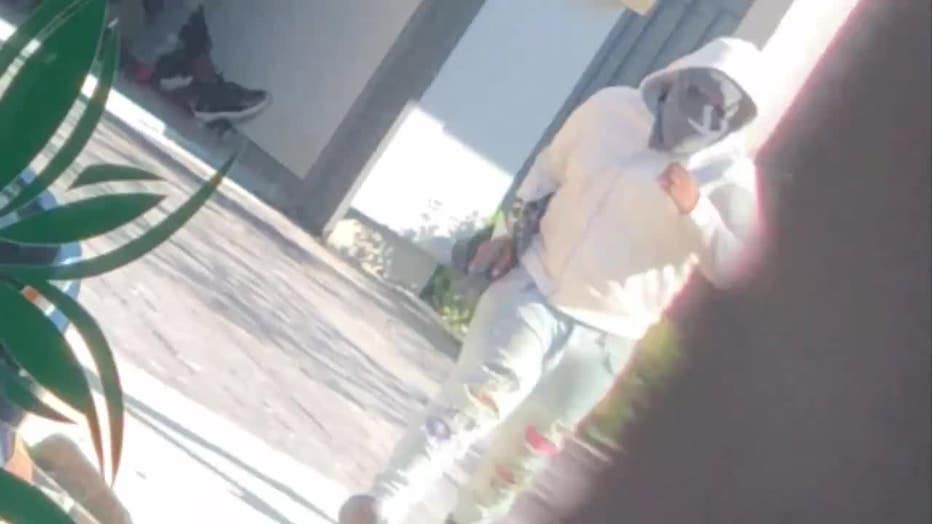 The second suspect is described as a black male, 5’6" to 5’8" tall and 200 to 230 pounds. Police say he wore a white zip up hoodie, torn blue jeans, black croc sandals, a black face mask and no gloves.