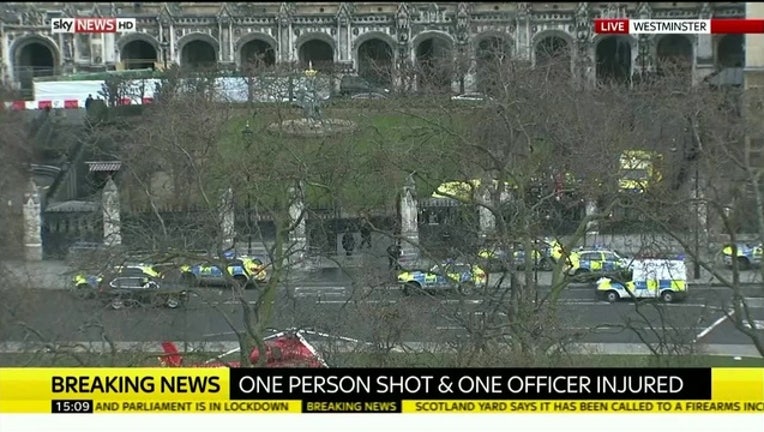 LONDON (AP) - An attacker stabbed a police officer and was shot by police on the grounds outside Britain's Parliament, sending the compound into lockdown Wednesday. Around the same time, a vehicle mowed down pedestrians on nearby Westminster Bridge. Authorities said they were treating the attack as a "terrorist incident until we know otherwise."

It was not clear how many people were injured or whether more than one attacker was involved. There was no immediate claim of responsibility.

The threat level for international terrorism in the UK was listed at severe. Wednesday was the anniversary of suicide bombings in the Brussels airport and subway that killed 32 people.

The incident in London unfolded within sight of some of the city's most famous tourist sites, including the London Eye, a large Ferris wheel with pods that have views over the capital. It stopped rotating and footage showed the pods full as viewers watched police and medical crews on the bridge, which has Big Ben at its north end.

Labour Party lawmaker Mary Creagh said it was her understanding that between five and seven people were mowed down on the bridge. Rick Longley told the Press Association that he heard a bang and saw a car mow down pedestrians and come to a crashing stop. Images from the scene showed pedestrians sprawled on the ground, with blood streaming from a woman surrounded by a scattering of postcards.

"They were just laying there and then the whole crowd just surged around the corner by the gates just opposite Big Ben," he said. "A guy came past my right shoulder with a big knife and just started plunging it into the policeman. I have never seen anything like that. I just can't believe what I just saw."

Dennis Burns, who was just entering Parliament for a meeting, told the Press Association he heard a radio message saying an officer had been stabbed. Police and security rushed outside as he was going in.

"When I got inside I was wondering what the hell was going on and I saw dozens of panicked people running down the street," he said. "The first stream was around 30 people and the second stream was 70 people. It looked like they were running for their lives."

Daily Mail journalist Quentin Letts said he saw a man in black attack a police officer outside Parliament before being shot two or three times as he tried to storm into the House of Commons.

Lett said the other officer ran to get help and the man in black ran toward the entrance.

"As this attacker was running towards the entrance two plain-clothed guys with guns shouted at him what sounded like a warning, he ignored it and they shot two or three times and he fell," he said.

As lawmakers were voting inside Parliament, they reported hearing the sound of gunshots.

Journalists there said they were told to stay in their offices. Press Association news agency reported that two people were seen lying within the grounds of Parliament.

Prime Minister Theresa May was at Parliament when the incident began, but her office says she is safe.

Paisley Dodds in London and Lori Hinnant in Paris contributed.