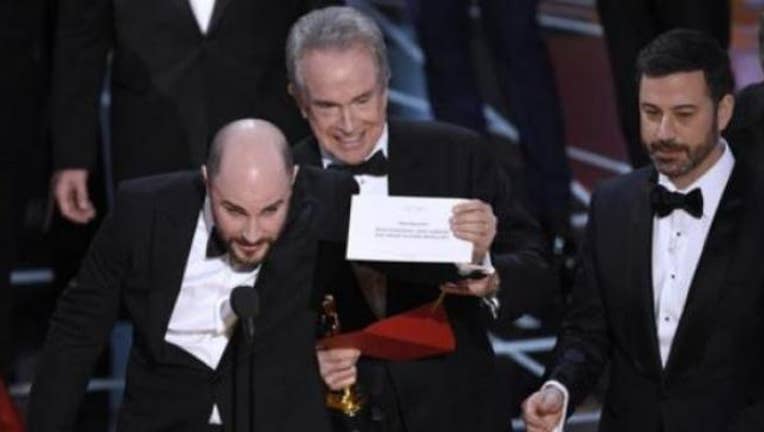 LOS ANGELES (AP) - The 89th Academy Awards got off on the right foot, with a song and dance, but ended with the most stunning mistake ever to befall the esteemed awards show when the best picture Oscar was presented to the wrong movie. Faye Dunaway and Warren Beatty, holding an incorrect envelope, wrongly presented the top prize to "La La Land," instead of "Moonlight."

The moment at the conclusion of the Sunday night show was so jaw-dropping, it eclipsed everything else in a ceremony that was packed to the brim with Donald Trump jabs, fun stunts, heartfelt positivity and a stunning upset by "Moonlight" over what had been a "La La" juggernaut throughout award season. Yet somehow, even the embarrassing moment pivoted into grace.

As confusion and bafflement overwhelmed those in the Dolby Theatre and at home on their couches, "Moonlight" director Barry Jenkins and "La La Land" director Damien Chazelle shared a hug on the back of the stage, out of sight from the television cameras.

"The folks of 'La La Land' were so gracious. I can't imagine being in their position and having to do that," Jenkins told reporters backstage. "It was unfortunate that things happened as they did but, goddamn, we won best picture."

Oscar tabulators PwC, in their 83rd year providing the service to the academy, later apologized to all in a statement and are investigating why it happened.

There's no denying, though, that "Moonlight's" win over "La La Land" was a massive upset, made only more pointed by the envelope gaffe. Chazelle's candy-colored musical was widely presumed to be a shoo-in for the top prize after its record-tying 14 nominations and a relative sweep of award season. The film still won six Oscars, including best director for Chazelle, who at 32 became the youngest ever to take the prize, and for score, song ("City of Stars") and actress to Emma Stone.

The actress, who pledged her deep love of "Moonlight," said later, "Is that the craziest Oscar moment of all time? Cool!"

The academy usually throws awards at films that gaze lovingly at Hollywood, but Barry Jenkins' heartfelt coming-of-age drama seduced academy voters in the end - a subtle tide change perhaps informed by both a prickly political climate and an urgent imperative to honor more diverse films after two consecutive years of OscarsSoWhite.

Diversity could be found in every corner of the awards this year, with supporting acting wins for "Moonlight's" Mahershala Ali and "Fences'" Viola Davis, although the best actor category proved to be a bit of an upset when Casey Affleck won for "Manchester by the Sea" over Denzel Washington of "Fences," who had picked up momentum in recent weeks.

The improvement followed efforts by Academy of Motions Pictures Arts and Sciences President Cheryl Boone Isaacs to diversify the membership of the largely white, older and male film academy. "Tonight is proof that art has no borders, no single language and does not belong to a single faith," said Isaacs.

Davis gave a particularly powerful speech in which she praised the late "Fences" playwright August Wilson who, she said, "Exhumed and exalted the ordinary people." Kimmel said later that Davis, "Just got nominated for an Emmy for that speech."

Ezra Edelman, whose nearly eight hour epic "O.J.: Made in America" took best documentary, dedicated the award to the victims of the famous crime, Nicole Brown Simpson and Ronald Goldman.

Rich Moore, one of the three directors of Disney's best animated film winner "Zootopia," described the movie as about "tolerance being more powerful than fear of the other."

The majority of speeches were moving and personal and generally in praise of art's ability to create empathy in the world, including Jenkins' in his win for adapted screenplay, who said, "All you people out there who feel like there isn't a mirror out there for you, the Academy has your back, the ACLU has your back, and for the next four years we will not leave you alone, we will not forget you." But not one speech came close to Meryl Streep's Golden Globes barnburner.

"Personally, I didn't say anything because my head was completely blank," Affleck said backstage of his not political speech.

Instead, politics stayed largely with host Jimmy Kimmel, who kept his barbs coy and irreverent, stating at the start that he wasn't the man to unite the country.

The host peppered the evening with digs at President Trump, at one point asking the crowd to stand for the "overrated Meryl Streep," and, later, for any news outlet with the word "Times" in its name to leave, saying "we have no tolerance for fake news."

Kimmel even jokingly thanked the president for shifting the focus of the night.

"Remember last year when it seemed like the Oscars were racist?" he said in the opening.

The evening's most blunt protests against Trump came not from the A-list stars but from foreigners, a few of whom were not even in attendance and could communicate their sentiments only through statements.

Kimmel, as if predicting that this would be the case, said early that the Oscars are watched by 225 countries "that now hate us."

Iranian director Asghar Farhadi, whose "The Salesman" won best foreign film, his second win in the category, did not attend the ceremony in protest of Trump's travel ban to seven predominantly Muslim nations.

Anousheh Ansari, an Iranian astronaut, read a statement from Farhadi.

"I'm sorry I'm not with you tonight," it read. "My absence is out of respect for the people of my country and those of other six nations who have been disrespected by the inhumane law that bans entry of immigrants to the U.S."

Gael Garcia Bernal, the Mexican actor, while presenting an award also declared: "As a migrant worker, as a Mexican, and as a human being, I am against any wall."

But, of course, the big best picture mistake will be the thing that history remembers abou the 89th Academy Awards.

"Let's remember this is just an awards show," Kimmel said at the close. "I knew I would screw this show up, I really did. I promise I'll never come back."