A young girl surprises her family with a spunky gymnastic routine after watching the Olympics.

The 2020 Tokyo Olympics are inspiring future Olympians around the country, especially little gymnasts.

A 1-year-old girl wowed her mom with a gymnastics routine while watching Team USA gymnastics compete in the women’s artistic final.

She completed forward rolls around the living room while the Olympic gymnastics competition played in the background.

The little girl’s mom, Jessica, told Storyful that her daughter "loves watching the Olympics" and her favorite sport to watch is gymnastics.

A young girl in Rhode Island was inspired by the Olympics, too. In a video posted on Instagram, the little girl, dressed in a princess dress, put on a gymnastics floor routine in her living room.

Inspired by the Olympics, a little girl in a princess dress put on a gymnastics floor routine in her living room.

She jumps around the floor, mirroring walking on a beam before forward rolling and sticking the landing.

The video posted by @MetsHomeRunGuy was captioned "Floor routine on point. Future Olympian."

On July 27, Team USA competed in the artistic Olympic final. The US team took home a silver medal after falling one point short of the gold medal-winning Russian Olympic Committee team.

Olympic medalist Simone Biles withdrew from the final on Tuesday after having a turbulent vault pass. It was later revealed that Biles was experiencing mental health issues. She also withdrew from the individual all-around competition on July 28 to focus on her well-being 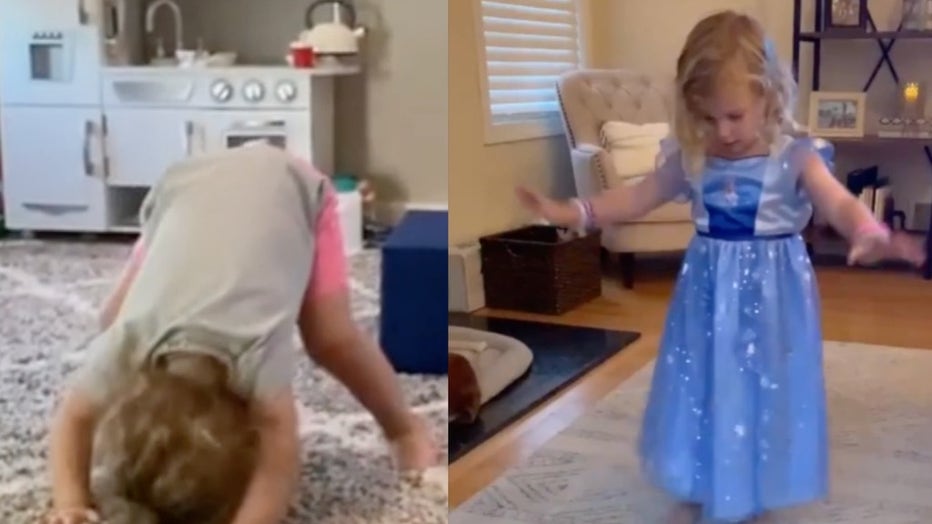 The 2020 Tokyo Olympics are inspiring future Olympians around the country. (and @MetsHomeRunGuy)

Since Biles withdrew from competition on Tuesday, professional athletes and public figures have sent messages of support. Michael Phelps, who was open about his own mental health struggles during and following the Olympics, said watching Biles struggle "broke my heart."

"Mental health over the last 18 months is something people are talking about," Phelps said. "We’re human beings. Nobody is perfect. So yes, it is OK not to be OK."

Whether it be through bravery or competition, the 2020 U.S. women’s gymnastics team has left its mark on the world and maybe even inspired future Olympians.