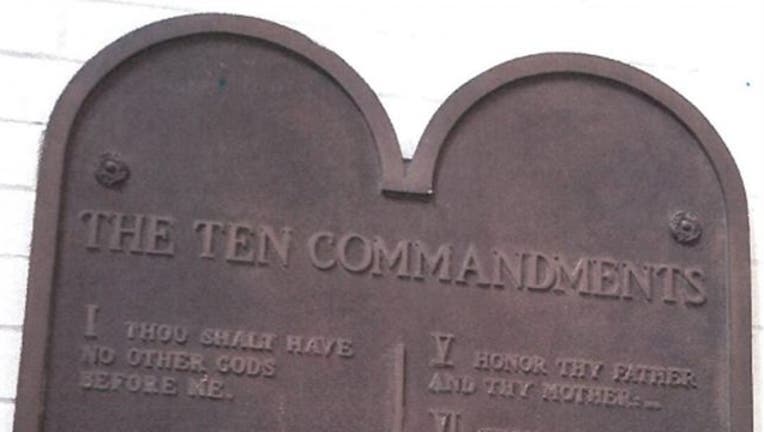 FOX NEWS - An Ohio middle school removed a 1920s-era Ten Commandments plaque after the Freedom From Religion Foundation complained about it.

The Wisconsin-based group that promotes separation of church and state and nontheism called the Joseph Welty Middle School plaque a "flagrant violation" of the First Amendment. The group claims a concerned district parent complained to FFRF that the plaque was prominently displayed near the auditorium entrance of the New Philadelphia, Ohio school.

“The district’s promotion of the Judeo-Christian bible and religion over nonreligion impermissibly turns any non-Christian or non-believing student into an outsider,” Christopher Line, representing FFRF, wrote in an April letter to the school. “Schoolchildren already feel significant pressure to conform to their peers. They must not be subjected to similar pressure from their schools, especially on religious questions.”

The class of 1926 gifted the plaque to the middle school. But the gift has been scrubbed from the building, according to school officials.

"In speaking with the district, it is my understanding that the plaque has been taken down and is no longer on display on district property," Brian J. DeSantis, an attorney representing the school district, wrote in a June 19 email to the FFRF.

The FFRF celebrated the removal of the Ten Commandments.

“We applaud the district for taking action to remedy this violation,” FFRF co-President Annie Laurie Gaylor wrote in a statement. “Students in our public schools are free to practice any religion they choose — or none at all. In America, we live under the First Amendment, not the Ten Commandments."

But the New Philadelphia Schools Superintendent David Brand said he disagrees with the FFRF's approach.

“With over 90 years on display, the plaque is recognized as part of the tradition and history of New Philadelphia City Schools,” Brand said in a statement, according to the Times Reporter newspaper.

Brand laments the "costs" it would be on local taxpayers and the "burden" on school officials. He said he plans to challenge the decision.

"Rather than engaging FFRF in an action where the community’s resources are at stake, the district will consider filing an amicus brief in a forthcoming case on the matter," he said.

Jeremy Dys, deputy general counsel for First Liberty Institute, which recently successfully litigated the Bladensburg Peace Memorial Cross case at the Supreme Court in June, told Fox News that about the same day the school took this down was when the highest court said this was "presumptively constitutional."

"We've got the Supreme Court, 6-3, that says the display of the Ten Commandments are welcomed on public property, including schools," Dys said. "The city of New Philadelphia Schools should put the display back up."