Griffin was previously convicted in federal court of a misdemeanor for entering Capitol grounds on Jan. 6, without going inside the building. He was sentenced to 14 days and given credit for time served.

The new ruling immediately removes Griffin from his position as a commissioner in Otero County in southern New Mexico. He also is barred from serving as a presidential elector.

"Mr. Griffin aided the insurrection even though he did not personally engage in violence," Mathew wrote. "By joining the mob and trespassing on restricted Capitol grounds, Mr. Griffin contributed to delaying Congress’s election-certification proceedings."

Griffin said he was notified of his removal from office by Otero County staff, who prevented him from accessing his work computer and office space at a county building in Alamogordo.

Griffin, who served as his own legal counsel at a two-day bench trial in August, called the ruling a "total disgrace" that disenfranchises his constituents in Otero County.

"The actions that are being taken are, I believe, perfect evidence of the tyranny that we're right now living under," Griffin said. "The left continues to speak about democracy being under attack, but is this democracy? Whenever you're removed from office by the civil courts by the opinion of a liberal judge."

The ruling arrives amid a flurry of similar lawsuits around the country seeking to punish politicians who took part in Jan. 6 under provisions of the 14th Amendment to the U.S. Constitution, which holds that anyone who has taken an oath to uphold the Constitution can be barred from office for engaging in insurrection or rebellion.

Ratified shortly after the Civil War, the provisions were meant in part to keep representatives who had fought for the Confederacy from returning to Congress.

At trial, Griffin invoked free speech guarantees in his defense and argued that removing him from office would cut against the will of the people and set a "dangerous precedent." Elected in 2018, Griffin withstood a recall vote last year but isn’t running for reelection or other office in November.

Mathews wrote that Griffin's arguments "disregard that the Constitution itself reflects the will of the people."

Griffin "overlooks that his own insurrectionary conduct on January 6 sought to subvert the results of a free and fair election, which would have disenfranchised millions of voters."

The lawsuit against Griffin was brought by three plaintiffs in New Mexico with assistance from the Washington-based Citizens force Responsibility and Ethics in Washington. Supportive briefs were filed by the NAACP and progressive watchdog group Common Cause. A federal court declined a recent request to take up the case.

Tuesday's judgement is "a historic win for accountability for the January 6th insurrection and the efforts to disrupt the peaceful transfer of power in the United States," Citizens for Responsibility and Ethics President Noah Bookbinder said in a statement. 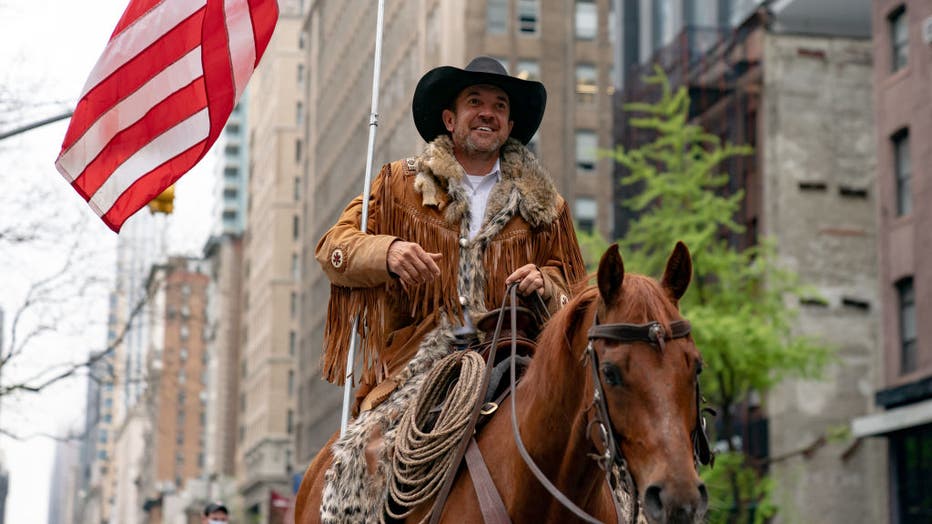 This year, Griffin voted twice as a county commissioner against certifying New Mexico’s June 7 primary election, in a standoff over election integrity fueled by conspiracy theories about the security of voting equipment in the Republican-dominated county.

Two other commissioners eventually agreed to certify, but Griffin cast the loan dissenting vote while acknowledging that he had no specific basis for questioning the results of the election — attributing his decision to "my gut feeling and my own intuition."

Griffin is among a dozen people charged in the Jan. 6 riot that had either held public office or ran for a government leadership post in the two and a half years before the attack. Of those, seven have been convicted of crimes for their participation.

Unlike Griffin, the members of Congress targeted for disqualified were neither charged nor convicted of crimes associated with the Capitol riot.

In Georgia, a federal judge allowed a 14th Amendment challenge against Rep. Marjorie Taylor Green to advance, but a state administrative law judge found there wasn’t sufficient evidence to back voters’ claims that she had engaged in insurrection, and Georgia Secretary of State Brad Raffensperger said Greene was qualified to run.

Greene won her primary, and the Georgia Supreme Court upheld that decision last week. The federal appeal is pending.

In North Carolina, a federal judge blocked the state elections board from formally examining whether U.S. Rep. Madison Cawthorn, who spoke at the rally that preceded the riot, should remain on the state's May 17 primary ballot.

Cawthorn narrowly lost that election, and later in May a federal appeals court reversed the lower court decision. The panel of the 4th U.S. Circuit Court of Appeals said the trial judge got it wrong when he ruled that an 1872 law that removed office-holding disqualifications from most ex-Confederates also exempted current members of Congress like Cawthorn. The lawsuit was ultimately dismissed as moot because Cawthorn isn’t on the November ballot.

Arizona state courts have kept U.S. Reps. Paul Gosar and Andy Biggs and a state legislator on the ballot amid efforts to disqualify them. A judge agreed in April with the lawmakers that Congress created no enforcement mechanism for the 14th Amendment, barring a criminal conviction.