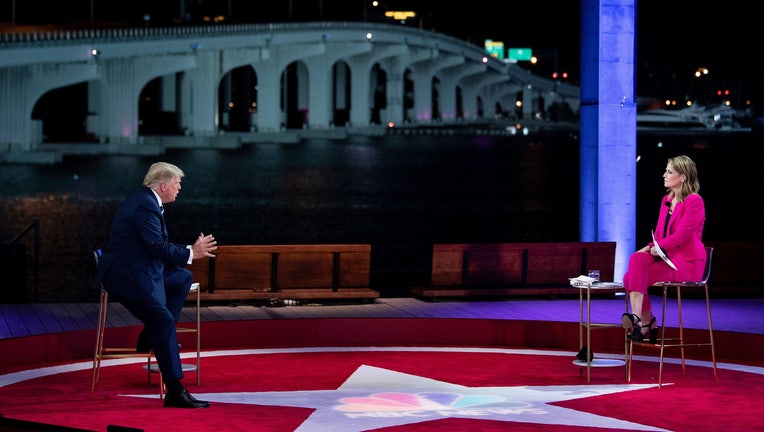 US President Donald Trump gestures as he speaks during an NBC News town hall event moderated by Savannah Guthrie at the Perez Art Museum in Miami on October 15, 2020. (Photo by BRENDAN SMIALOWSKI/AFP via Getty Images)

Guthrie pressed Trump on a variety of issues, including his administration's handling of the pandemic, and his own COVID-19 diagnosis, and his last negative test.

Trump wouldn't say whether he had tested negative on the day of his first debate with Biden on Sept. 29, allowing only, “Possibly I did, possibly I didn’t.”

RELATED: Trump, Biden go at it -- from a distance -- in town halls

Debate rules required that each candidate, using the honor system, had tested negative prior to the Cleveland event, but Trump would not answer Guthrie's question about when he last tested negative.

At one point, she questioned his use of Twitter, pointing to his retweet of a conspiracy theory regarding the death of Osama bin Laden.

“You retweeted to your 87 million followers a conspiracy theory that Joe Biden orchestrated to have SEAL Team 6, the Navy SEAL Team 6, killed to cover up the fake death of bin Laden,” Guthrie said. “Why would you send a lie like that to your followers?”

RELATED: President says he will accept results of 'honest election'

"I know nothing about it," Trump replied.

Guthrie countered, "You retweeted it."

Trump argued that it was a retweet of someone's opinion, adding, "I'll put it out there, people can decide for themselves. I don't take a position."

“I don’t get that,” Guthrie said in response. “You’re the president, you’re not like someone’s crazy uncle who can just retweet whatever.”

Trump complained about Guthrie's intense questioning, at one point telling her, "We should be on the same side."

Trump again sought to minimize revelations from a New York Times investigation that he has more than $400 million in debt and suggested that reports are wrong that he paid little or no federal income taxes in most years over the past two decades.

RELATED: Supporters line up hours ahead of President Trump's rally in Ocala

He was defensive about his administration’s handling of the coronavirus, which has claimed more than 217,000 lives in the United States, and evasive when pressed about whether he took a required COVID-19 test before his first debate with Biden. Angry and combative, Trump refused to denounce the QAnon conspiracy group — and only testily did so regarding white supremacists.

"You always do this," Trump said to Guthrie. "You've done this to me and everybody. Are you listening? I denounce white supremacy. What's your next question?"

RELATED: Election 2020: Will mailed-in ballots be delivered on time?

The Republican president also appeared to acknowledge revelations from a recent New York Times report that he was in debt and left open the possibility that some of it was owed to a foreign bank. But he insisted that he didn’t owe any money to Russia or any “sinister people” and suggested that $400 million in debt was a “very, very small percentage” compared to his overall assets.