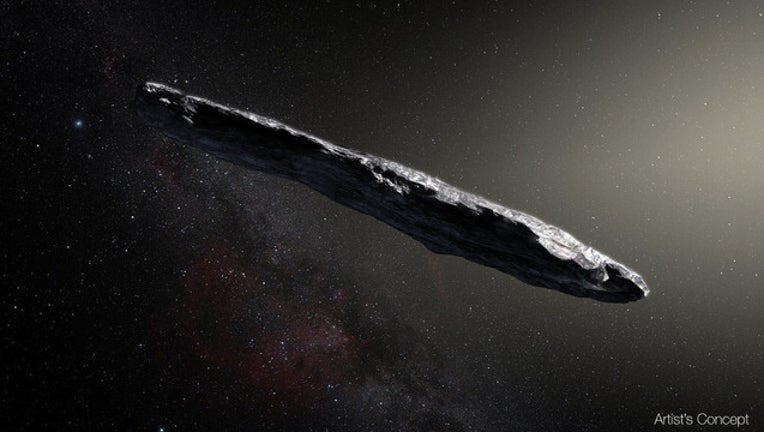 OUTER SPACE (FOX 13) - Ever since the discovery of a strangely-shaped space rock, scientists are trying to determine its origin before it exits our solar system.

The asteroid’s discovery was made in October by the University of Hawaii as its odd cigar-like shape passed by Earth. It has been named ‘Oumuamua, which is Hawaiian for “first messenger.”

On Wednesday, the global astronomical program, Breakthrough Listen, aimed its huge telescope from West Virginia in an attempt to detect any "signal the strength of a mobile phone coming out of this object."

"Researchers working on long-distance space transportation have previously suggested that a cigar or needle shape is the most likely architecture for an interstellar spacecraft," the program announced in a news release, "since this would minimize friction and damage from interstellar gas and dust."

The program's findings have yet to be released.

Unlike other asteroids or comets previously observed in our solar system, ‘Oumuamua is up to 400 meters long and perhaps 10 times as long as it is wide, according to NASA.

It spins about every seven hours and at a rate “that could tear a loosely’-bound rubble pile apart,” according to an article by Scientific American. It is quick enough to escape the Sun's gravity, which is strange since all planets, asteroids and comets belonging to our system follow paths around it.

The article added, “Whatever ‘Oumuamua is, it appears to be quite solid -- likely composed of rock, or even metal -- seemingly tailor-made to weather long journeys between stars. So far, there are few if any wholly satisfactory explanations as to how such an extremely elongated solid object could naturally form."

A study funded by NASA, and later appeared in the journal, Nature, describes the object may have been wandering through the Milky Way, unattached to any star system, for hundreds of millions of years before it entered into ours.

According to Scientific American, ‘Oumuamua is already halfway to Jupiter. Observations from large ground-based telescopes will continue until the strange rock becomes too faint to detect, which can occur sometime after mid-December, NASA reports.