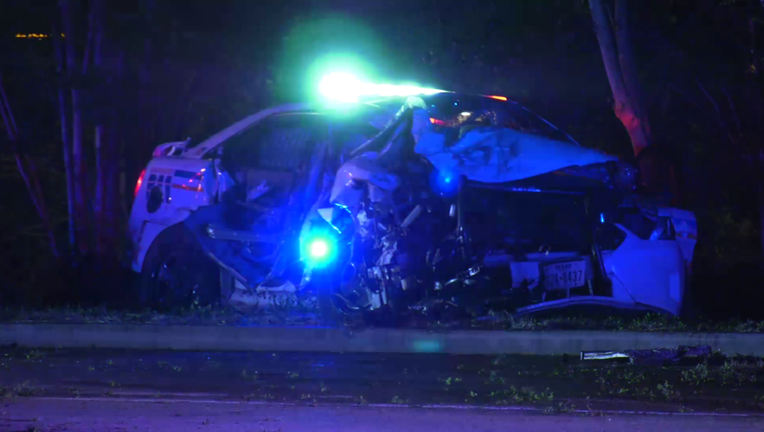 HOUSTON - Charges have officially been filed against a driver accused of causing the death of a rideshare driver earlier this month.

Uber driver killed during pursuit of another driver

Harris County Sheriff's Office investigating after a pursuit for a 17-year-old driver ended with another driver dead.

27-year-old Daniel Martinez was arrested Thursday and charged with felony murder and failure to stop and render aid.

Back on Aug. 2, Martinez fled from a Harris County Sheriff’s Office deputy during an attempted traffic stop.

RELATED: Uber driver killed after being struck by deputy during early morning chase along Katy Freeway

According to a report, a deputy saw a man and woman involved in an apparent domestic disturbance in a parking lot at the intersection of Westgreen and Park Row around 1:30 a.m.

That’s when, authorities said, the man and woman got into a gray Chrysler 300 and left the parking lot with the deputy following. The deputy then activated his lights and sirens after seeing the car being driven at 90 miles per hour in a 50 mile per hour zone.

Authorities said, Martinez initially stopped in a U-turn lane, but then sped away, beginning a pursuit that lasted about three minutes.

Investigators believe that Martinez was driving about 118 miles per hour when he swerved around a Honda Accord, driven by Bismark Asare, 40, in the 18200 block of Katy Freeway eastbound service road, giving the deputy little time to react before striking Asare’s vehicle. A male passenger who was in Azare’s vehicle survived the crash.

Authorities said the deputy was not seriously injured. Other deputies arrived at the crash scene and began performing CPR on Asare after finding him unconscious in his car. He was later pronounced dead at the hospital.

The Harris County Sheriff’s Office said that the Chrysler 300 also crashed and Martinez fled on foot.

Investigators said two passengers in his vehicle, a male and female, also fled the scene. Charges have not yet been filed against the passengers, but the investigation is ongoing.