Uber driver killed during pursuit of another driver

Harris County Sheriff's Office investigating after a pursuit for a 17-year-old driver ended with another driver dead.

HARRIS COUNTY, Texas - The Harris County Sheriff’s Office is investigating a deadly crash that was caused by a suspect who didn’t stop for a patrol deputy.

According to the Harris County Sheriff’s Office, a deputy observed a man and woman involved in an apparent dispute in a parking lot near Fry Road and Katy Freeway around 1:30 a.m. Sunday.

Authorities said the man and woman got into a gray Chrysler 300 and left the parking lot with the deputy following as they traveled westbound and eastbound on the Katy Freeway service road. The Chrysler then stopped on the road and began traveling at about 90 miles per hour in a 50 mile per hour zone.

That’s when the deputy activated his emergency lights and attempted to stop the vehicle, but the driver refused.

Authorities stated that the Chrysler and the patrol deputy were traveling in the 18200 block of the service road when the suspect driver swerved to avoid hitting a 2014 Honda Accord that was being operated by a rideshare driver.

A release said that the deputy was unable to avoid the Honda and struck it from behind around three minutes after the pursuit began. That’s when the patrol car struck a tree and the Honda came to rest in the median. 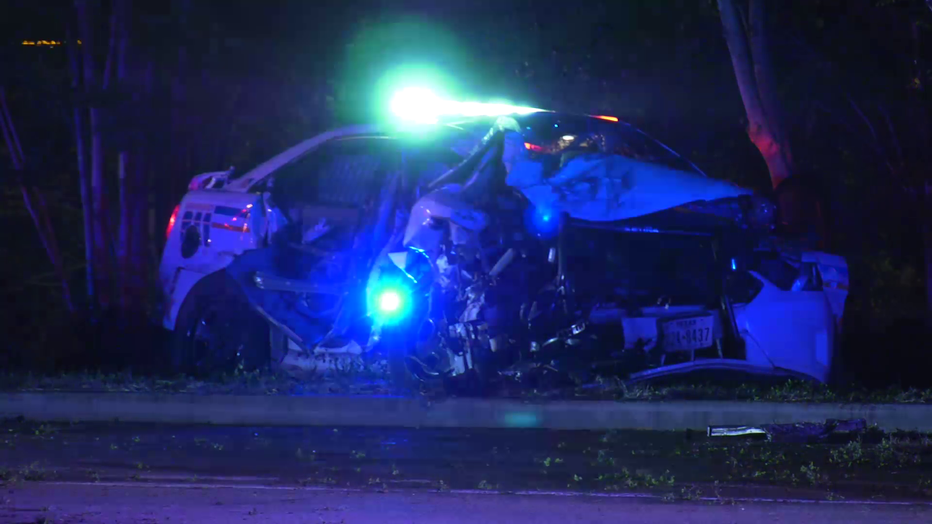 Authorities said that both suspects fled on foot across Interstate 10 where the male suspect, who was 17 years old and had suffered non-life-threatening injuries, was captured by deputies in the parking lot of Texas Children’s Hospital. Authorities added the 17-year-old was out on bond.

The woman in the vehicle, police said, is believed to have entered a Jeep, possibly black and white in color, and fled the scene. Investigators are actively searching for the woman.

The driver of the Honda, 40-year-old Bismark Asare, was taken to Memorial Hermann Katy Hospital where he was pronounced dead. Authorities said his 27-year-old male passenger was taken to the hospital with non-life-threatening injuries.

Authorities said the patrol deputy was treated at the hospital and released.

The Harris County District Attorney’s Office is leading the prosecution of the suspects and will determine criminal charges.

"We have way, way too many pursuits that end tragically. And the easy way, the only way to stop that is to stop. When law enforcement turns on their lights, asks you to stop, it's a command, stop," said Sean Teare with the Harris County District Attorney's Office.

If you have any information about this crash, contact Crime Stoppers of Houston at (713) 222-TIPS.