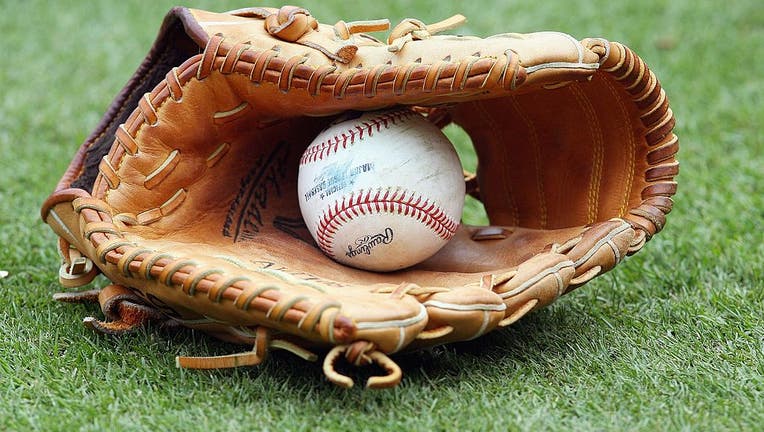 ARLINGTON, TX - APRIL 8: A general view of a MLB ball and glove taken before the game between the Boston Red Sox and the Texas Rangers at Rangers Ballpark April 8, 2007 in Arlington, Texas. (Photo by Ronald Martinez/Getty Images)

The wood-bat MLB Draft League is launching with five teams and could add a sixth, MLB said Monday. Teams will play a 68-game regular season that includes an All-Star break that would coincide with the draft in early July.

Teams are going to communities that lost franchises when MLB began shrinking the affiliated minor leagues from 160 to 120 teams.

The reduction this offseason followed the expiration of the Professional Baseball Agreement, which governed the relationship between the majors and minors. MLB has planned to eliminate the separate governing body of minor league baseball.

MLB also announced Monday that the eight-team Pioneer League will lose its affiliated status and become an independent “Partner League.” MLB has pledged to provide initial funding for operating expenses and will install scouting technology at Pioneer League parks.

The founding members of the MLB Draft League are located in Ohio, Pennsylvania, West Virginia, and New Jersey: the Mahoning Valley Scrappers, the State College Spikes, the Trenton Thunder, the West Virginia Black Bears, and the Williamsport Crosscutters. MLB said it is in discussions with a sixth team that it hopes to announce soon.

The season will run roughly from late May through mid-August, broken into halves. The first half will be a showcase for draft-eligible high school, college, and junior college players. Following a multi-day break for the draft, rosters will be restocked with the best players passed over by MLB teams who are still interested in signing.

The start of the season will overlap with the College World Series, meaning some top college players won’t be able to join until after opening day, similar to other college summer leagues like the Cape Cod League.

The league will be operated by Prep Baseball Report — a scouting, events, and media organization focused on youth ball — and former Cape Cod League coach Kerrick Jackson has been appointed president.

MLB said in a statement that players will “receive unprecedented visibility to MLB club scouts through both in-person observation and state-of-the-art scouting technology and educational programming designed to prepare them for careers as professional athletes.”

Morgan Sword, MLB’s executive vice president of baseball economics and operations, calls this venture a “one-of-a-kind league” that will allow fans to “see top prospects and future big-league stars in their hometowns.” He adds that MLB is committed to “preserving and growing baseball in communities around the United States.”

MLB announced in September that the Appalachian League, formerly a Rookie-level affiliated league, would be transformed into a wood-bat college summer league.