President-elect Joe Biden commented on the remarks made by Senate Majority Leader Mitch McConnell who stated the results of the Electoral College will determine who the next president will be.

Republicans are increasingly pointing to a December deadline as they give Trump time and space to exhaust his legal challenges. That's when the states face a deadline to certify results and a Dec. 14 deadline for the Electoral College to cast its votes. It's also about the time it took to resolve the 2000 election dispute between Republican George W. Bush and Democrat Al Gore.

“Until the Electoral College votes, anyone who is running for office can exhaust concerns,” McConnell told reporters on Capitol Hill.

“It's not unusual, should not be alarming. At some point here we’ll find out finally who was certified in each of these states. The Electoral College will determine the winner.”

Trump's GOP allies in Congress have largely declined to congratulate Biden, and instead they are backing up Trump's efforts to pursue legal challenges, even though privately many Republicans doubt he has any legitimate path to change the outcome. Trump and his GOP allies haven’t offered any proof of election fraud and their legal challenges have largely been rejected by the courts. 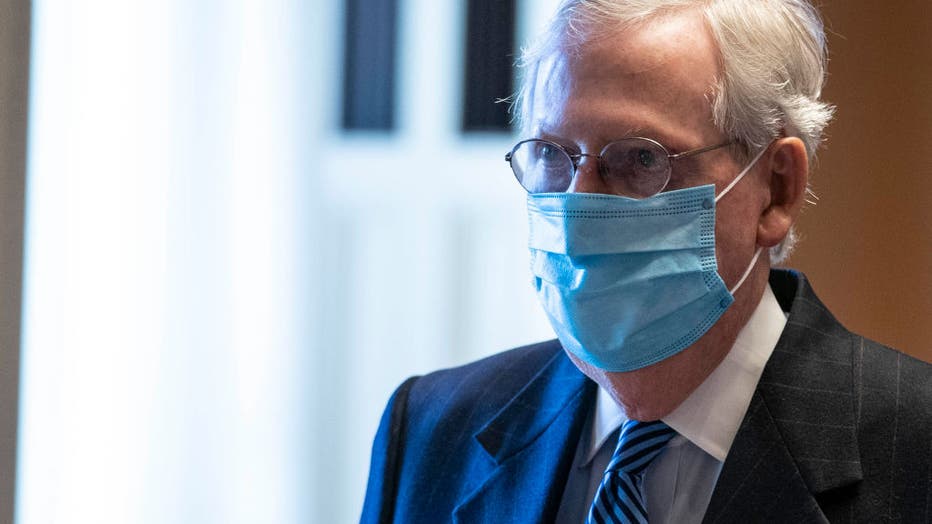 FILE - Senate Majority Leader Mitch McConnell (R-KY) walks from the Senate floor to his office in the U.S. Capitol ahead of the weekly Senate Republican caucus luncheon on November 10, 2020 in Washington, DC. (Sarah Silbiger/Getty Images)

Still, Republicans are unwilling to stray from Trump, even in defeat, or anger his most ardent supporters ahead of the Jan. 5 runoff elections in Georgia that will determine majority control of the Senate. Two Republican senators are struggling to keep their seats against Democratic challengers.

McConnell noted the potential turmoil during the transition in praising ousted Defense Secretary Mark Esper, who Trump fired on Monday.

McConnell said he expects to speak “soon” with new Acting Defense Secretary Chris Miller about threats from terrorists or foreign adversaries ”who may seek to exploit a period of uncertainty.”

He said the times call for “continued sober and steady leadership” at the Pentagon.

Senate Majority Leader Mitch McConnell says President Donald Trump has the right to question election results and also noted there was no evidence of interference with US elections from foreign adversaries.

Democrats, meanwhile, are pushing ahead in preparation for the Biden administration, particularly the president-elect's immediate roll out of a sweeping COVID-19 plan.

He warned McConnell and Republicans not to block efforts or settle for a more modest bill. “We cannot pretend this pandemic is nearly over,” he said.

Schumer decried Trump's attempts to claim victory, and said the president is “undermining faith in our elections.”

Unlike the Bush-Gore election which was held up over hundreds of contested ballots in one state, Florida, Trump's team is challenging the outcome in several states with tens of thousands of ballots. Trump would need to produce ample evidence of impropriety to undo Biden's lead, which appears unlikely.

Schumer said, “The country is ready to move on.”

Both McConnell and Schumer were reelected as party leaders during private Senate elections Tuesday, but it’s unclear whether McConnell will retain his role as majority leader or cede it to Schumer as the final races for the U.S. Senate play out.

Last week’s elections left the chamber split, 48-48, heading into the new Congress next year. Republicans brushed back Democratic challengers in several states, but failed to lock down the seats needed to retain their majority.

The races for the two seats in Georgia heading to a Jan. 5 runoff are swiftly becoming a showdown over control of the chamber. The state is closely divided, with Democrats making gains on Republicans, fueled by a surge of new voters. But no Democrat has been elected senator in some 20 years.

Two other seats in North Carolina and Alaska remain too early to call. In North Carolina, Sen. Thom Tillis is trying to fend off Democratic challenger Cal Cunningham in a tight race. Alaska GOP Sen. Dan Sullivan is favored for another term against Al Gross, an independent running as a Democrat.

Even if Republicans secure the final two races where ballots are still being counted in North Carolina and Alaska, they would still fall short of the 51 seats needed.

The math has become more challenging for McConnell because the vice president of the party holding the White House casts the tie-breaking vote in the Senate. Next year that would be Vice President-elect Kamala Harris. That means 50 seats for Democrats would result in control over the chamber. But Republicans would need 51 seats to cement their hold on power.

The stakes are high for all sides, with strategists expecting an eye-popping $500 million could be spent in the weeks ahead.