The White House is extending the pause on federal student loan payments through the end of June 2023 in an effort to "alleviate uncertainty" for borrowers as the Biden administration battles at the Supreme Court to put President Joe Biden’s student loan handout into effect.

According to Accenture, a contractor with the U.S. Department of Education which sent the emails, Americans were sent the inaccurate emails on Nov. 22 and 23 on behalf of the Education Department.

"Accenture Federal Services regrets the human error that led to an email being sent to a number of student loan debt relief applicants with an inaccurate subject line," a spokesperson with Accenture confirmed to FOX Television Stations. "Working closely with the Department, Accenture Federal Services is reviewing quality control measures to support accurate and timely communications to applicants in the Student Loan Debt Relief program."

Corrected emails will be sent to those recipients within the next few days.

A spokesperson at the Department of Education also issued a statement to FOX, writing, "Communicating clearly and accurately with borrowers is a top priority of the Department. We are in close touch with Accenture Federal Services as they take corrective action to ensure all borrowers and those affected have accurate information about debt relief."

"We reviewed your application and determined that you are eligible for loan relief under the Plan," Education Secretary Miguel Cardona wrote in an email. "We have sent this approval to your loan servicer. You do not need to take any further action." 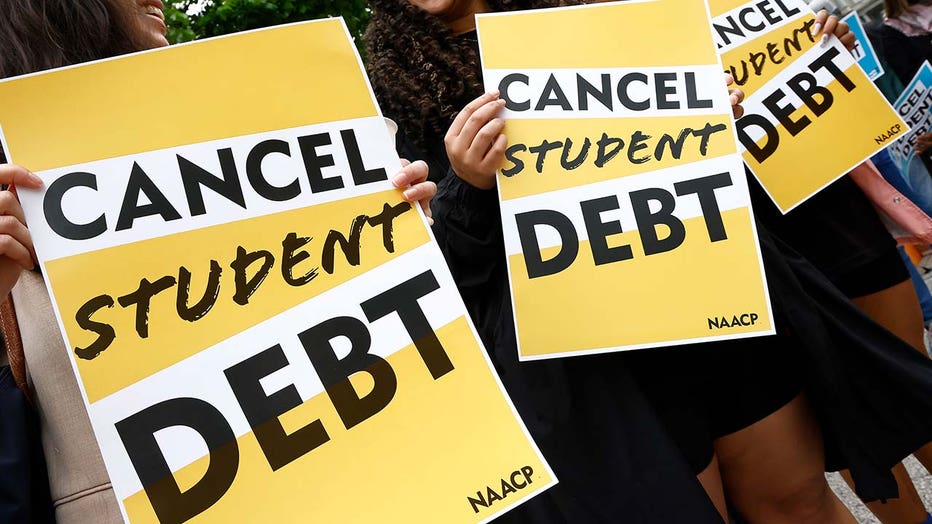 Student loan borrowers gather near The White House to tell President Biden to cancel student debt on May 12, 2020 in Washington, DC. (Photo by Paul Morigi/Getty Images for We, The 45 Million)

"Unfortunately, a number of lawsuits have been filed challenging the program, which have blocked our ability to discharge your debt at present," Cardona continued. "We believe strongly that the lawsuits are meritless, and the Department of Justice has appealed on our behalf."

Cardona said the Education Department would continue to update borrowers with new developments, saying their debt would be discharged if and when the department prevails in court.

The Department of Education is currently no longer taking applications for student loan relief, as several lawsuits against the program persist.

"Courts have issued orders blocking our student debt relief program," a message reads on the Federal Student Aid website. "As a result, at this time, we are not accepting applications. We are seeking to overturn those orders."

The student loan forgiveness plan aims to forgive up to $10,000 in federal student loans or up to $20,000 for Pell Grant recipients. Eligible borrowers can’t make more than $125,000 per year if filing single or $250,000 for married couples.

The Supreme Court agreed Thursday to hear arguments over President Joe Biden's student loan forgiveness plan in February 2023. But an injunction blocking the administration's relief plan remains in place, according to a Supreme Court brief.

The inquisition in question was placed by the St. Louis-based 8th Circuit Court of Appeals. It stems from a lawsuit issued by Nebraska, Missouri, Arkansas, Iowa, Kansas and South Carolina.

RELATED: Student loan forgiveness: What to know if you've applied for relief

These six states argue the plan would harm their tax revenues. They also disagree with the Biden administration's efforts to justify its student loan forgiveness plan under the Higher Education Relief Opportunities for Students (HEROES) Act of 2003. The Biden administration argues that this law gives it the authority to forgive student loan debt in response to the national emergency of COVID-19.

However, the six states claim it is a false "pretext" to approve widespread student loan relief.