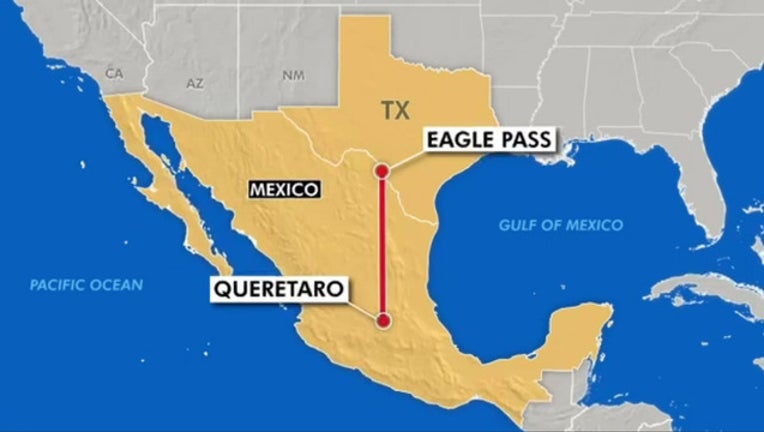 The governor of the northern state of Coahuila described the migrants as "asylum seekers," suggesting all had express intentions of surrendering to U.S. authorities.

While previous caravans had travelled to the border city of Tijuana, where migrants have to join a waiting list to make asylum claims, the relatively open border around Eagle Pass is different. The border is marked mainly by the Rio Grande and lacks the long sections of high barriers found in Tijuana.

Still, the U.S. Department of Homeland Security vowed that the "lawless caravan" would not be allowed in.

"Approximately 2,000 aliens have arrived in northern Mexico as part of a 'caravan' seeking to cross the border into Texas. Illegal entry will not be tolerated and we stand ready to prevent it," DHS Secretary Kirstjen M. Nielsen wrote in a statement Tuesday, adding: "DHS will take all steps to ensure the safety and security of law enforcement personnel on the front lines."

VIDEO: Mexican police in riot gear line up at US border as migrant caravan arrives

An improvised shelter was set up for the migrants at an unused maquiladora factory, and local officials said the migrants had been given sleeping mats, blankets, food and wireless access. State child welfare officials reported that 46 unaccompanied youths aged between 15 and 17 were in the caravan.

The area from Piedras Negras east to Nuevo Laredo has long been dominated by the now-fragmented Zetas cartel. The caravan was escorted by soldiers and police, and the state government said migrants wouldn't be allowed to split off from the main group because "these types of caravans have been victims of organized crime groups that try to force the migrants to work for them."

"That is why we are being strict about security," Coahuila state Interior Secretary Jose María Fraustro said.

Local media reported that some migrants objected to guards and closed gates at the improvised shelter, saying they did not want to be locked in.

Participants in caravans of mainly Honduran migrants last year mostly went to the border city of Tijuana in their bid to reach the United States. But Tijuana officials said their city was overwhelmed and unprepared to receive more migrants, after a mass rush by migrants trying to cross the border led to temporary closure of some crossings.

A second, larger caravan of several thousand migrants is expected to set out across Mexico soon.

The U.N. refugee agency noted that Mexico had received 12,574 requests for humanitarian visas Jan. 17-29, almost all from migrants who left Honduras, Guatemala and El Salvador.