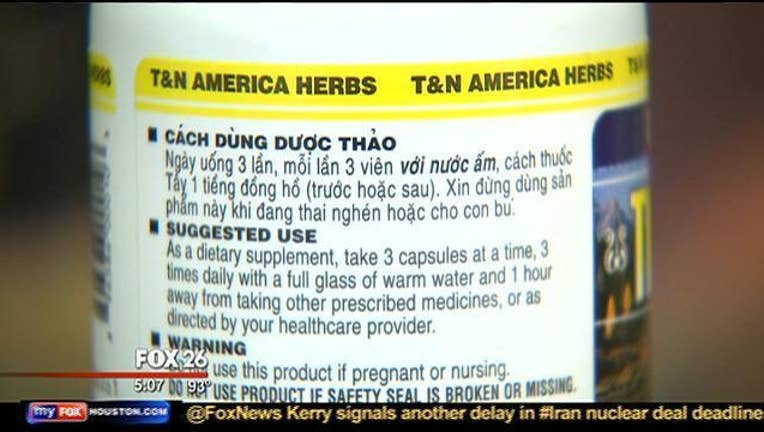 It's a multi-billion dollar industry fueled by people who are looking for herbal supplements.

She says a presence filled with false advertisements.

Last month Tran sued a Houston herbal supplement company alleging they mislead her community promising cures and treatment for cancer and other illnesses.

Now she's turned her attention to two other companies in California she says uses false advertisement. In a 1000+ page lawsuit she points the finger at A1 Top World Products Inc. and T&N America Herbs.

Tran says, "They are specifically claiming their drug treats cancer, diabetes, hepatitis C and B and all kind of diseases."

The suit claims the companies use the standard warnings on bottles saying any statements have not been approved by the FDA.

But Tran says the California companies mislead consumers in advertisement and in pamphlets included with the supplements.

Dr. Rhonda Jordan says supplements have a usefulness but there's no way to tell if they're worth buying.

Jordan says, "a lot of doctors are promoting supplements but a lot of time it's hard for us to promote it because we don't know where the patients are gonna get it from and if the people they are getting it from are reputable."

Thomas Trong Vo with T & N America Herbs tells Fox 26 by phone he's never mislead his customers. He says that would be against the law.

We have not received a response from the second company sued in what Tran calls a class action lawsuit.