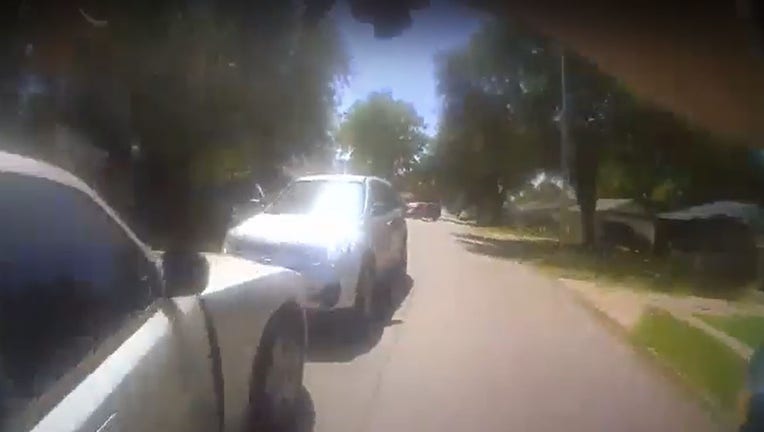 A still image from body-worn camera footage moments before Jalen Randle was shot.

The videos released include footage from the body-worn camera of the officer who fired his weapon.

The police department identified him as Officer S. Privette, who was sworn in as an officer in December 2014 and is assigned to the Narcotics Division.

Click here to view the footage released by HPD. Warning: The video is graphic and contains strong language.

According to police, members of the HPD Narcotics Division Tactical Team were searching for Randle, 29, who was wanted on three felony warrants.

RELATED: Independent autopsy reveals Jalen Randle, killed by HPD, was shot in back of neck

Officers saw Randle get into the passenger seat of a vehicle, which left the location, authorities say. According to HPD, officers tried to initiate a traffic stop, but the driver of the vehicle refused to stop and a pursuit began.

Officers reportedly performed a PIT maneuver and were able to block the vehicle’s path. The vehicle came to a stop.

The police department says Randle got out of the passenger side of the vehicle and then reached back into the vehicle.

Police say an officer gave a verbal command to Randle to show his hands, and then the officer fired one shot. Randle was struck.

In the moments leading up to the shooting, Officer Privette’s body-worn camera video shows the officer get out of the patrol vehicle holding a gun. "Hey let me see your hands," is heard, followed by a gunshot. Randle collapses to the ground.

HPD says officers began medical treatment on the suspect before he was transported by paramedics. He was pronounced dead at the hospital.

According to HPD, at the time of the shooting, Randle had a bag, which had a gun in it.

Earlier this month, Randle’s family spoke at a press conference alongside civil rights attorney Ben Crump and demanded that the body cam video of the shooting be released. They also revealed that an independent autopsy showed that Randle had been shot in the back of the neck.