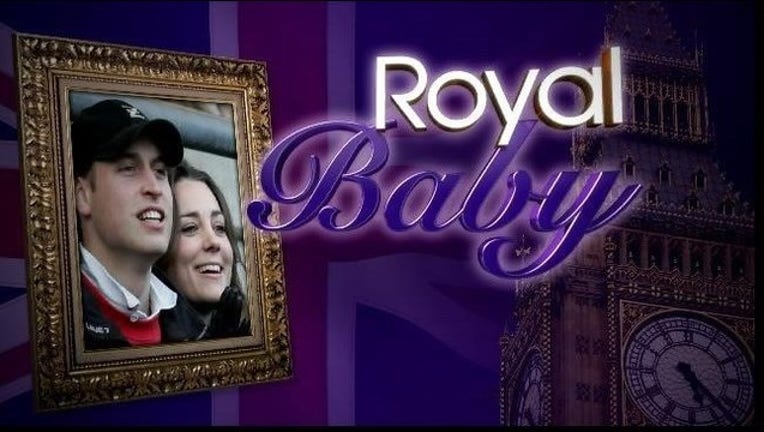 Die-hard royal fans who had been camping for days outside the hospital danced with delight, chanting "Princess! Princess!" and "Hip, hip, hooray!"

A town crier in elaborate costume shouted out the news at the hospital's door, clanging his bell to welcome the new royal.

"May our princess be long-lived, happy and glorious," said Tony Appleton, reading from a scroll in a booming voice.

Later, hundreds of tourists and well-wishers crowded outside the gates of Buckingham Palace, cheering and screaming as officials placed a traditional birth announcement on a golden easel.

Kate, 33, and her infant were doing well, and Prince William was present for the birth, officials said.

The princess is fourth in line to the throne and the fifth great-grandchild of Queen Elizabeth II. The statement said senior royals have been informed and "are delighted with the news."

Kate, who wed William in April 2011, gave birth to Prince George at the same hospital in July 2013.

The name of the newborn wasn't expected to be announced immediately. When George was born, officials waited two days before announcing his name.

Anticipation has been building for weeks. Kate had told a well-wisher earlier this year that the child was due in the second two weeks of April, kicking off what the tabloid press called the Great Kate Wait. The world's media had set up their positions outside the hospital for days, but were still caught slightly off guard by the speed with which officials announced the birth.

"I'm top of the world," said royal camper Terry Hutt, 80, decked out in patriotic Union Jack gear. He said he did not expect the birth to happen as soon as it did, but said: "Babies come when they're ready."

"If Diana was here, she'd be very, very proud," he added, referring to the late Princess Diana, William's mother.

Betting had for weeks ran heavily in favor of the child being a girl, despite any apparent evidence to back that up.

All the top bets for the baby's name have been for girls. Alice and Charlotte are the clear favorites, followed by Elizabeth, Victoria and Diana - all names with strong connections to royal tradition.

Prince Charles has signaled - twice - that he was hoping for a granddaughter, which led some to speculate that Charles had some inside information.

Many Britons, too, say they had hoped for a princess: The monarchy has not welcomed a princess born this high up the line of succession since Princess Anne, the queen's second child, was born in 1950.

Princesses Beatrice and Eugenie, the daughters of Prince Andrew and Sarah Ferguson, were fifth and sixth in line at the time of their birth.

At 21 months, George is currently third in line to the throne, after his grandfather Prince Charles and William. The newborn becomes the fourth in line, bumping Uncle Harry to fifth place.

Thanks to a recent change in law, the princess will hold her place in the line of succession that for centuries had put men ahead of their sisters. The change means that no younger brother will be able to overtake the newborn princess in the order of preference to inherit the throne.

Nonetheless, the princess should not have to worry about one day becoming queen. Royal succession rules dictate that the throne always passes to the eldest child, and younger siblings only get to step up to the job in rare circumstances - in the cases of an illness, death, or abdication, for example.

The public is likely to get its first view of the newborn when Kate and William leave the hospital, where Kate would be residing in style.

Each en-suite in the private maternity unit has Wifi, satellite television, a radio, a safe, a bedside phone and a refrigerator. The wing also offers a "comprehensive wine list should you wish to enjoy a glass of champagne and toast your baby's arrival."

Kate gets a 10 percent loyalty discount, as she had her first child there as well. A suite now costs $10,034 for a one-night stay with normal delivery. Doctors' fees are extra.