Woman marries man who saved her in Vegas shooting

The pair met just 24 hours prior to the 2017 mass shooting and escaped together during the rampage. They later fell in love and tied the knot.

SAN DIEGO - A man and woman who met just 24 hours before they escaped the 2017 Las Vegas mass shooting together have since fallen in love and gotten married.

“Austin never left my side that night. Hand in hand and complete strangers we ran across the entire festival grounds trying to escape the gunfire,” Chantal Melanson said of her now husband, Austin Monfort.

The couple met at Gilley’s Saloon in Las Vegas while in town for the Route 91 Harvest Festival, just a day before a gunman would open fire on concertgoers from the Mandalay Bay Hotel — killing 59 people and injuring hundreds more.

“I thought he was really nice, handsome and tall,” Melanson, 29, told People, who said she initially gave Monfort a hard time for “not wearing cowboy boots at a country bar.”

The pair ended up dancing the night away and exchanging numbers.

"He was so easy to talk to, it felt like we knew each other forever," Melanson added.

They made plans to meet up on the last day of the festival, October 1. While enjoying Jason Aldean’s closing performance, shots rang out — and the pair suddenly found themselves “on the ground with gunshots that seemed to be coming from every direction,” Melanson wrote on the couple’s joint Instagram.

As 64-year-old Stephen Paddock fired shots from the 32nd floor of the hotel, resulting in the deadliest mass shooting in U.S. history, Melanson said she remembers “laying on the ground just looking into Austin’s eyes, trying to make sense of everything.”

“Next thing I knew, Austin was holding my hand and we were running through the entire grounds trying to make it to safety,” she told People.

At first, both thought the noises were fireworks. Monfort said he felt compelled to protect her once he realized what was happening.

"I felt a sense of responsibility for Chantal," Monfort, 24, told People. "She was with me and not her friends. I felt like not only did I have to get myself out, but also her. Keeping her calm and getting her out kept me calm, and didn’t allow me to panic."

They ended up in a taxi with a wounded spectator and went to the hospital, where they stayed the rest of the night. In the morning, they said their goodbyes — Monfort returning home to Southern California and Melanson back to Canada. 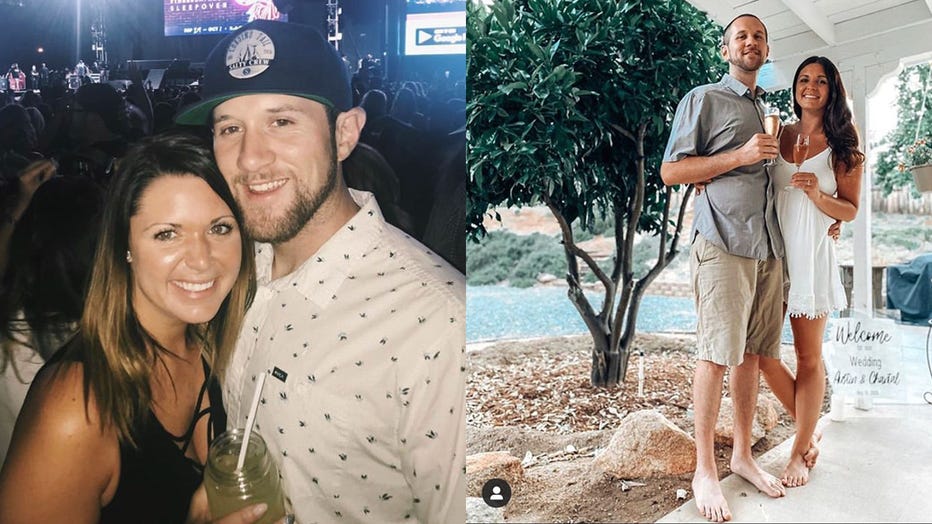 The couple is now living in Southern California and has documented their relationship on Instagram. (Photo by Andrew Matthews/PA Images via Getty Images)

The two kept in touch over the next few months, and soon, loved bloomed as they processed the trauma of what happened together.

They got engaged in March of 2019 when Melanson visited California, according to Instagram. They later married in a San Diego courthouse and planned a traditional celebration with friends and family this month in Las Vegas, which has been postponed due to the coronavirus pandemic.

"I felt safe with him — I didn’t want to leave his side," Melanson told People about her husband and the tragedy they experienced together. "In many ways, he did save my life."