A group of local women put on their hard hats to help rebuild a South Park home while busting misconceptions in a non-traditional industry.

HOUSTON - A group of Houston women put on their hard hats to help rebuild a South Park home, but they were also working to bust misconceptions in a non-traditional industry. A team of nearly 40 showed up Saturday morning to work on the home. The group was made up of all women from all walks of life.

"I spent 21 years in the education industry before I came into construction," says Nancy Cagle, founder of the organization, Ladies Operating for Growth in Construction (LOGIC).

Some members of the crew came with decades of projects under their belts while others say they were using a saw for the first time. They all worked side by side to wrap up National Women in Construction Week, partnering with the organization Rebuilding Together.

"At no cost to the homeowner, we serve low-income homeowners in some of the least resourced, poorest neighborhoods in Houston," says CEO Christine Holland. Saturday’s team picked up parts of a months-long project, continuing repairs to the home of U.S. Army veteran Francine Roberson.

"Quite a bit of work has been done to her house. We’ve stabilized the structure. We have put a new roof on… there was mold we needed to remove, so she could be safe living here," explains Holland.

The volunteers come from 15 construction companies throughout Houston and by signing up for the project are also hoping to increase the visibility of women in construction.

"We bring a different perspective to the meetings we hold in the field and in the office," says Megan Hall of Karsten Interior Services.

According to the Houston Business Journal, women made up about 23 percent of the construction workforce in 2019. The numbers for 2022 are expected to be higher as many women sought new careers during the pandemic. 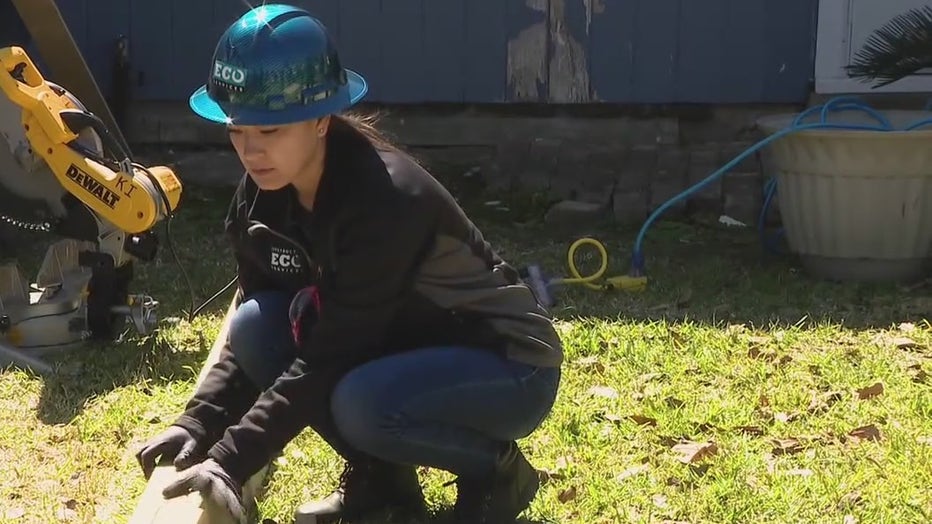 The crew explains that they deal with some misconceptions of working in construction, like a lack of femininity, but many of them like to trade their hardhats for heels at the end of the day. Others don’t, but either choice doesn’t make any of them less of a woman.

Women in the field also add they don't deal with much catcalling anymore. Instead, they say self-doubt can be the real problem.

"That intimidation starts making you feel like, ‘oh, I can’t do this; I’m not equipped to do this,’ but we’re here to say if you’ve got the skill-set and the desire, 100% you are in the right place," says Cagle.

Organization leaders are working to promote construction as an option for women studying STEM or looking for a career switch after years of industry advancements.

"Back at one time, a woman would’ve had to wear a man’s glove," says Cagle.

Nowadays, they had enough uniform options to hold a "Women in Construction Fashion Show" as part of their 2022 calendar. The Women In Construction week of events was meant to help boost camaraderie as the minority and build each other up while also re-building their community.

"There is a world out there for us," says Women in Construction Week Chair Nora Casanova."We just got to keep supporting and making this program stronger."