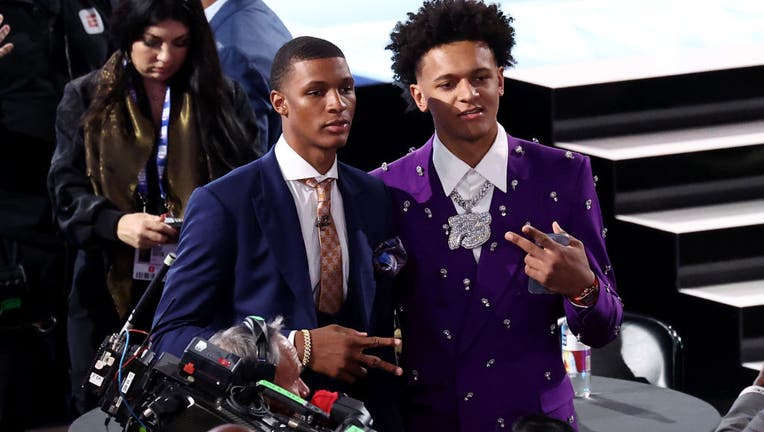 NEW YORK, NEW YORK - JUNE 23: Jabari Smith Jr. and Paolo Banchero pose for photos during the 2022 NBA Draft at Barclays Center on June 23, 2022 in New York City. NOTE TO USER: User expressly acknowledges and agrees that, by downloading and or using t

Smith was one of three first-round picks the Rockets had in this year's draft. Houston also had the 17th pick, which the team received as part of the trade for James Harden, and the 26th pick but whoever is drafted in that slot will go to the Dallas Mavericks once the trade for center Christian Wood is official.

The Rockets have finished with the NBA's worst record the last two seasons after reaching the playoffs in each of the previous eight seasons. After trading Harden and the rest of their established stars, Houston went all in on the rebuild, looking to develop young draft picks to bring the team back into contention.

Smith comes to Houston after the power forward averaged 16.9 points, 7.4 rebounds and two assists per game to win SEC freshman of the year, All-SEC first-team and second-team All-America honors.

Green had a solid rookie year, starting 67 games and averaging 17.3 points, 2.6 assists and 3.4 rebounds last season. Green was one of four first-round picks the Rockets had last season, as they also added Alperen Sengun at 16, Usman Garuba with the 23rd pick and Josh Christopher at 24.

Houston is counting on Sengun to be its long-term solution at center after dealing Wood. He played mostly a reserve role last season, appearing in 72 games with 13 starts. The Turkish player averaged 9.6 points and 5.5 rebounds as a rookie.

Christopher also contributed off the bench last season, averaging 7.9 points, 2.5 rebounds and two assists. Garuba played in just 24 games as a rookie after missing significant time with a broken wrist.

The Rockets will expect Smith to play immediately as they move on from Wood, who led the team in scoring in each of the last two seasons. If the 19-year-old starts as expected, the team will field an extraordinarily young starting lineup with four players under 22.