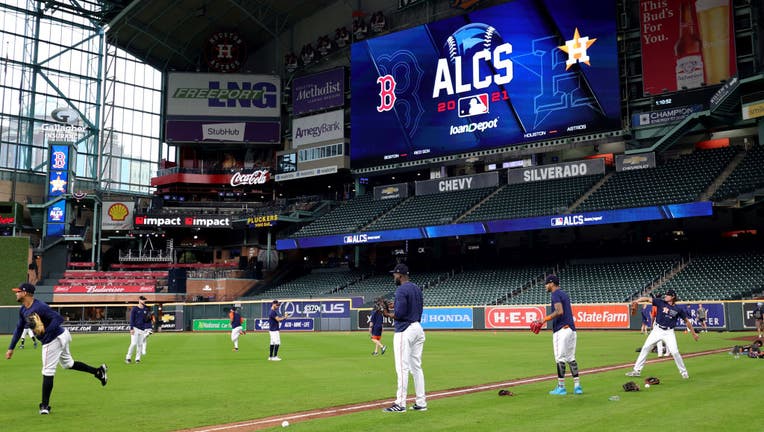 HOUSTON, TEXAS - OCTOBER 14: The Houston Astros participate in a workout prior to the start of the American League Championship Series against the Boston Red Sox at Minute Maid Park on October 14, 2021 in Houston, Texas. (Photo by Carmen Mandato/Gett

HOUSTON - The stadium was packed Friday for Game 1 of the American League Championship Series (ALCS) between the Houston Astros and the Boston Red Sox.

And despite a change with pitcher Lance McCullers Jr. being left off the roster due to a muscle strain, the Astros still came out on top 5-4!

Game 2 is set for Saturday. Game 3 and Game 4 of the best-of-seven series are scheduled for Monday and Tuesday in Boston.

Astros fans beyond excited after win in ALCS opener

After an electrifying win for the Astros in Game 1 scoring 5-4 against the Red Sox, fans were absolutely thrilled. FOX 26's Matthew Seedorff was in the midst of the celebrations at Minute Maid Park.

Carlos Correa paused a few seconds at the plate, tapping the spot on his wrist where a watch would be, after hitting a tiebreaking home run in the seventh inning that propelled the Houston Astros over the Boston Red Sox 5-4 Friday night in the AL Championship Series opener.

Altuve tied the game with a two-run shot in the sixth before Correa connected off losing pitcher Hansel Robles with two outs in the seventh to put the Astros ahead 4-3.

Correa, who has been with the Astros since being selected first overall in 2012, becomes a free agent at season’s end and it seems likely that he won’t remain in Houston.

Houston-native Sarah Grace will sing the National Anthem. The presentation of the colors will come from the Joint Services Color Guard.

Astros fans beyond excited after win in ALCS opener

After an electrifying win for the Astros in Game 1 scoring 5-4 against the Red Sox, fans were absolutely thrilled. FOX 26's Matthew Seedorff was in the midst of the celebrations at Minute Maid Park.

What to know for Game 2

The roof of Minute Maid Park will be closed for Game 2.

American Christian pop-rock and R&B artist Tauren Wells will sing the National Anthem. The presentation of the colors will come from the Houston Fire Department Honor Guard.

Celebrations for Houston Astros continue as they head to ALCS for fifth year in a row!

Astros fans are continuing the celebration from Tuesday night. Now, Houston is looking forward to the next series! FOX 26’s Natalie Hee has more.

Fans who have a ticket to the game can attend the Street Fest, which will begin three hours before Game 1 and Game 2. There will be live music, food trucks, games and more.

If you don’t have a ticket to the game, check out this list of watch parties around Houston.

LIST: Houston Astros fans can cheer on their favorite team at these watch parties! 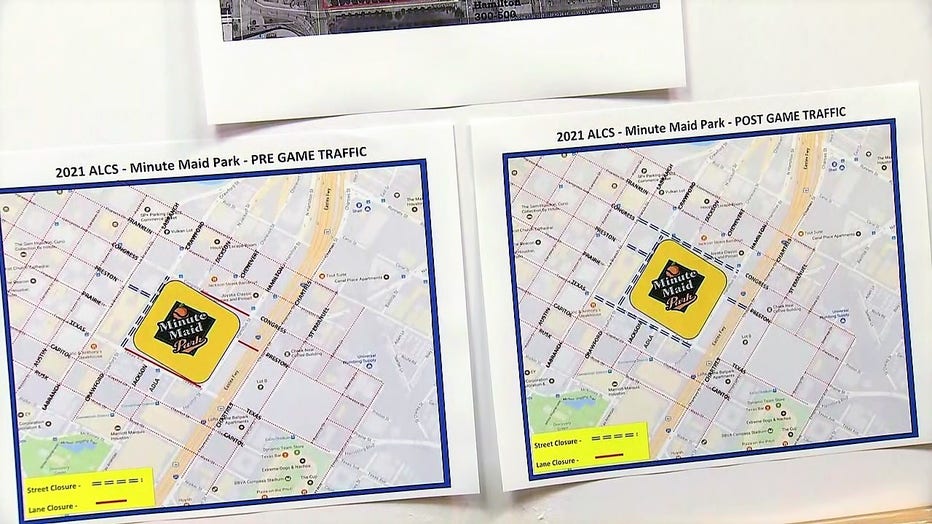 Maps of the street closures that will be in place around Minute Maid Park.

Whether you're trying to get to the game or just trying to get around downtown, there are some street closures you should know about. The Houston Police Department says the following closures will be in place:

• Crawford between Texas and Congress is closed for emergency vehicles only

• Congress between Hamilton and Crawford is restricted to two lanes

• Texas is completely shut down postgame between La Branch and Hamilton

• Preston is closed between La Branch and Crawford

How to watch the ALCS