WASHINGTON - The White House on Monday said the U.S. Centers for Disease Control and Prevention has been "unable to find legal authority" for a new eviction moratorium after a Supreme Court ruling and called on states and local governments to act in order to keep renters in their homes.

In a statement, the Biden administration said the CDC — who put the since-expired ban in place as part of the COVID-19 response — was "unable to find legal authority for a new, targeted eviction moratorium." But the White House noted that state-level efforts to stop evictions would spare a third of the country from evictions over the next month.

"Our team is redoubling efforts to identify all available legal authorities to provide necessary protections," White House Press Secretary Jen Psaki said in a statement, including a call on states and localities to extend or put in place evictions moratoria for at the least the next two months.

The nationwide eviction ban expired at midnight Saturday. Congress was unable to pass legislation swiftly to extend the ban, and as a result, House Democratic leaders issued a joint statement saying it was now up to President Joe Biden to act — urging him to extend the moratorium through Oct. 18.

The lawmakers called it a "moral imperative" to prevent Americans from being homeless amid another COVID-19 surge, even as the White House has suggested that congressional action is needed.

"Action is needed, and it must come from the Administration. That is why House leadership is calling on the Administration to immediately extend the moratorium," Pelosi, D-Calif., Majority Leader Steny Hoyer, D-Md., Whip James Clyburn, D-S.C., and Assistant Speaker Katherine Clark, D-Md., wrote in the joint statement published Sunday.

The lawmakers cited the highly contagious delta variant, which has fueled a recent uptick in virus cases and hospitalizations, as a reason to extend the eviction moratorium through mid-October.

The CDC’s ban was intended to hold back the spread of the virus among people put out on the streets and into shelters. It was extended several times during the course of the pandemic but finally expired on Saturday.

Biden previously announced that he would not extend the moratorium again in the wake of a Supreme Court ruling that suggested congressional action was necessary for another extension.

The Supreme Court voted 5-4 in late June to allow the broad eviction ban to continue through the end of July. One of those in the majority, Justice Brett Kavanaugh, said he agreed that the CDC had exceeded its authority when it put the ban in place, but nonetheless voted for it to remain because it was scheduled to expire soon.

Kavanaugh also made clear he would block any additional extensions unless there was "clear and specific congressional authorization."

The White House has maintained that Biden wanted to extend the moratorium but that concerns remained over challenging the court. Doing so could lead to a ruling restricting the administration’s ability to respond to future public health crises.

Still, some Democratic lawmakers said they were caught by surprise from Biden’s Thursday announcement and were left with only days to act before the ban expired. 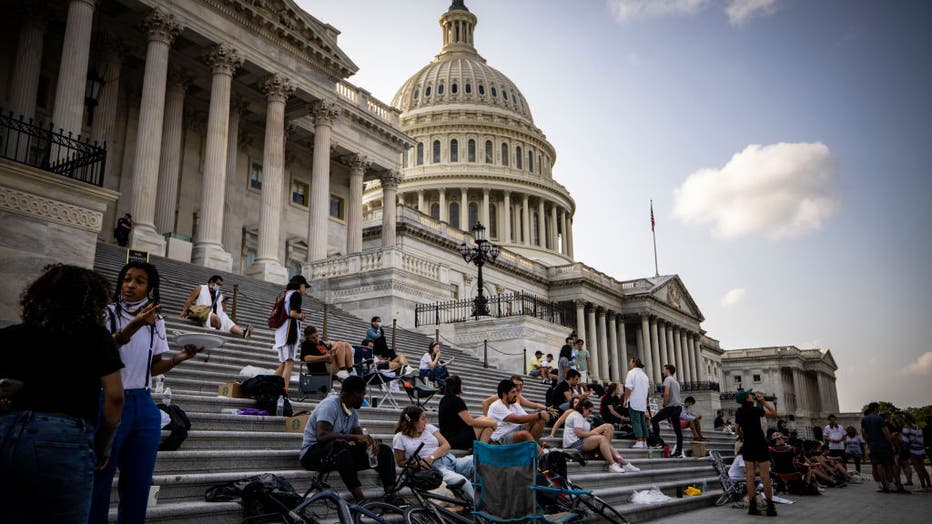 Activists occupy the steps to the House of Representatives with U.S. Rep. Cori Bush (D-MO) as they continue their protest for an extension of the eviction moratorium at the U.S. Capitol Building on August 1, 2021, in Washington, D.C. (Photo by Samuel

Rep. Maxine Waters, D-Calif., the chair of the Financial Services Committee, produced a draft of a bill that would require the CDC to continue the ban through Dec. 31. At a hastily arranged hearing Friday morning to consider the bill, she urged her colleagues to act. In the end, Democratic lawmakers had questions and concerns and could not muster support to extend the ban.

On Sunday, hours after the expiration, Rep. Alexandria Ocasio-Cortez, D-N.Y., said that Democrats had to "call a spade a spade" and pointed to her own party.

"We cannot in good faith blame the Republican Party when House Democrats have a majority," the progressive congresswoman said on CNN's "State of the Union."

Ocasio-Cortez and other Democrats joined Rep. Cori Bush, D-Mo., who camped outside the Capitol over the weekend in protest.

Mass evictions could potentially worsen the recent spread of the COVID-19 delta variant as roughly 1.4 million households told the Census Bureau they could "very likely" be evicted from their rentals in the next two months.

Another source of frustration for lawmakers is the slow pace of pandemic relief already approved by Congress — nearly $47 billion in federal housing aid to the states — getting to renters and landlords owed payments. Biden has called on local governments to "take all possible steps" to disburse the funds immediately.

In the statement, the White House on Monday said there is "no excuse" for any state or locality not to promptly distribute funding that Congress appropriated "to meet the critical need of so many Americans."

"This assistance provides the funding to pay landlords current and back rent so tenants can remain in their homes or apartments, not be evicted. No one in America should be evicted when Federal funds are available, in the hands of State and local government, to pay back rent due," the White House statement said.