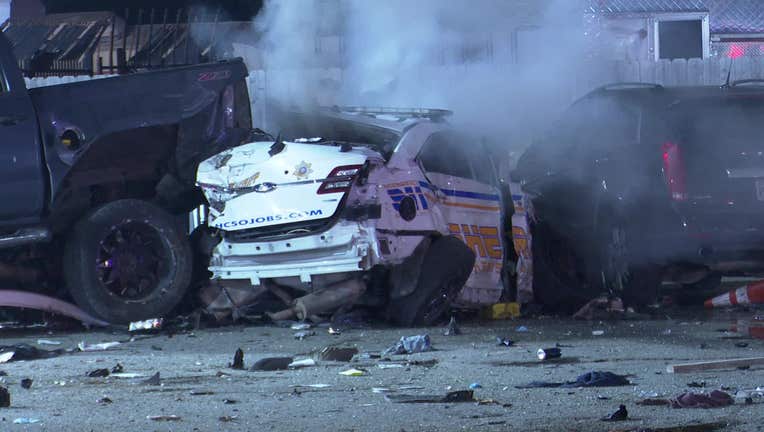 Several agencies investigate a deadly crash at the intersection of Laura Koppe Road and Lockwood Drive.

HOUSTON - The robbery suspect who led a Harris County deputy on a chase before a deadly crash in northeast Houston has been arrested, authorities say.

According to the U.S. Attorney's Office, 27-year-old DaVonte Williams was arrested, and charged with interference with commerce by robbery and brandishing a firearm in relation to a crime of violence.

Williams was reportedly out on bond for two previous cases of aggravated assault with a deadly weapon, according to the sheriff.

The crash at the intersection of Laura Koppe Road and Lockwood Drive on Wednesday night left a woman dead and several others in the hospital – including two children and the deputy.

According to the U.S. Attorney's Office, Williams robbed a CVS on Tidwell shortly after doing the same at an Exxon Mobil on Eastex Freeway on Wednesday. Williams allegedly entered the CVS wearing a red ski mask, pointed a handgun at an employee, and demanded cash. He then exited the store and entered a Lincoln Town car.

According to the charge complaint, law enforcement attempted to stop the vehicle, but the driver refused and began a high-speed chase.

Sheriff Ed Gonzalez with the Harris County Sheriff's Office says Williams was fleeing from a deputy when that deputy's car and an SUV collided in an intersection. Authorities say the patrol car and the SUV struck several other vehicles after the initial impact, with a total of seven vehicles involved in the crash.

After the initial collision between an HCSO patrol car and another vehicle, several other vehicles were also struck, authorities say. A woman died, and others – including two children and the deputy – were taken to the hospital. (Note: This report is from January 13, 2022, before the robbery suspect was arrested)

The woman driving the SUV was pronounced dead at the scene. Two other children, believed to be 2 and 5 years old, were transported to the hospital. One child was last reported to be in critical condition and the other child in stable condition.

Authorities say the robbery suspect fled the scene but a multi-agency collaboration led to his arrest.

If convicted, Williams faces up to 20 years in federal prison for the robbery. Upon any conviction relating to the gun charges, he must also serve a minimum of seven years that must be served consecutively to any other prison term imposed.

The Houston Police Department is leading the ongoing investigation into the crash.

"Our condolences go out the family of the female that lost her life during the crash. And we pray for the recovery of our deputy, the two small children, and everyone impacted by the crash," Sheriff Gonzalez wrote on Twitter.