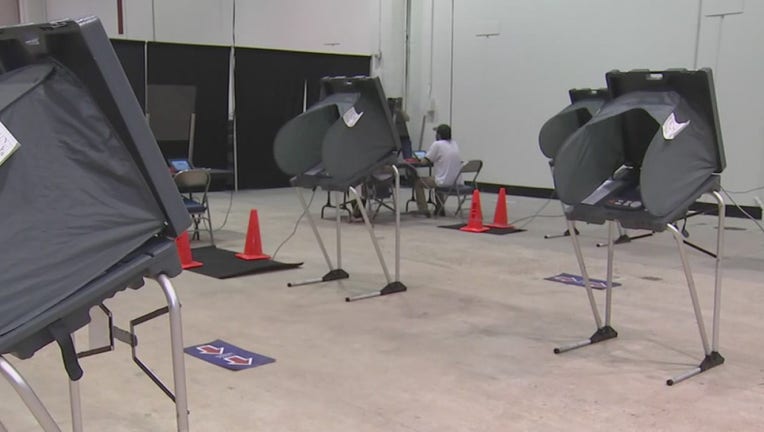 HOUSTON - All weekend, election judges swung by NRG Park to pick up supplies for voters on Election Day. Supplies included PPE like masks, finger covers and Plexiglass for election workers, as well as iPads, which will hold and secure all the important data.

"We tripled the number of early voting centers that were in Harris County from 2016. From just over 40 to 120. And the voters responded to that. When you make it easy for folks to vote, they vote more. We had more than 1.4 million registered voters here in Harris County come and made their voice heard during our early voting period, and nearly 10% of those in-person votes were through drive-thru voting," Hollins said.

On Sunday, the Texas Supreme Court rejected a GOP-effort to throw out 127,000 votes already cast at several drive-thru locations in Houston.

The case will now head to an emergency federal hearing Monday.

"We expect to win tomorrow. In setting up drive-thru voting, we followed the Texas election code, we consulted with the Texas Secretary of State, and they approved it. And we’ve done everything that we need to do to include a secure process, so that drive-thru voting is just as safe and secure as every other method of voting," Hollins said.

FOX 26 reached out to multiple Republican officials for a response to the lawsuit. However, many declined to comment due to the pending litigation.

During a Harris County Republican Get Out the Vote Rally, former Harris County District Clerk, Chris Daniel, who’s also running for Tax Assessor Collector, says he thinks the lawsuit is too late.

"We’re already in the middle of an election season. If this had happened in the very beginning like it should have, because I have serious questions about how they have taken advantage of curbside voting to create drive-thru voting, then we’d be having a different conversation. But at the end of the day, because of the fact that they’re in the middle of voting and voting is about to be finished on Election Day itself, it’s a question that needs to be settled on another day. And I have too many Republican friends and colleagues that actually like drive-thru voting," Daniel said.

Although the Harris County Clerk’s Office says they’re confident the law will be on their side come Tuesday, they are prepared with an alternative plan if the courts don’t rule in their favor.

"We’re always working to protect the voter, so we’re going to have ways for people to come in and expedited in and convey very clearly for what needs to happen for your vote to be counted," said Isabel Longoria, Harris County Elections Administrator.

All wait times for the 806 polling locations will be posted online at HarrisVotes.com, so voters can check before heading over.

Registered voters are allowed to cast their ballots anywhere in the county, all they need is a form of identification.