MINNEAPOLIS (FOX 9) - Tuesday marked one year since George Floyd was killed while being arrested by Minneapolis police officers.

Floyd died on May 25, 2020. Now-fired officer Derek Chauvin was convicted of his murder earlier this spring. The three other former officers charged in Floyd’s death will stand trial together next year. All four ex-officers are also facing federal charges for allegedly violating Floyd’s civil rights during the deadly arrest.

It was a feeling of celebration at George Floyd Square Tuesday afternoon on the first anniversary of George Floyd's death as community members joined together for music, food, art and reflection.

In the year since Floyd’s death, the intersection where he was killed—38th and Chicago—has become an international memorial to Floyd and a gathering place for the community. The intersection, now known as George Floyd Square, remains closed to traffic.

Tributes were held in Minneapolis and throughout the Twin Cities for George Floyd on the one-year anniversary of the day he lost his life to police.

People all over Minnesota and across the country remembered Floyd, whose death sparked a movement for racial justice  A number of events took place throughout Minneapolis on Tuesday, including a moment of silence.

It was a celebratory atmosphere at 38th and Chicago Tuesday on the one year anniversary of George Floyd's death, but attendees weren't satisfied with a guilty verdict in the case.

Charles McMillan, who testified in the trial against Chauvin last month, was spotted at 38th and Chicago Tuesday afternoon. He told FOX 9 it was a "good day of celebration."

Despite the largely positive tone of the day, shots were fired near the intersection of 38th Street and Chicago Avenue South just after 10 a.m. Tuesday. Officers learned a suspect vehicle was seen speeding away from the area. A short time later, a victim showed up at Abbott Northwestern Hospital suffering from a gunshot wound. The victim was transported to Hennepin County Medical Center, where they are in critical condition, but expected to survive, according to a police spokesperson.

Reporters at George Floyd Square covering the anniversary of Floyd's death heard gunshots ring out near the intersection Tuesday morning.

Celebration of life and remembrance at The Commons

Community members commemorated the one year anniversary of the death of George Floyd with a celebration of life at Commons Park. The festivities were upbeat and positive, but speakers renewed calls for action.

The George Floyd Memorial Foundation hosted a day-long celebration at The Commons in Minneapolis featuring special guests and musical performances as well as locally-owned business by hosting a food truck alley and vendor expo. The goal, organizers said, was to "celebrate life through Black culture, art and history."

George Floyd's family marks anniversary of his death in Minneapolis

Several members of George Floyd's family joined the celebration of life at The Commons in Minneapolis Tuesday to mark one year since Floyd was killed while being arrested by Minneapolis police.

The day-long event will included community art and children’s activities, along with an open mic session and concerts featuring Grammy Award-winning Sounds of Blackness and notable local DJ Sophia Eris at 6 p.m., ending with a candlelit vigil honoring Floyd at 8 p.m.

Greg McMoore, a longtime south Minneapolis resident, said he feels an attitude of desperation in the community, which he hopes brings about lasting change.

Gov. Tim Walz asked Minnesotans to take a moment of silence at 1 p.m. Tuesday for 9 minutes and 29 seconds—the length of time Chauvin kneeled on Floyd’s neck and back during the deadly arrest. 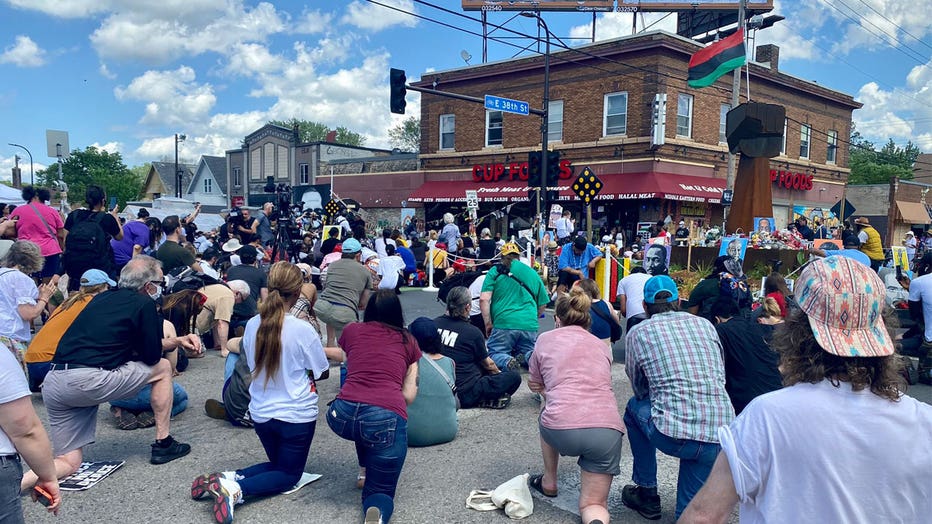 A moment of silence at 38th and Chicago on the 1-year anniversary of George Floyd's death.

Several of Floyd’s family members, including his sister Bridgett Floyd, participated in the moment of silence at the celebration at The Commons in Minneapolis. They were joined by Minneapolis Mayor Jacob Frey, who gave brief remarks, telling the crowd police brutality cannot continue and "we all have to make the change.

Minneapolis Mayor Jacob Frey joined the family of George Floyd at The Commons park Tuesday for a moment of silence to mark the one-year anniversary of George's death. George was killed on May 25, 2020 while being arrested by Minneapolis police officers.

Bridgett Floyd said she did not join her family members in Washington, D.C. today because the George Floyd Justice in Policing Act has not been passed.

"We need that bill passed," she said. "We don’t want no watered down bill."

Minneapolis woman works to save plywood artwork after Floyd's death

Leesa Kelly of Minneapolis made it her goal to save as much of the plywood artwork from through Minneapolis that went up in the months following George Floyd's death.