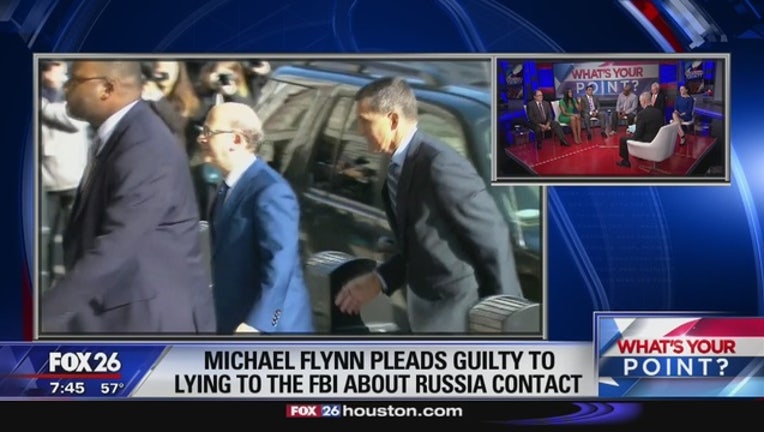 Houston (FOX 26) - Special Counsel Robert Muellers investigation into Russian meddling has produced a criminal conviction as Michael Flynn pleads guilty. White House attorneys claim Flynn's admission of criminal wrongdoing in no way implicates any one else in the Trump administration.

President Donald Trump on Friday denied he wants to oust Secretary of State Rex Tillerson, calling reports to that effect "fake news," as his top diplomat brushed off speculation that he has lost the confidence of the White House.

Comey testified before Congress in June that Trump asked him if could see to "letting Flynn go." Comey said that request came a day after Trump forced Flynn to resign his White House post.

Flynn pleaded guilty on Friday to lying to the FBI and agreed to cooperate with special counsel Robert Mueller's investigation into Russian meddling in the 2016 election. Trump fired Comey as FBI director in May.

WASHINGTON (AP) - President Donald Trump changed his story Saturday on why he fired Michael Flynn as his national security adviser, now suggesting he knew at the time that Flynn had lied to the FBI as well as to Vice President Mike Pence about his contacts with Russians during the presidential transition.

That was a turnabout from his initial explanations that Flynn had to go because he hadn't been straight with Pence about those contacts. Lying to the FBI is a crime, and one that Flynn acknowledged Friday in pleading guilty and agreeing to cooperate with the special counsel's Russia investigation.

Trump's tweet: "I had to fire General Flynn because he lied to the Vice President and the FBI. He has pled guilty to those lies. It is a shame because his actions during the transition were lawful. There was nothing to hide!"

Amid questions raised by the tweet, Trump associates tried to put distance Saturday evening between the president himself and the tweet. One person familiar with the situation said the tweet was actually crafted by John Dowd, one of the president's personal attorneys. Dowd declined to comment when reached by The Associated Press on Saturday night.

In another email wrinkle in the investigation into Trump's ties to Russia, The New York Times reported Saturday that emails among top Trump transition officials suggested that Flynn was in close contact with other senior members of the transition team before and after he spoke to Russian Ambassador Sergey Kislyak. A Dec. 29 email from K.T. McFarland, a transition adviser to Trump, suggested that Russian sanctions announced by the Obama administration had been aimed at discrediting Trump's victory.

She wrote the sanctions could also make it more difficult for Trump to ease tensions with Russia, "which has just thrown the U.S.A. election to him," she wrote in the emails obtained by the Times. A White House attorney told the newspaper McFarland only meant that Democrats were portraying it that way.

It's unclear why Trump would cite lying to the FBI as a reason for firing Flynn. Doing so suggests the president knew at the time that Flynn had done something that is against the law, and therefore the investigation could not be as frivolous as he's been portraying.

It's also unclear how he would know that, if information about Russian contacts had not reached him, as he has been implying in his own defense.

Flynn left the White House in February, only acknowledging that he had given an incomplete account to Pence of his conversations with Kislyak. After Trump forced Flynn out, he asked FBI Director James Comey to end the bureau's probe in the matter, according to Comey's account. Comey refused, and Trump fired him, too.

Then-White House spokesman Sean Spicer said after Flynn's firing that it was the result of a "trust issue" and the White House counsel's office had determined there was not a legal issue.

"Whether or not he actually misled the vice president was the issue, and that was ultimately what led to the president asking for and accepting the resignation of Gen. Flynn," Spicer told reporters on Feb. 14. "That's it, pure and simple. It was a matter of trust."

Trump has been publicly dismissive of Comey and of special counsel Robert Mueller's continuing investigation, and was often generous in his appraisal of Flynn, except to say his adviser could not stay on the job after misleading his vice president.

At the time, Pence said Trump was justified in firing Flynn because Flynn had lied to him. Neither Trump nor Pence indicated concern then that the FBI had not been told the true story.

Pence, who served as head of Trump's transition, has not publicly commented on Flynn's plea.

Trump turned to Twitter again later Saturday night, railing about why Flynn was prosecuted but his Democratic opponent Hillary Clinton, was not for her alleged misdeeds.

He tweeted: "So General Flynn lies to the FBI and his life is destroyed, while Crooked Hillary Clinton, on that now famous FBI holiday "interrogation" with no swearing in and no recording, lies many times...and nothing happens to her? Rigged system, or just a double standard?"

He then added: "Many people in our Country are asking what the "Justice" Department is going to do about the fact that totally Crooked Hillary, AFTER receiving a subpoena from the United States Congress, deleted and "acid washed" 33,000 Emails? No justice!"

It is nonetheless a crime to lie to the FBI about any material fact in an investigation. Comey has said Clinton did not lie to the FBI during her interview.

WASHINGTON (AP) - President Donald Trump on Friday denied he wants to oust Secretary of State Rex Tillerson, calling reports to that effect "fake news," as his top diplomat brushed off speculation that he has lost the confidence of the White House.

As Tillerson went about his normal schedule of diplomatic activities, including two meetings with Trump, the president said his secretary of state is "not leaving."

"The media has been speculating that I fired Rex Tillerson or that he would be leaving soon - FAKE NEWS!" Trump tweeted. "He's not leaving and while we disagree on certain subjects, (I call the final shots) we work well together and America is highly respected again!"

The tweet was Trump's strongest endorsement of his top diplomat since senior White House officials on Thursday began telling reporters that a plan had been devised to push Tillerson out and replace him with CIA chief Mike Pompeo. Immediately after reports of the plan emerged, Trump offered only tepid support for Tillerson, noting only that he was at the White House for a previously scheduled meeting.

The halfhearted backing amid the swirl of speculation over Tillerson's imminent demise had threatened to impair his effectiveness, particularly as he prepares for an official trip to Europe next week.

On Friday, Tillerson attended two meetings at the White House with Trump - one with Libya's visiting prime minister and then a lunch with the president and Defense Secretary James Mattis. Before those meetings, Tillerson told reporters at the State Department that speculation he was on his way out was "laughable."

Tillerson aides had said the secretary was sanguine and remained comfortable in his role despite the turmoil in Trump's national security team centering on him. Aides said Tillerson would continue to serve until the president asked him not to and stressed that such a request had not been made.

The officials were not authorized to discuss the matter publicly and spoke on condition of anonymity.

Although Tillerson looks safe for now, he will be losing a senior aide and conduit to the public in coming weeks.

The departure of Hammond, one of the few senior Tillerson aides who was accessible to journalists, may hurt the department's already difficult task of defending the secretary against a slew of negative reports about his leadership, particularly after senior White House officials amplified them Thursday.

According to senior White House officials, the plan centered around replacing Tillerson with Pompeo, which would have led to a major realignment early in Trump's term. It would create a vacancy atop the CIA that officials said could be filled by Republican Sen. Tom Cotton of Arkansas.

Such an overhaul could produce a significant shift in both the tone and direction of the president's foreign policy, removing it from the understated former oil man whose style has never fit well with Trump's.

It is exceedingly rare for a secretary of state, America's face on the global stage, to be fired or to serve for a year or less. Nor is it common for presidents to have such a significant Cabinet revamp so soon after taking office.

"There's no question this is incredibly damaging to whatever credibility the secretary had left," said Derek Chollet, a former State Department, Pentagon and National Security Council official in the Obama administration.

Friction between the president and the nation's top diplomat has grown increasingly public through the year.

After a report in October that Tillerson had called the president a "moron," Tillerson appeared before cameras to pledge fealty to his boss. Soon after, Trump publicly challenged his secretary to an IQ match.

For Tillerson, who left his job as Exxon Mobil's CEO, a premature departure from the Cabinet has seemed increasingly inevitable.

When Tillerson was tapped for the job late last year, many Trump critics expressed quiet relief that he'd picked a sober "adult" who could form a counterweight to the president's brasher, more impulsive approach, especially on critical matters of war and peace.

Yet divisions on key foreign policy issues emerged quickly, and Trump has repeatedly undermined Tillerson by voicing positions at odds with his.

When Tillerson in June called on Arab nations to ease their blockade on Qatar, Trump hours later lambasted Qatar for funding terrorism. Trump also deemed diplomacy with North Korea a waste of time, when Tillerson was pursuing just that. Tillerson's advice to Trump to stay in the Paris climate deal and certify Iran's compliance with the nuclear deal was similarly overruled.