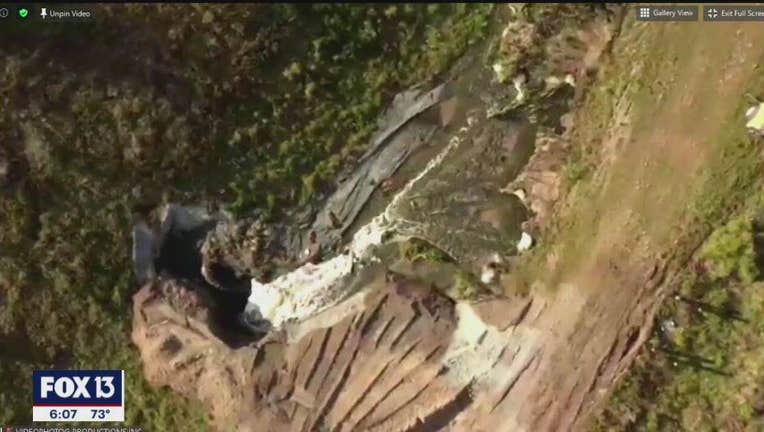 PALMETTO, Fla. - Officials in Florida said Sunday that crews were working to prevent the collapse of a large reservoir leaking in the Tampa Bay area and holding some 300 million gallons of water. The area has been evacuated, including hundreds of inmates at a county jail, to avoid a "catastrophic flood."

An uncontrolled breach at the old phosphate plant reservoir has the potential to spill out 340 million gallons of water in a matter of minutes, risking a 20-foot-high wall of water, according to Manatee County officials.

"What we’re looking at now is trying to prevent and respond to, if need be, a real catastrophic flood situation," Florida Gov. Ron DeSantis said at news conference on Sunday.

DeSantis flew over the old Piney Point phosphate mine earlier Sunday, which covers 79 acres and is part of a system of ponds. The governor declared a state of emergency Saturday for the area to "ensure resources are allocated for necessary response and recovery."

An initial leak was reported in March, and crews have been discharging water since at the site. But on Friday, a significant leak was detected — escalating the response. A portion of the containment wall in the reservoir shifted, leading officials to fear a collapse could occur at any time.

Officials said Sunday that roughly 2-3 million gallons of water per day have been flowing through the leak for the past week.

A total of 316 homes remained under an evacuation notice Monday in Manatee County, FOX 13 Tampa reports, while many nearby businesses have also been asked to evacuate.

Additional pumps were airlifted in over the weekend by the Florida National Guard and were expected to help drain the water in a controlled release into Tampa Bay. Officials estimated that the additional pumps will help discharge 23,500 gallons of water per minute, or 33 million gallons of water per day into Tampa Bay at Port Manatee, according to FOX 13.

"With the additional pumps, we will be able to nearly double the amount of water we are taking out," said Manatee County Acting Administrator Scott Hopes. "The controlled release is working, the breach release is traveling in the direction we had anticipated and planned for, so we believe that probably by Tuesday we are going to be in a much better position and the risk level will have decreased significantly with the governor’s assets."

On Sunday afternoon, Manatee County Sheriff’s officials began evacuating about 345 inmates from a local jail about 1 mile away from the first floor in case of a breach. Hopes said models show the area could be covered with between 1 foot to 5 feet of water, and the second floor is 10 feet above the ground.

The Florida Department of Environmental Protection says the water in the pond is primarily saltwater mixed with wastewater and stormwater. The agency says it has elevated phosphorous and nitrogen levels and is acidic, but not expected to be toxic, the agency says. The Piney Point plant is a former fertilizer plant that has been closed for decades.

DeSantis also vowed to hold HRK Holdings, which manages the Piney Point phosphogypsum stack, accountable for the breach. "This is not acceptable," he said.

County officials say well water remains unaffected and there is no threat to Lake Manatee, the area’s primary source of drinking water.

"Manatee County Utility customers can rest assured that their drinking water is completely safe to drink. The water distribution system is a closed system without any way for flood water to enter. There is also no threat to our primary source of drinking water, Lake Manatee," said Vanessa Baugh, the chairwoman for the Manatee County Commission.

Experts said even if a breach occurs, the layers of dirt will filter any of the harmful nutrients from the water, FOX 13 reports.