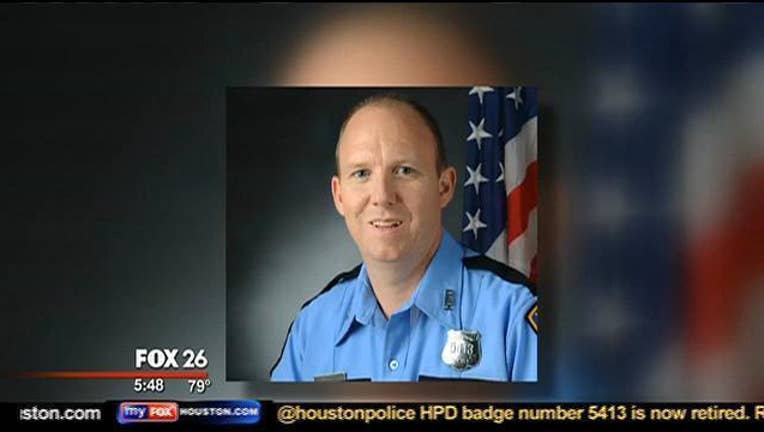 By the hundreds they gathered at Grace Community Church, those who wear the badge and those who respect the price it sometimes demands.

"A true hero who gave his life in the line of duty," said Monty Montgomery, Houston Police Department Chaplain.

That sacrifice came from officer Richard Keith Martin as he was struck and killed by a fleeing car jacker who had fired on fellow policemen.

West side Officer Xavier Flores served at his side.

"Richard acted without hesitation to make a tough decision by performing a selfless act of bravery. He had the courage to stand alone in the attempt to stop a dangerous felon," said Flores.

A U.S. Air Force veteran who spent 20 years in the business world, Martin enlisted in the Houston Police Department at the age of 43.

Friends and family called it the realization of his lifelong dream to protect and serve.

"You know, he was my Superman. I never thought this would happen," said Cynthia Martin, Richard's daughter.

"Whenever you needed a helping hand he was always there no matter the time or place Richard was always ready and willing to help others," said Flores.

Silenced by sorrow, Martin's son Tyler asked his heartfelt words be read for all to hear.

"I love you for everything you have ever done for me. You are a great Dad and a hero to a lot of people," he wrote.

33 year old Jeffrey Conlin, the suspect responsible for Martin's death, took his own life with a gunshot to the head.

Those interested in aiding Martin's survivors are asked to contribute to the 100 Club.