Amid criticism for not removing or labeling political posts that spread misinformation, Facebook is launching a massive effort to boost voter turnout and show authoritative information about voting.

Facebook announced Wednesday it is banning ads that “praise, support or represent” QAnon and any militarized social movements on the platform.

Facebook is ramping up efforts to combat fake stories on its platform ahead of the November presidential election, including banning ads trying to delegitimize the election results. 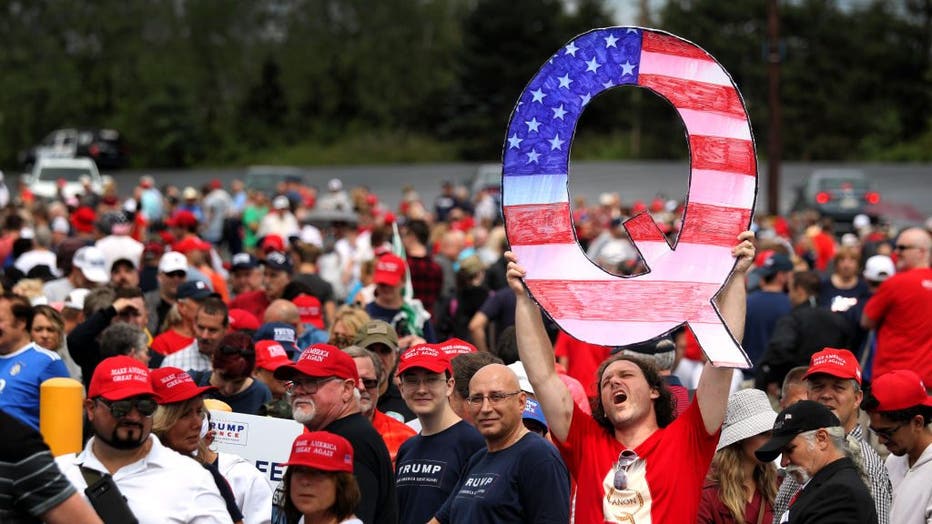 David Reinert holds up a large "Q" sign while waiting in line to see President Donald J. Trump at his rally on August 2, 2018 at the Mohegan Sun Arena at Casey Plaza in Wilkes Barre, Pennsylvania. "Q" represents QAnon, a conspiracy theory group that

A few weeks ago, it announced it would ban political ads in the last week of the campaign to clamp down on disinformation, which ran rampant in the 2016 election and was taken advantage of by Russian operators.

A reporter asked the president about what he thinks of QAnon, a convoluted, right-wing, pro-Trump conspiracy Theory, to which Trump replied that he appreciates that the movement supports him.

Facebook said it is aware that QAnon is also using hashtags like #savethechildren to recruit and organize, alluding to the conspiracy theory that supposes most liberal leaders are Satan-worshipping sex traffickers. “Starting today, we will direct people to credible child safety resources when they search for certain child safety hashtags.”

In August, Facebook removed hundreds of pages and groups linked to QAnon.