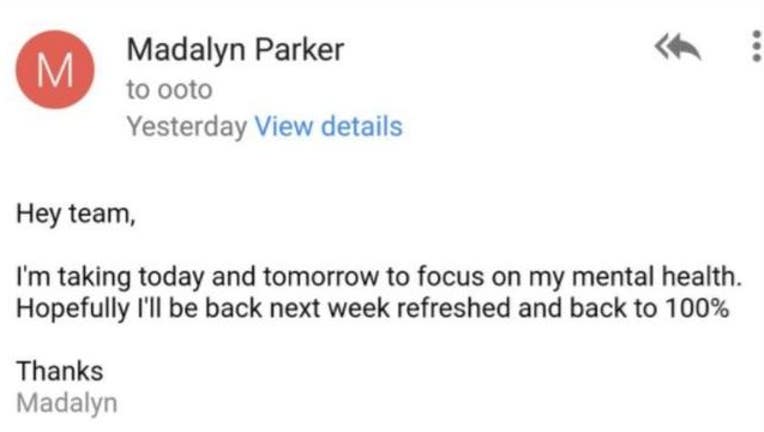 Madalyn Parker, a web developer at Olark Live Chat, emailed her colleagues at the end of June to let them know she’d be taking two days off to focus on her mental health.

“Hopefully I’ll be back next week refreshed and back to 100%” Parker wrote in the email.

In an unexpected turn of events, CEO Ben Congleton replied directly to Parker, thanking her for shining a light on mental health.

“I use (your email) as a reminder of the importance of using sick days for mental health – I can’t believe this is not standard practice at all organizations,” Congleton wrote.

Parker went on to share screengrabs of the email exchange on Twitter. The tweet, posted on June 30, has since been retweeted more than 11,000 times as of Tuesday.

Congleton was praised by some Twitter users for the refreshing response.

“Great to see such understanding from executive management,” one Twitter user wrote.

The CEO took the email exchange a step further, writing about mental health in the workplace on Medium.

He urged other company leaders to “empower and motivate” their teams by “expressing gratitude” to their employees and reflecting on their business values.

One in five adults in the United States experiences mental illness every year, according to the National Alliance of Mental Illness.