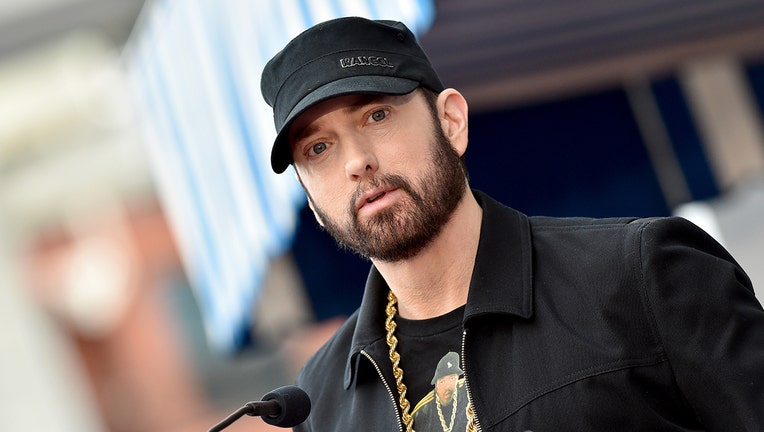 HOLLYWOOD, CALIFORNIA - JANUARY 30: Eminem attends the ceremony honoring Curtis "50 Cent" with a Star on the Hollywood Walk of Fame on January 30, 2020 in Hollywood, California. (Photo by Axelle/Bauer-Griffin/FilmMagic)

Eminem has given back to the city that raised him several times in his lifetime but now he's given to the men and women working the frontlines on the fight against COVID-19 by giving employees at Henry Ford Health System some 'Mom's Spaghetti'.

On Tuesday, Eminem dropped off cups of spaghetti to the workers at a Henry Ford Hospital. Which location within the Henry Ford Health System received the donation isn't known but the hospital's Instagram page posted a picture of 'Mom's Spaghetti' and thanking Eminem for the donation: Our #HealthcareHeroes “lost themselves” in the delicious Mom’s Spaghetti donated by Detroit’s very own, @eminem. Thank you for providing a special meal for our team members! 🍝

Of course, 'Mom's Spaghetti' is a reference from perhaps Eminem's best-known song, "Lose Yourself" from 8 Mile: "His palms are sweaty, knees weak, arms are heavy/There's vomit on his sweater already, mom's spaghetti/He's nervous, but on the surface he looks calm and ready/To drop bombs, but he keeps on forgettin.’"

This isn't the first time Eminem has used 'Mom's Spaghetti'. In December 2017, he opened a pop-up at the Shelter in Downtown Detroit where he encouraged people to "Come vomit up some spaghetti."

Eminem has not posted anything on his social media to confirm the donation of the food but the spaghetti has a label that reads 'Thank you Frontline Caregivers' and has a Shady logo on the bottom.

Detroit is the epicenter of Coronavirus in Michigan with more than 8,000 cases and almost 750 deaths in the city alone.