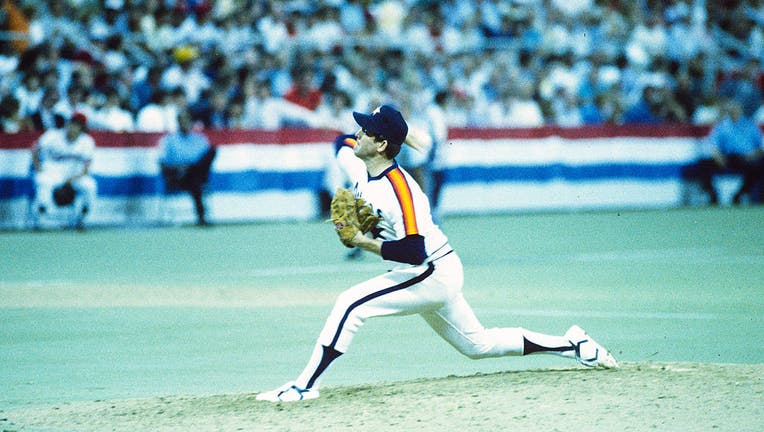 MINNEAPOLIS, MN - JULY 13: Nolan Ryan #34 of the Houston Astros pitches during the 56th MLB All-Star Game against the American League at the Hubert H. Humphrey Metrodome, on Tuesday, 16, 1985 in Minneapolis, Minnesota. (Photo by MLB via Getty Images)

Nolan Ryan was already striking out plenty of batters with his blazing fastball, and at age 22 pitched the last seven innings in the National League pennant-clinching game for the 1969 Miracle Mets and got what would be his only World Series ring.

If not for the encouragement and insistence of his wife to keep pitching, those could have been the few highlights of Ryan’s career.

"Without Ruth ... he might not have pitched for 27 years," said Bradley Jackson, the director of "Facing Nolan," a new documentary on Ryan.

And there wouldn’t have been a first-ballot Hall of Fame career spanning those record 27 seasons, none of the seven no-hitters, and less than one-tenth of his 5,714 strikeouts and 324 wins. The right-hander who routinely threw more than 100 mph wouldn’t have become the first baseball player with a $1 million annual salary, or pitch for both MLB teams in the Lone Star State.

"Facing Nolan" makes its national debut with a one-night showing on 850 screens in theaters across the country Tuesday, and the 105-minute documentary will be available for streaming later this year.

There was a public showing following a Texas Rangers home game on May 1, the anniversary of Ryan’s seventh no-hitter in 1991 at age 44 and two seasons before he retired.

"When I watch the film, I really kind of reflect back on how long 27 years is," said Ryan, now 75. "It almost made me tired, and the commitment that I had to make to compete for that long. But I took a lot of pride in being in shape and being able to compete with people that were half my age."

The documentary shows plenty of highlights from Ryan’s playing career. There are interviews with Hall of Fame players like George Brett, Rod Carew and Dave Winfield who had to face him, and fellow pitchers like Randy Johnson and Roger Clemens who admired him.

There is a segment filmed in the Astrodome with Craig Biggio, whose Hall of Fame career was mostly at second base, but was a 22-year-old catcher in his fourth big league game when he caught Ryan there in June 1988.

Carew, a .328 career hitter with seven batting titles and an All-Star in 18 of his 19 big league seasons, said he always felt like he would go 0 for 4 when facing Ryan. They were teammates in 1979, Carew’s first with the California Angels and Ryan’s last there before his million-dollar-a-year free agent deal with Houston.

Among stories discussed are the bloody lip — and blood-stained jersey —— after a comeback liner hit by Bo Jackson, and the headlock and punches delivered by Ryan when a young Robin Ventura decided to charge the mound against the Texan with the Rangers in his final season. Ventura declined to be interviewed for the documentary.

There is also plenty about Ryan’s youth and his family, including his relationship with his high school sweetheart who has now been his wife for 55 years, and also convinced him to take part in the film project.

"I really thought that it would be more focused on on my career and what happened in my career. And I really didn’t know what to expect," Ryan said. "I guess I really never even thought about the family aspect of it and the involvement with our children and our grandchildren. And I’m really thrilled that they did that.

Still, the dozens of big league records he holds and lifetime statistics are mind-boggling. He struck out one out of every four batters he faced in his career, with 839 overall more than Johnson. Ryan also holds modern-day big league records with his 2,795 walks (962 more than second-place Steve Carlton) and 277 wild pitches. His 222 compete games included 61 shutouts and 12 one-hitters to go with the no-hitters.

"The number of years that he pitched ... that’s insane," said Angels manager Joe Maddon, who never expects to see numbers like that again. "I don’t know it could ever, will be permitted to be accomplished again is the best way to describe it. Guys like that, when they came up, it was normally a four-man rotation, and sometimes five. They pitched on less rest and threw more pitches."

Maddon said pitchers like Ryan, Bob Gibson, Sam McDowell were physical anomalies. Maddon was a young scout in the Angels organization when Ryan was overpowering guys and the average big league velocity was about 88 mph. That is about 93 mph today, still well below what Ryan did throughout his career.

The active major league strikeout leader is Max Scherzer with 3,079, just ahead of the 3,054 Justin Verlander, the 39-year-old whose 231 wins were the most among active pitchers going into Thursday’s games. Only five other current pitchers have more than 2,000 strikeouts. There were only 50 complete games combined in the big leagues all of last season, with only eight pitchers having more than one.

"I think we have a gap, and with the young people today, that they don’t put a lot of emphasis or think about history," Ryan said when asked what he hoped people would get out of the film. "I think that gives them an opportunity to kind of see what happened, and how the game has evolved to where it is today versus where it was back when I started."