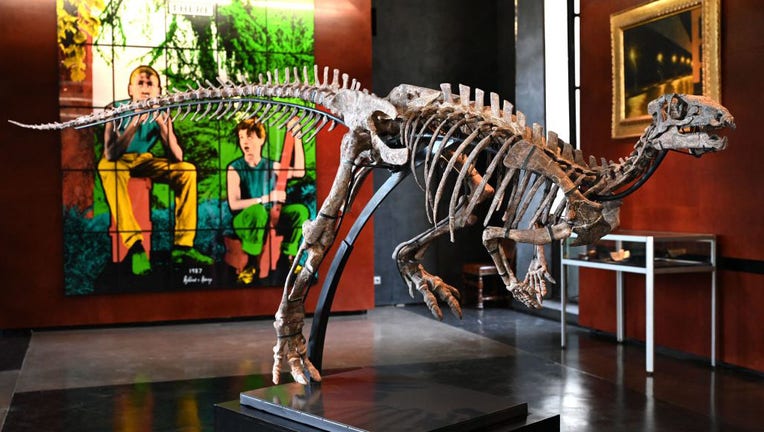 This photograph taken in Paris on Sept. 7, 2022, shows the fossilized skeleton of a Zephyr, a dinosaur of the iguanodon family that lived over 150 million years ago, displayed next to Gilbert & George artwork "There", during a press meeting ahead

PARIS - A small dinosaur skeleton is hitting the auction block next month.

The skeleton, which is being auctioned off in Paris, is expected to sell for about $495,000, according to Reuters.

DINOSAUR SKELETON TO BE AUCTIONED IN NYC, FOSSIL IS 76 MILLION-YEARS-OLD

"It's a dinosaur for a living room," Alexandre Giquello, an auctioneer, told Reuters in reference to the skeleton’s size.

Italian expert Iacopo Briano presents the fossilized skeleton of a Zephyr, a dinosaur of the iguanodon family that lived over 150 million years ago, during a press meeting in Paris on September 7, 2022, ahead of the auction to be held on October 20, 2022, at the Paris auction house Drouot. (Photo by BERTRAND GUAY/AFP via Getty Images)

The dinosaur was believed to have lived more than 150 million years ago, Reuters reported.

It was discovered in Colorado in 2019 on private land, and it was restored by Italian paleontologists, according to the outlet.

"Baby Yingliang" is a well-preserved fossilized dinosaur egg that has given scientists another link between prehistoric creatures and modern birds. (Credit: Yingliang Stone Nature History Museum via Storyful)

The auction will be held on Oct. 20 at the Drouot auction house, according to the Giquello website.